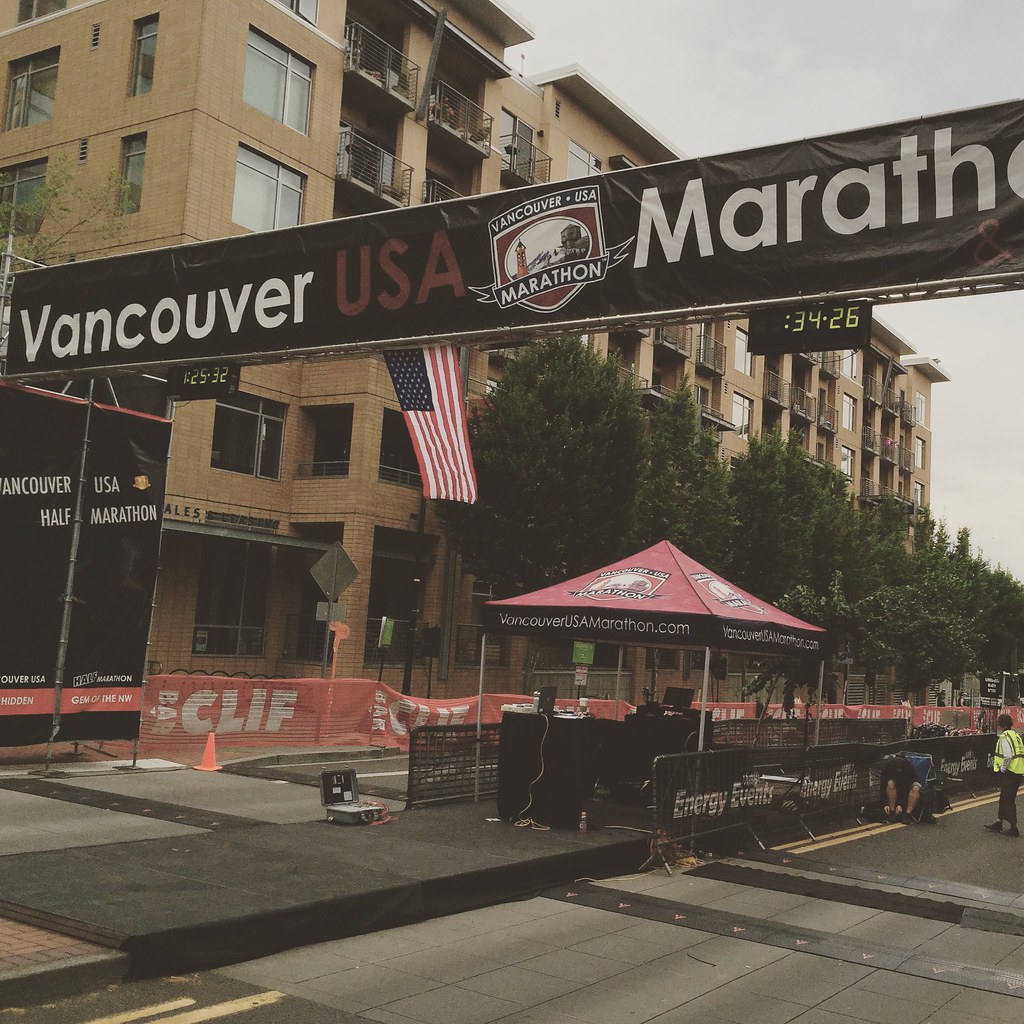 ...[T]he Vancouver USA Marathon Weekend will always hold a special place in my heart. Back in the day, when I had reached the point of no return (and ballooning up to about 45 pounds more than I wanted), I started my running journey. Now, after a myriad of 5k-15k/s, one duathlon, one triathlon, a 20-miler, and a full marathon, my 35th half marathon is upon me - the 2015 Vancouver USA Half Marathon. And thing that both myself AND the race share is that the 2011 event was the first for both of us.

And I honestly could not have had a better time. We lucked out with perfect running conditions for this year's event. Even though I'm relatively close by (all things considered), I don't venture to Vancouver much to run.  I think one of the best ways to experience another city is to run it, even better when you have a safe course planned out with streets closed for you and limited traffic.  The races run through some great areas like the downtown corridor, through Fort Vancouver and alongside the Columbia River (and the full goes up Frenchman's Bar).

The half marathon got underway at 9AM, a full 2 hours after the start of the full marathon. There was a palpable energy and the air as runners could see the line of spectators alongside the starting chute for the first 200 meters or so. The King (or perhaps just an Elvis impersonator) “graced” us with a surprisingly solid rendition of the Star Spangled Banner (see what I did there?) before runners took off – on time even. Energy Events did a great job sending groups out in waves. It sounds so simple and other runs obviously do this, but for the VUM they actually ran tape across to mark the pace groups, making participants commit to a time.  It made the start very pleasant.

Starting at the Esther Short Park, we headed out through city streets for the first mile. These streets were flat and quiet – and not all that scenic, as the most enjoyable structure was probably the Clark County Clerk Office. The later start time allowed some city residents to line the streets in their neighborhoods and cheer on runners. At mile 1, we merged with the marathon runners who were now completing their final 13 miles alongside us.

If I remember correctly, at this point back in 2011, we all just came together in one pack at that point. I remember it being a bit disjointed as half runners were still feeling great and pushing pace, while marathoners were 2+ hours into their race – tired and slower. This caused half runners to have to swerve in and out of the marathoners and having them (most likely) looking at us half participants with disdain. However, this year, there was a marked delineation of ribbon across the center lane that separated the 2 distances that continued for over a mile. This really nullified all congestion issues and I really appreciated the forethought.

A decline down Fort Vancouver Race led to one of my favorite areas – the tree-lined stretch through Officer’s Row and a secondary downhill into Fort Vancouver Park. The flat (and subsequent downhill) beginning miles made time fly by. I was keeping a slower than normal pace, but I was VERY comfortable. Luckily, I remembered that I was in store for a few hills around mile 5. In 2011, I remember being hit like a ton of bricks at that point, by I was mentally and physically prepared. I also remembered that, while the first hill was steep, there was a second more sustained climb just after mile 6. With that knowledge in hand, things didn’t seem so bad.  There were plenty of volunteers and support along the way (both at hills and elsewhere) and I found consistent aid stations every two miles and port-a-potties along the course. At my pace, I did not experience any issues with keeping the stations stocked.

The run along the Columbia is always a treat. In 2011, I believe there were weather and construction issues that led to only a brief trek along the river. With these updated over the past few years, the river views were sustained and the new parks were great. I have never been to the area near Tomahawk Bar, and mentally marked it down as somewhere I would like to return.

The final stretch tests mental and physical capacities, as there are some climbs 1) to get over the highway, and 2) to climb back up Fort Vancouver Way for a short stint. But the final half mile is a straightaway jaunt back to the finisher’s chute alongside Ester Short Park. Spectators line the street once again and it’s a fun stretch to the end.

It’s never too early to start planning events, but if you’re looking for a convenient marathon or half, and haven’t participated in this event (or even if you have), the Vancouver USA Marathon is a great option.  With the proximity to the Portland area, as well as being a mostly flat course with solid volunteers, this is a great run. Finishers got a complimentary entry into the Summer Brewfest, which is something I strongly appreciate. Vancouver is increasing its brewery numbers on seemingly a monthly basis and they dominated the brewfest landscape – as they should be.

I enjoyed the medal – which appeared to be a version of the starting line at the inaugural event – which resonated EVEN more with me! I also love the shirt (and am loving the movement back towards cotton blend t-shirts I will actually wear). All things considered, the Vancouver USA Marathon definitely reminded me what a good time I had in 2011 and how my life was guided down a completely separate path as a result. It was good to be back.

2 Comments on A return to where it all started: A Run Oregon recap of the 2015 Vancouver USA Half Marathon