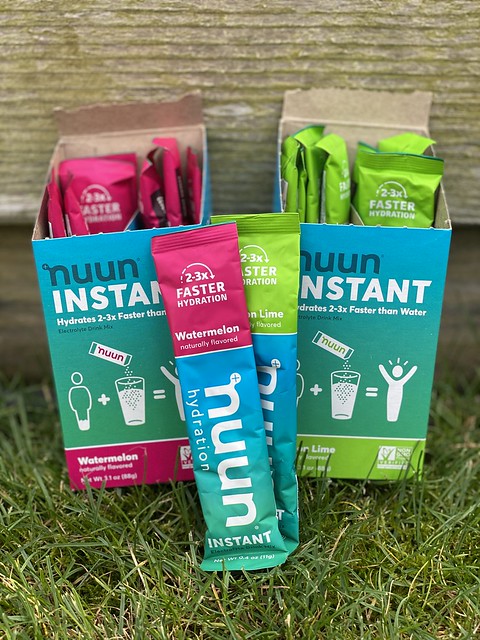 As someone who hasn’t really spent much time on hydration, except water, until this past year, I have really come to enjoy and appreciate nuun. As I have been spending more time running in more distant locations, as well as on the treadmill in my constantly warm garage, staying energized and fueled up has been essential. I have tried a ton of different flavors of nuun and they always seem to deliver.

If I had one small gripe about the nuun tablets it would be the length of time they take to dissolve. Most of the time it doesn’t really matter, but there have been a few times when I am feeling a bit dehuydrated (say, a recent 113 degree run), and since I don’t always have nuun in my water bottle when running, I want to toss in a tablet to assist. However, it takes some time for that tablet to make its way to full absorption. Ultimately, this is a first-world problem, but with the new nuun Instant, it cuts that small little issue out. Here’s nuun’s take on the matter:

Nuun Instant is different. It is designed to relieve dehydration after the symptoms of dehydration have become apparent. Whether dehydration is caused by busy days, long nights, illness or inhospitable climates, Nuun Instant’s formula uses established science as well as ingredient innovations to speed up the rehydration process on a cellular level. The result is that Nuun Instant hydrates the body approximately 2-3X faster than water alone.

One of the secrets to the speedy hydration of Nuun Instant lies in the origin story of its formula. Nuun Instant is based on Oral Rehydration Solution developed by the World Health Organization (WHO) to treat individuals experiencing illness because of dehydration. Over the years the exact WHO ORS formula has evolved, and Nuun Instant incorporates the latest in hydration science to inform the ratio of ingredients for optimal absorption.

The nuun Instant packets come in two flavors – Lemon Lime and Watermelon – and have everything you know and love about nuun – the electrolytes, vitamins (100% daily C and B12), and nutrients. They also taste great which is no surprise.

I think that these will be great for usage both when running and also off the trails or pavement. I absolutely have been someone who gets wrapped up in work projects and next thing I know I haven’t hydrated in far too long and am feeling rundown and sluggish. These would be a great option for a quick boost.

nuun, pronounced “noon,” was the first company to separate electrolyte replacement from carbohydrates. before nuun, if you wanted electrolytes, the result was a bottle full of sugar. with our simple, self-dissolving, low sugar electrolyte tab, we revolutionized the sports drink forever.

12 years later, nuun active hydration is the #1 selling sports drink tab in the cycling, running and outdoor specialty marketplaces. as education about hydration and wellness grows, nuun has become more accessible to a wider range of people. in response, nuun has expanded its product line from sports hydration to include other clean-ingredient products formulated for everyday hydration (nuun vitamins) and endurance hydration (nuun performance).

Be it a bike ride, a long day at the office, or a day at home juggling kids, nuun has a tablet and flavor customized to help you stay healthy and hydrated.

nuun and company is based in Seattle, WA. nuun is sold in over 5000 outlets in the u.s. and available in over 30 countries.

Thank you to nuun for providing us with sample packs. Please read our transparency page for info on how we do our reviews.