Açaí. Chances are you’ve heard of it, seen it in Whole Foods, read about it on a smoothie menu, and tasted it in a list of healthy ingredients. The açaí berry is the superior super-food, with antioxidants, omegas, fiber, and pretty much triple the good stuff that other super-foods can only dream of containing. However, Carioca Bowls is probably the only place around Portland that you can go where it’s treated like the whole food it should be, not as an added ingredient or a sprinkling of goodness on something else that’s loaded with sugar.

Carioca Bowls, Portland’s authentic açaí café, is a place where you can stop in for a healthy meal that will leave you feeling satisfied and full of energy. These are not merely snacks. These bowls are made with frozen açaí palm fruit and sustainably harvested in the Amazon. They are filling and delicious bowls of goodness. 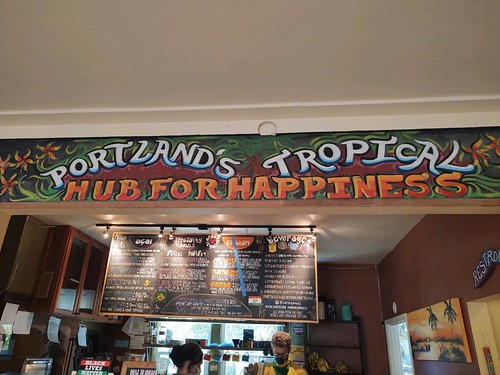 Carioca, which literally means “from Rio de Janeiro,” is a way of life in Brazil. The original Carioca Bowls location on NE Alberta opened in 2015 and co-owners Richard Matusow and Matthew Lau were inspired by their experiences working from Sambazon and wanted to raise the bar with açaí in Portland. There are now two Carioca Bowl locations for Portlanders to choose from, with the second location opening on NW 21st in Slabtown off 21st Avenue in October. I had the opportunity to sit down with co-owner Rich Matusow at the NE Alberta location which has a quirky relaxed vibe. I ordered a half sized original açaí carioca bowl, along with some of their tasty homemade Pão de Queijo, (a yummy Brazilian cheese bread that also has a vegan option,) and it was more than enough to keep me full until dinner and it was also refreshing on a hot day. 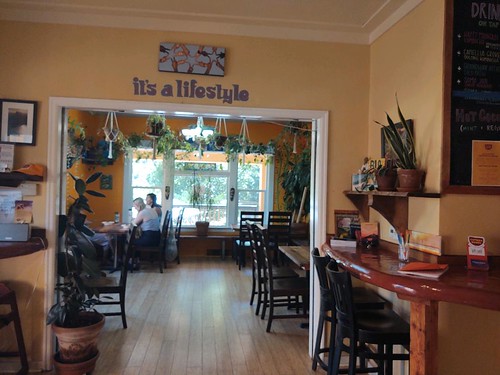 There are several things that are appealing about açaí. The first is that in addition to being very healthy overall, it’s naturally gluten and sugar-free. Carioca Bowls offers one raw açaí blend to customers that want it in the purest form, if that’s the blend you choose. The blend that I chose on my visit had some pure cane sugar added but it is still a very healthy option. It was also really good, like a dessert that doesn’t leave you feeling guilty afterwards. Additionally, the bowls will leave you satiated as well as full of energy rather than weighed down like some other foods would.

Lastly, and most importantly to me as a runner, the food at Carioca Bowl is absolutely MADE for athletes. If you’re a runner or a cyclist or involved in any sort of sport, you could take a break mid performance and have an açaí bowl and get back out there without digestive issues, not to mention the shot of energy you’ll get afterwards. Carioca Bowls has a protein bend that includes peanut butter and chia seeds, everything I’d crave to load up on after a long grueling run. And the NW location, so close to Forest Park, is a great go-to for that reward. 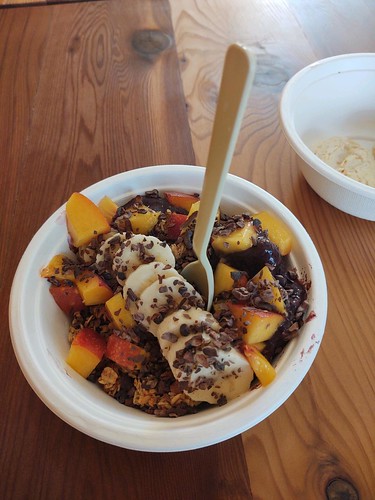 Each bowl has two size options, the half or the full bowl, and are topped with granola, bananas, and your choice of two toppings. There are always fresh seasonal fruits as an option, so I got some sweet and ripe peaches as well as some cacao nibs. Other choices, and there are many, include various berries and fruits, pumpkin seeds, maple syrup, peanut butter, or coconut. Nut butters, nuts, and seeds are also some add-on options. In addition to the raw blend (“Purista”) and the protein blend (“Ipanema,”) There are also several other options, including the Amazon Oatmeal which is your favorite açaí blend served over some warm gluten-free blueberry and chia seed oatmeal. The menu also boasts avocado toast, smoothies, teas, kombucha, and honestly so many options, it’s hard to go wrong.

Come and give Carioca Bowls a try and if you mention “Run Oregon,” you’ll be treated to 20% off your bowl or smoothie!