I love the spirit at the Oregon Brewery Running Series events. It’s laid back yet organized, and really, really supportive. Case in point: Before the run, organizer Nathan Freeman likes to ask for a show of hands. “Who’s running their first Oregon Brewery Run today? … Who is running their first 5k today?” and those with their hands still up get congratulations, well-wishes, and cheers from everyone else. Since times aren’t recorded, there’s no reason to get competitive. And because we’re all meeting back up for a beer, there’s every reason to be friendly!

On Saturday, May 11, I met up early with a friend who is doing a couch-to-5k program and completed 2 miles with her, then headed to Migration Brewing on NE Glisan at NE 28th. I arrived at 10:50, with the run set to start at 11a, but because participants at these runs are generally chill, I was able to get checked in, use the restroom, and be ready for the warm-up with time to spare. I even bumped into a new-ish running friend who is on our Pub Relay team for next weekend, an old Red Lizard buddy, and some ORRC cohorts.

We did a warm-up (some gentle stretching) and then we were off! My friend Lisette, who had already done the Doggie Dash 5k that morning with her mom, ran with me as we compared sandbagging abilities with each other to arrive at a fairly easy pace. Run Oregon Admin Matt Rasmussen was volunteering with his three amazing daughters at one turn, when we were still thinking “A 5k, no problem even though we’ve both already run today.”

The route wound through neighborhoods and followed the perimeter of Laurelhurst Park before turning onto a shaded path through the park. We did get stopped crossing Glisan, no big deal as this was an untimed run! 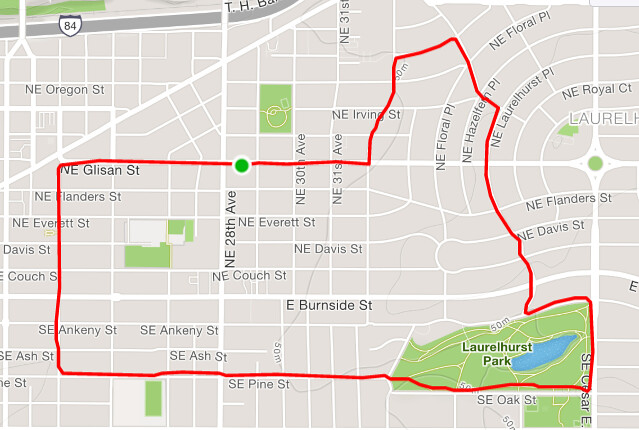 Running thorugh the shady park was wonderful, but it made the last mile (from about SE Pine and 29th) a slog in the sun. By then it was pretty toasty outside. Lisette and I purposely stopped at E. Burnside to let traffic get through because, honestly, we were about done. We also questioned the volunteer at the turn back onto NE Glisan who told us we were almost there … we do not think “close” means what she thinks it meant! But it could have just been the heat talking …

After the run, I guzzed a few refills of my water bottle before getting my beer token and goodies and trying to decide which of their brews I wanted to try. (The goodies this time included socks, mugs, bottle openers, so I got some socks for the husband. It’s part of my ploy to get him to throw out some old, gross socks he has.) Runners could also grab a loaf of Franz bread, or individual fruit pies, and get a Grilled Cheese Bite from the Franz Bread Truck.

I decided on the Straight Outta Portland IPA, and was very happy with my choice. I opted to wait to eat lunch until I got home (Mother’s Day weekend means my husband cooks whatever I want) but snagged a few fries from my friend Laura and they were amazing. Migration Brewing has a very cool space there on NE Glisan with ample indoor seating and a dog-friendly patio, so I’m hoping to get back there soon just to have more of those fries!

While I didn’t win anything in the raffle, Lisette won a 6-pack of Migration’s beer, and one lucky participant got a bottomless growler courtesy of local runner Tony Carpenter, who is also a realtor with Windermere. That’s the prize to get – when the growler is empty, you call Tony, and he pays for a refill for you. I gotta get me one of those!

There are more Oregon Brewery Running Series events all summer, including one this Saturday (the 18th) at Backwoods Brewing in NW Portland. Tickets to run are $30 and include your beer, a goody, and donations to their nonprofit partners, Oregon Brewshed Alliance and Dollar for Portland. 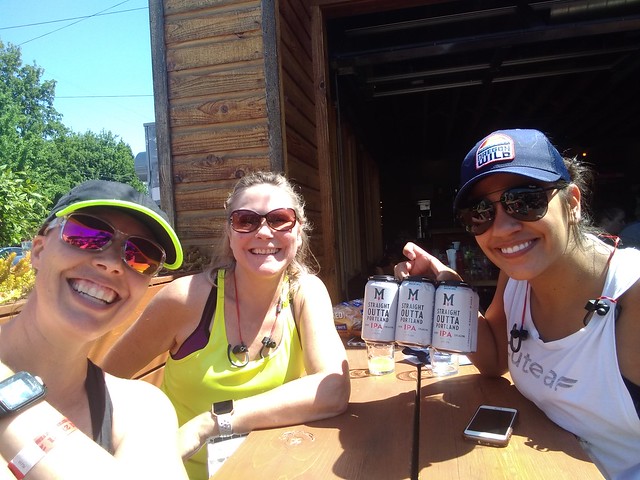 After the OBRS run at Migration Brewing, Lisette showing off the beer she won (I’m on the left).