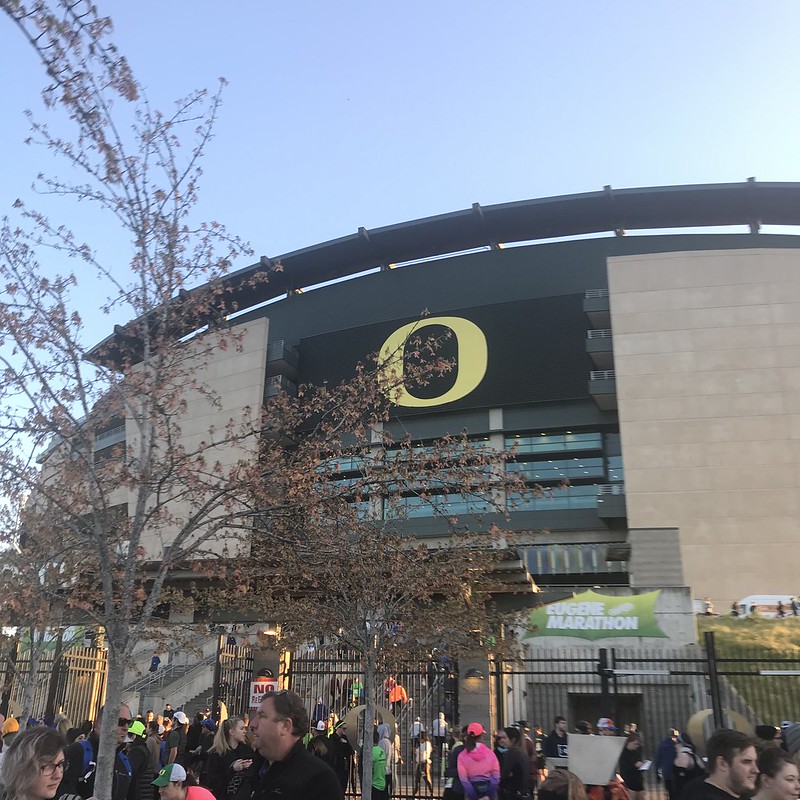 I mentioned in my recap of the Vernonia Half that it had been a while since I had participated in a half (10 months in fact). So after a successful (for me) showing at that event, I decided that I wanted to tackle the new Eugene Half Marathon. I have run the half once and the full once, with my last participation being in 2016. When I have a choice, I always try to run new races rather than ones I have done before, so I was actually kind of excited for a new-ish race course that the 2019 offered.

I know that many people were disheartened by the fact that the finish wasn’t on the famed Hayward Field track, but due to issues out of the race’s control (a GIANT renovation project), they put together a fantastic race nonetheless. In fact, it’s a pretty good consolation prize to be able to go from one famed finish line to another – the Autzen Stadium 50 yard line.

I both love and jokingly hate the 7a start time for this event. It’s great in the sense that temperatures are always quite cool and even after putting in a longer distance run, I can be home to help get the kids ready for church. But, it means I wake up way earlier than I would prefer (like 430am early) to get myself ready and make the drive south to Eugene. However that’s really a small price to pay and the early time is quite perfect in my estimation. 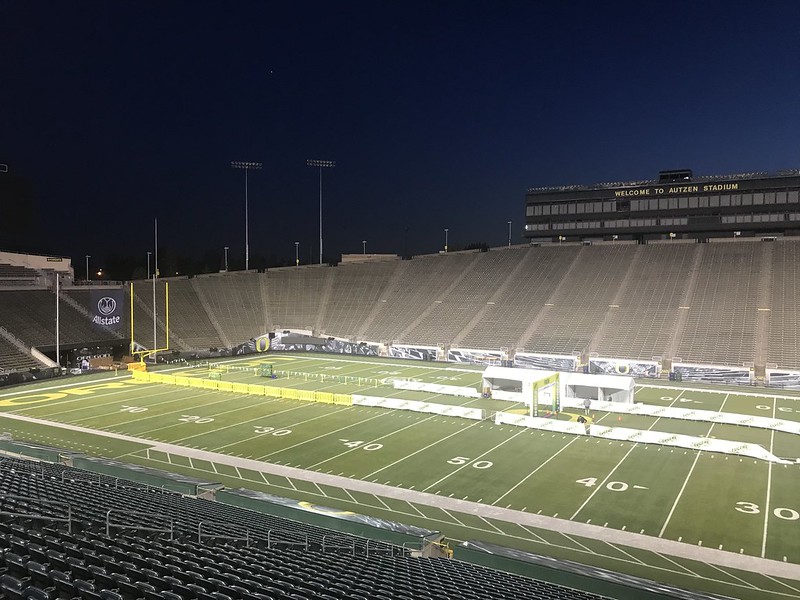 With the start and the finish at Autzen, there was tons of parking nearby. They provided shuttles from certain areas across the city, but parking was quite a cinch – which wasn’t always the case when the race was at Hayward. Picking up my bib was also easy, with it taking place in the spacious concourse of the stadium. This also allowed for a “real” bathroom experience, though there were more than enough port-a-potties to go around.

The weather that day was absolutely perfect. There wasn’t a cloud in the sky, but the temperatures at that hour were cool but not chilly. There was that same great Eugene energy as runners lined up in the corrals and readied for the miles ahead. Following the start, we quickly merged on MLK and ran over the Willamette River in a couple safe road lanes on Coburg Road. This was followed by some nice road running in downtown Eugene. It was quiet with only a few early morning coffee drinkers around, but it showcased the unique urban area of the city.

After some more city and suburban running, runners hit the U of O campus (which was short but still cool) and passed by the almost unrecognizable Hayward Field. I will admit that I did have memorable flashbacks in my head form the races of yesteryear, but also an excitement for a new Hayward finish when it’s all completed.

The out and back near the parks on Amazon Parkway/ Drive and Hilyard St was familiar (though historically, I remember it being ran in reverse). This section is always fun because you can see runners nearby on the other side of the park and cheer them on (or be cheered on), and maybe even be lucky enough to see the elite runners crushing it.

The final few miles navigated more suburban city streets. There were a few short hill climbs, during this section, but overall the course was super flat and easily navigable. And, as usual, the neighborhood support was bloody amazing – so many smiling and supportive faces and signs!

The final little bit was crossing back over the river on the Dave and Lynn Frohnmayer Bridge, quickly going through Alton Baker Park and making a 3/4 loop around the stadium to enter on the East side (a much longer distance than anticipated – especially when tired at the end of a race)! Then it was down the corridor and onto the playing surface with a #finishonthefifty. 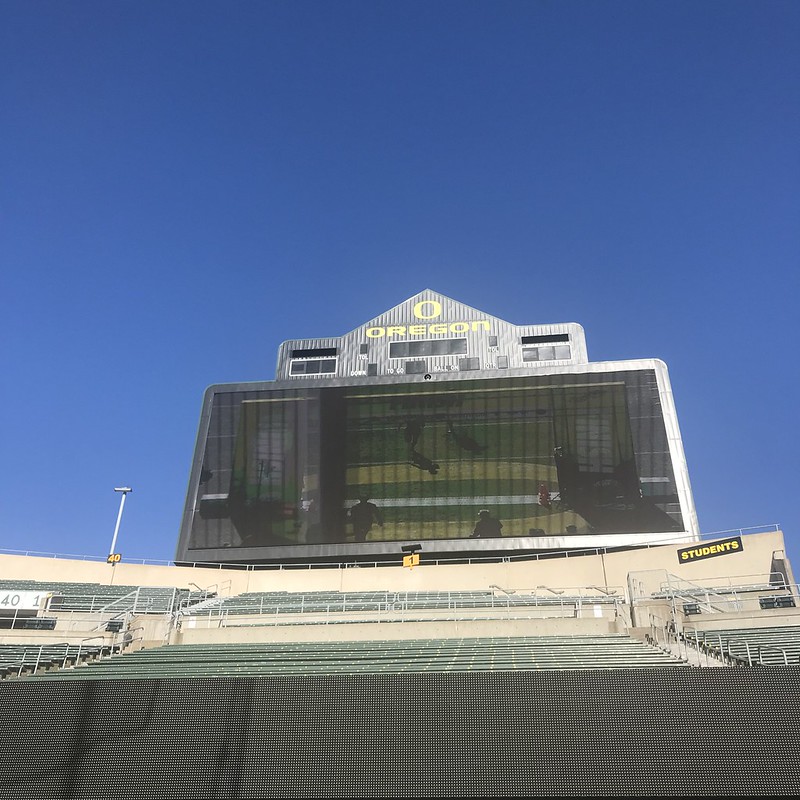 Our medals were handed out and were immediately offered a logo water bottle – actually filled with water! Then it was up the walkway and onto the post-race festivities in the stadium. It was such a beautiful and sunny day, that the concourse was mostly empty due to the stands being filled and watching all the finishers come in!

I absolutely loved this course and think it lived up to all the positive praise it receives and absolutely deserves. Can’t wait to come back and do this one again! 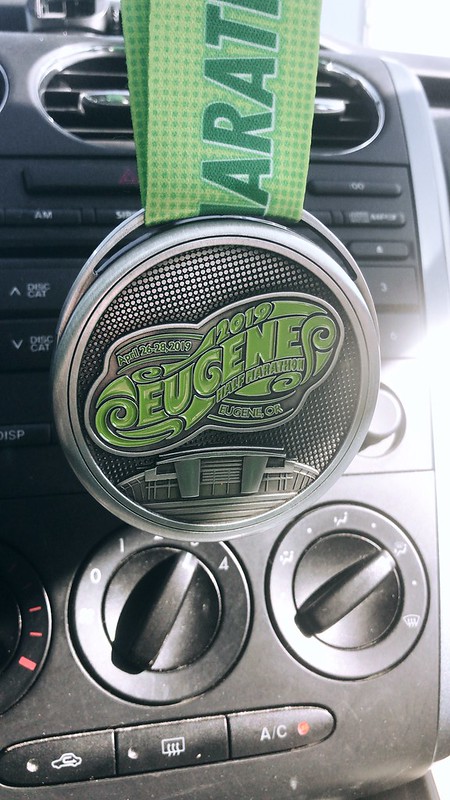