The Newberg Camellia 5k/10k run takes place every year on the morning of the Camellia Festival in April. This year’s event was on Saturday, April 13, and it was an overcast, but not yet rainy morning when 600 participants gathered at the Chehalem Cultural Center to check in for their races. Packet pickup had been available on prior days as well, but picking up my bib and shirt on the morning of the race was quick and easy. Along with packet pickup, there were several vendors inside the big event tent in front of the Cultural Center, including health and wellness vendors as well as food for sale as fundraisers for local nonprofit groups. Bag check was also available, but I didn’t need it this time. Inside the Cultural Center were bathrooms available for race participants, in addition to the row of porta potties outside.

Leading up to the 9am start time for the 10k, announcements were made to gather by the start line facing west. The 10k bibs were green while 5k bibs orange, which made it easy to know which race was starting, and the colors also matched the directional signs along the course. The 10k started promptly at 9am, and immediately after the start area was clear, the 5k participants lined up for their turn. We started about 5 minutes later, and the wide streets on the first half mile made it easy for the field to stretch out and everybody to have plenty of space.

The entirety of the 5k course was on paved streets or sidewalks. The corners and turns were staffed by volunteers and policemen, and course splits between the 5k and 10k were marked very well. Shortly after the 1 mile marker, the road started to slant up, and I thought I had reached the highest point of the course half a mile later, but somehow I had missed the fact that the first mile was a gentle downslope, and the second half did not include a downhill to the finish as I had anticipated. Lesson learned: Look at the elevation map beforehand! It was by no means a difficult course, and the neighborhood streets were great to run through. I crossed the finish line with a decent time, and was happy to have completed my first Newberg race.

After the finish, volunteers were handing out water bottles, and in the event tent a vendor had protein bars ready as well. I did not see any other foods for race participants, except for the variety of fundraisers offering food for purchase. I picked up my race results slip from the timing van and my potted camellia plant from the plant truck, and shortly after was on my way home again. Overall a nicely planned event!

You can see pictures of the event here and full results by Eclectic Edge are here. Next year’s run is on Saturday, April 18, 2020, and registration is already open. 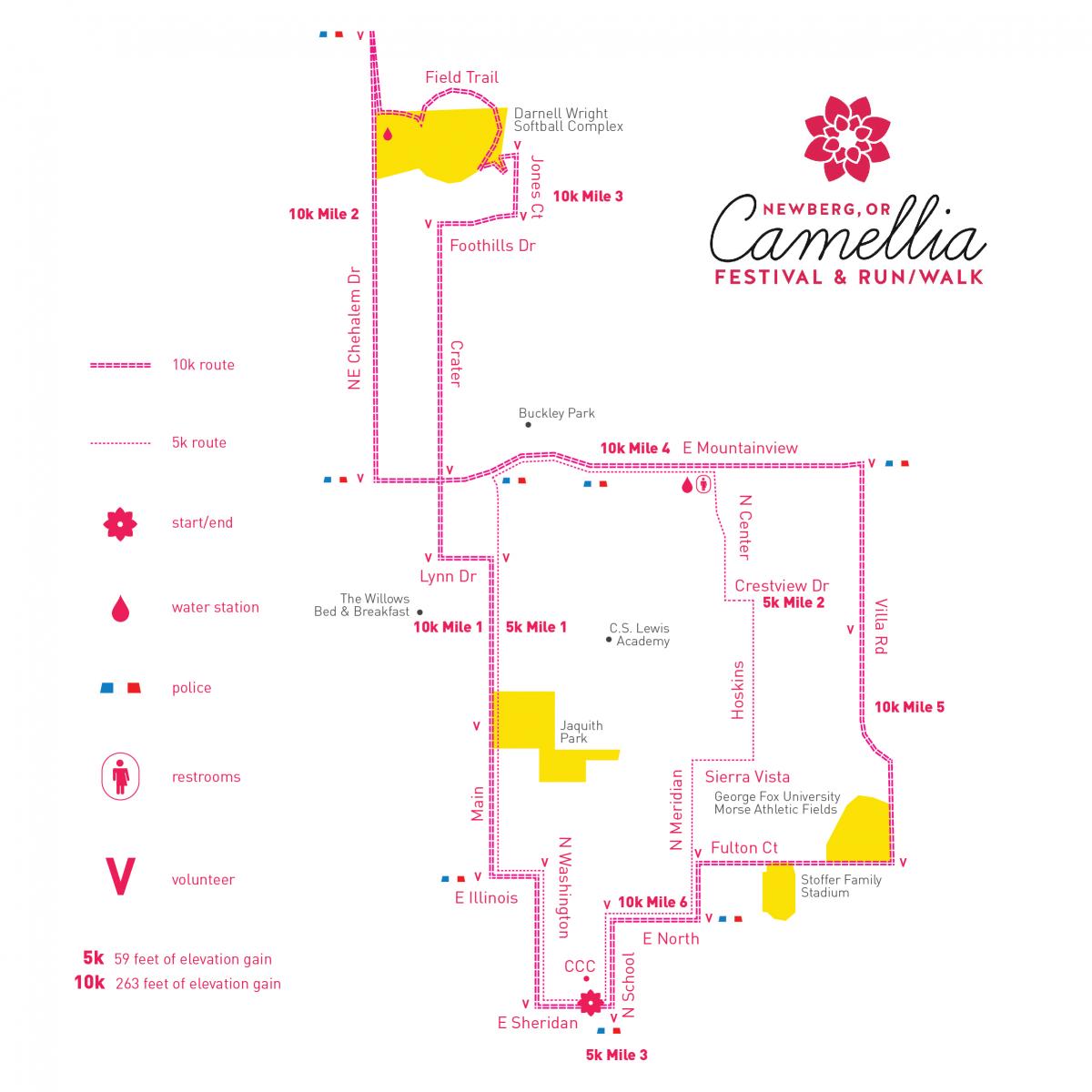