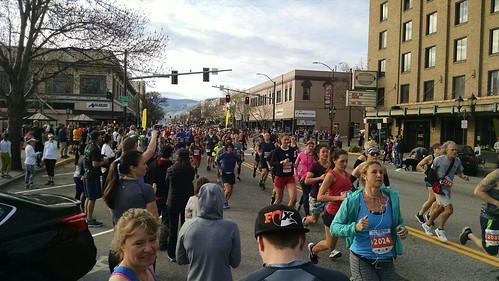 The start of the 2019 Wenatchee Half Marathon

The day after a 5 hour road trip with my husband to visit his parents in Wenatchee and a night of not-so-great sleep as we crowded into a smaller bed than we are used to, I wasn’t feeling as ready for the Wenatchee (Half) Marathon as I had hoped. As I waited for start time, I struggled to get my mind in the right place, which heightened my pre-race nerves. I got my music ready to go and stuck one headphone in so I wouldn’t drown out the atmosphere and conversations surrounding me. The start gun went off and the sea of people around me began to move. The first song that began playing was Beautiful People. As I looked at the many colors of running gear and the variety of people embarking on this 13.1 mile journey with me the lyrics seemed quite appropriate: “The only thing I see is beautiful people, beautiful people . . . ” Maybe it was the nerves, but suddenly I felt sort of emotional as I began running with all of the beautiful people.

The weather was perfect. Around 50 degrees at start time and slightly overcast. We made our way from downtown into a park along the Columbia River. As the sunshine broke out, the breeze kept the temperature comfortable. The scenery on this course is beautiful: trees starting to bud along the river, snow capped mountains in the distance, no traffic, and blue skies. This is why I love this race! I tried to settle in to my pace and enjoy my music and my surroundings and, surprisingly, time seem to go by quickly. In no time at all I had arrived at the epic climb up to the overpass. As I put one foot in front of the other, Stars by Marshmello was the soundtrack that powered me up and over the Columbia and to the more challenging portion of this course. 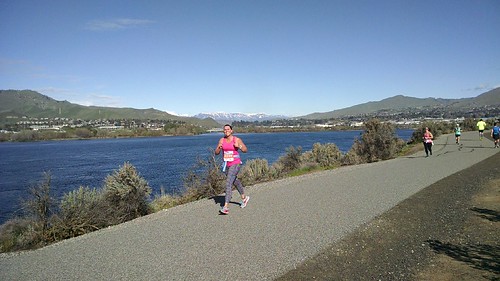 Running along the Columbia River at the Wenatchee Half

Once over the river, the landscape is less lush and more sagebrush, but with amazing views of the river and the snow capped mountains. This section is also rolling. My pace slowed with the constant up and down. I reached the turn around with Lost Kings reminding me to “Carry on, carry on, it’s a long marathon . . . “ Well, a long half marathon anyway! 😉 The return trip through the rollers was tough. My legs weren’t as fresh and I was longing for the flat side of the river again. Kygo and Selena Gomez asked me, “Who’s gonna walk you through the dark side of the morning? It ain’t me . . .” Thanks for your support, guys! Geez! At least I had the support of my husband and his parents along the way. They were great at popping up at various locations; taking photos and providing support. My husband had my stash of “just in case” items so I didn’t have to carry things, so that was a nice treat. That and Levels by the late Avicii did the trick and eventually I was back to the flatter, greener, shadier side of the river again. 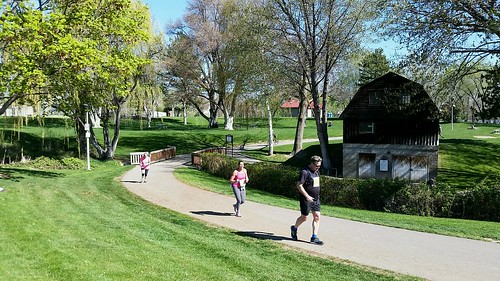 The flat felt great, but my hips were feeling the effects of the up and down. I caught up to a guy I had been leap frogging with and took a headphone out to chat for a short time. He was from Seattle and, like me, was enjoying the sunshine, but feeling the effects of running in warmer weather. A little while later I ran next to a different guy and chatted with him only to find out he also was from Seattle. I had a moment where I seriously wondered if I was losing my mind and was actually talking to the same person again. (After the race I did learn the two guys were friends from Seattle – What a relief! My mind appears to be intact.) 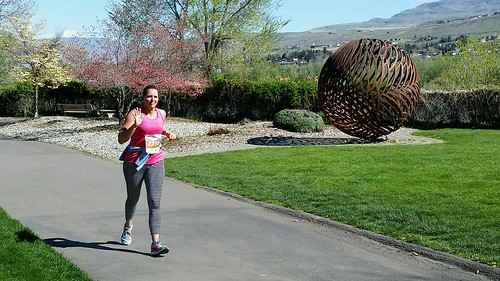 Almost to the finish line at the Wenatchee Half.

As I got into the last mile my legs were dragging. I knew I was close, but the finish felt so far away! That’s when Sofi Tucker confirmed my state of mind, “That’s it, that’s it, I’m crazy . . .” Yea, why else would I go all the way to Wenatchee, Washington to run 13.1 miles? Then Galantis and One Republic reinforced my pain as they sang, “I feel it in my bones . . .” Ouch! No kidding! Take me to the finish line, bones! And then I was at the pedestrian overpass I had been longing for that led to the finish. It seemed like a serious uphill climb – even though it’s not that steep – but the downhill to the finish felt amazing! Mission accomplished! I got my apple-shaped medal and even grabbed an apple from the snack table later. After all, when in the Apple Capital of the World, you’d better have an apple. Overall, it was a good run. Powered by my music, the sunshine, and beautiful surroundings – I got it done. So . . . looking forward to the Wenatchee Half again in the future. Yes, I will definitely be back!