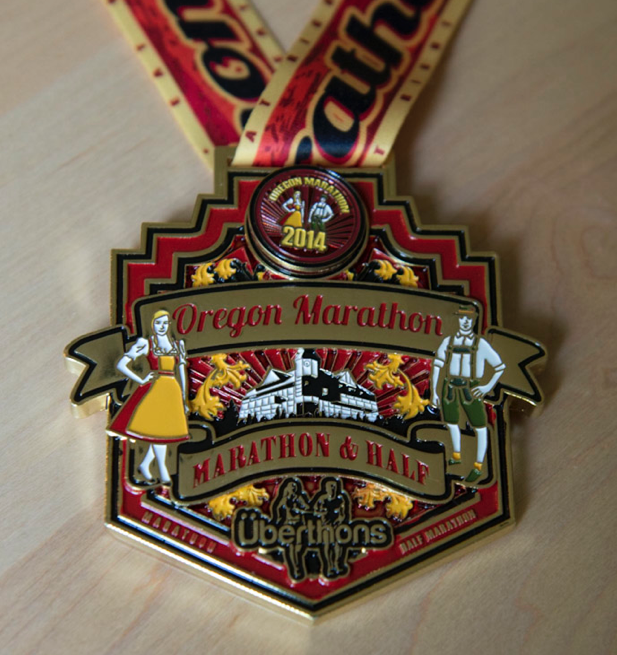 This was the second year of the Oregon Marathon put on by Überthons. I ran the Oregon Half Marathon last year which was held on the Banks Vernonia State Trail and finished in the town of Banks, but this year the race was moved to Mount Angel and held during the Oktoberfest. I had planned on going to this race just to cheer friends on and take photos for them, but decided to do the marathon at the last minute to see if I could improve my time since I had not met my goal from a previous marathon. After reading the course description on their website and seeing the forecast for a high of 88 degrees I was a little worried about what I could achieve. The course and the overall experience turned out very positive.

The bib pickup experience went fast for me. The race director told me there was a huge surge of people waiting to pick up their race packets when they opened. Überthons takes the extra effort to set up a scanner so racers can scan their bibs to validate that their information is correct. I was pleasantly surprised by the enjoyable live music that Überthons provided. Mark Seymour and Rex Baker (Bass) of Early Winds Music created a nice atmosphere for everyone.

Knowing how wonderfully energetic I feel after running marathons, I decided to park near the finish line. I then did a warm up jog to the finish line a half mile away. I arrived to the start line that had plenty of restrooms, a large facility where runners could stay warm from the surprisingly brisk morning and some great music playing over the loud speakers. I also noticed after the race they had plenty of parking near the start if I had chosen to park there and they had a shuttle going between the start and finish for those who needed it.

As the race time for the marathoners grew near, the race directors started advising runners to start lining up. At first, I was a little confused because they had the half marathoners lining up ahead of the marathoners, but it turned out that Überthons had set it so the start of the half marathon portion of the event would start a tenth of mile ahead. So they lined up the half runners first so they were set and ready to become the cheering squad for the full marathoners. I have to admit it was such a nice feeling to run past all the cheering half marathoners which added a positive energy to the start of the race. It was a great idea that as a nervous runner I appreciated.

The Course for the full marathon:

After the positive send off by the half marathoners we ran out of the town up a constant but gradual hill in the first mile past the Mount Angel Abbey. Once we passed the Abbey it would be a nice gradual down hill with rollers until mile 11 when the race would start climbing again. The subtle rolling hills helped me by using different muscle groups in my legs. The sun came up in full view and temperatures started to rise over the duration of the race, but there were some sections with decent shade in the first 13 miles. The marathon was very picturesque with farmlands, the Abbey visible at several points from afar and a historic wooden bridge between miles 7 and 8. I saw Darwin, one of the Überthon race directors, in traditional German attire cheering runners on just past mile 6. Because of the net level down hill from miles 2-11, my  miles flew by. In fact, I was worried I was running too fast, but I kept the momentum going. Considering the unseasonably warm day, it was great to see the medical team clearly posted along the course and at the finish helping runners deal with the typical race ailments.

Ken Rice coming into the finish with a personal record.

At mile 11 the gradual climb started again and would continue all the way to mile 19, but while I slowed down with the increase in elevation, I was able to maintain. Passing the half point at 13.1, the course changed to open farmlands. There were three gravel country roads in the second half of the race as follows 13.29 to 14.59, 18.54 to 19.33 and 23.87 to 24.85 for a total of 3.07 miles according to my Garmin data and what the race director had posted on the site prior to the race. While I am not a fan of gravel roads, I felt these country roads were compacted enough to have only a slight impact on my speed and the race director warned about them so I mentally was ready. I took a walk break at miles 15, 19 and 25 to take in water and give my legs a breather as the day continued to get warmer. From mile 20 and on it was a net elevation decline with three noticeable, but not difficult rolling hills in the last mile and half. At mile 24 I got passed by an older runner who looked like he was out for a short jog, but I found out later that he ran a sub-three hour marathon. I felt strong most of the race, I did have some difficulties keeping the pace up at mile 24.5, but managed to get motivated again and pushed it into the finish. The course was well marked and volunteer guided allowing me to run the race without any confusion or issues.

If you would like an interactive map of the course, here is my Garmin data from the full Oregon Marathon. Below is the official race map by Überthons.

Runners who ran the half marathon dressed for Oktoberfest

The finish line had plenty of water and refreshments along with a place to rinse off as well as a large covered bleacher stands so spectators could take respite in the shade. Überthons also coordinated with the YMCA in Silverton to allow participants to shower and use the pool, which a number of my friends running the race took advantage of. I heard later on in day that there were some issues at a couple of the last aid stations with not having enough fluids. I saw an Überthon volunteer running a handtruck of water bottles and mentioned they were on the way to restock them. I have run a lot of races with Überthons and know that they strive to provide the best experience possible and I have no doubt they will ensure that aid stations will be fully stocked at future events.

A big plus to this race was that each participant got free and generous food vouchers for the Mount Angel Oktoberfest, which my friends and I took full advantage. The later part of the day was hot, so we retreated to the covered area where the race had started and ate a selection of foods from many of the vendors and beer distributors.

Oregon half and full marathoners enjoying post race food and drinks. All photos in this article taken by Michael Allen

Results from the 2014 Oregon Marathon, use the drop-down menu to select the results for the “Full” marathon.

The Oregon Marathon was a great experience for me and it allowed me to improve my marathon time for the year. Marathons take a lot of energy and coordination to prepare and setup , but it gets easier as you repeat the process year after year. However, Überthons is taking a bold step in hosting the race on a rotating basis to feature some of the great cities in Oregon. I applaud them for that kind of courage and energy they are committing. They will be hosting the Oregon Marathon in Mount Angel for 2015, so I would recommend putting this event on your list of 2015 races to consider as it will most likely be the last year before it is moved to a new location. This current course is a beautiful, challenging, and a great post race experience both at the finish line and at the Oktoberfest.  I’d run this race again and you should consider running it.

In addition to my review of the full Oregon Marathon, Tung Yin, a fellow Run Oregon Blogger did a recap on his 2014 Oregon Half Marathon experience. All photos taken by me or a friend with my camera.