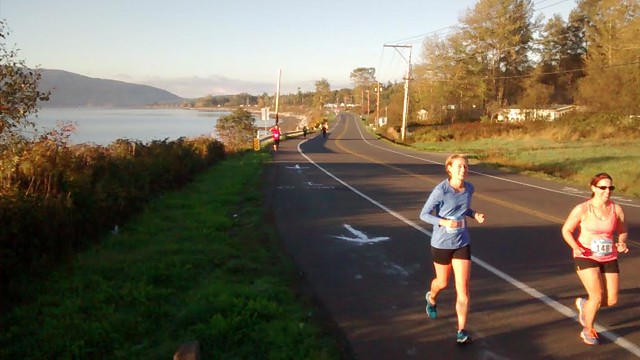 This recap was submitted by Run Oregon reader Sarah Willams. Feel free to Submit a Guest Post in the “Contact Us” tab if you are wanting to write a preview or recap your running experiences as well! My family and I headed to the race expo on Saturday, a tiny little thing, held in a portion of a banquet room at the Lakeside Inn. There were friendly volunteers passing out race bibs, water bottles, and shirts, and computer stations were available for last-minute registrations. There were a few vendors and some of the pacers were there to chat and pass out pacing wristbands. Alas, there were no free samples, so we made a quick, in-and-out stop, then headed to our hotel to relax for the rest of the day. Sunday morning was clear and cool before the 7:30 marathon start on the Lummi Reservation on the west side of the bay. We drove to the start (instead of using the shuttle from the finish), where there was plenty of parking and plenty of volunteers to direct traffic. The Wex’liem Community Building was open for runners to wait inside where it was warm, and there was a small opening ceremony with members of the Lummi Nation singing a traditional welcoming song in their native language. There were some indoor restrooms as well as a line of porta potties, which seemed sufficient for the number of runners. The start was pretty laid-back, with fewer than 500 marathoners mingling with their families and friends, and six pacers for finish times between 3:15 and 4:15. But we started on time, and even though I lined up at the back, it only took me maybe 30 seconds to cross the timing mat.

The course was well-marked throughout, with enthusiastic volunteers stationed at anyplace that a runner might even consider taking a turn. Mile markers were very visible and were color coded to distinguish between the full and half marathon. Aid stations were about every two miles from start to finish, and each one was staffed with a few adults, at least 10 kids in matching blue soccer warm-ups, and plenty of supplies. I am a middle/back-of-the-pack runner, and in this small race, I was definitely close to the back of the pack and on my own most of the time. I was the only runner around as I went through each aid station, and I kind of felt like a celebrity because everyone was cheering just for me and I was offered 10 cups of water/electrolytes or various flavors of gels.

The first eight or nine miles were run through the Lummi Reservation, with the first five right alongside the bay. Those miles, as the sun was rising over the water, were especially quiet and peaceful, with some beautiful views. Miles nine through 15 were along quiet, rural roads. I was disappointed about two things along this portion of the course. My GPS watch was right on for the first nine mile markers, but mile 10 showed up almost .2 miles after I expected it. I didn’t make any detours or have to do any weaving back and forth that might have added distance, so I don’t know what happened, and just resigned myself to running a 26.4 mile marathon. The other issue is that the timing mat for the half marathon split was between miles 12 and 13, not at 13.1. Miles 15 to 22 went through residential neighborhoods, a park, and an industrial area. The roads were open, but there was very little traffic and city workers were there to stop traffic so that I never had to stop and wait. Around mile 22 I reached the downtown and encountered some spectators for a few blocks.  Then the course turned and ran along a hard-packed trail along the bay that is clearly popular for running and walking.  It was a beautiful day and there were a lot of people out enjoying a stroll on the trail, with only a few volunteers and mile markers (no aid stations) to indicate that it was a race course. Again, I was running by myself, so it wasn’t difficult to navigate around the non-racers, but if the field of back-of-the-pack runners increases, it could easily become an issue.

At the end of the trail was a steep wooden boardwalk that led from the waterfront up to street level. The elevation map clearly shows that steep uphill, so I shouldn’t have been surprised, but I was definitely not happy to see it at mile 24! The last two miles were along a street back into downtown, and I have to admit that I don’t remember much because I was concentrating on finishing under my goal time. I do remember that spectators appeared again along the finish chute, that I was surprised to hear my name announced as I finished, and that I squeaked in just under my goal time.

There were plenty of carbs and water available in the finish area, but after hours of Gatorade and gels, I would have loved something with protein.  It’s possible that these things were available earlier but they just ran out for the back-of-the-pack.  The finish area had live music, food carts, and plenty of sunshine, but after a bit of stretching, I headed back to the hotel for some food and a shower.

Overall, I thought the Bellingham Bay Marathon was a well-organized, smaller race. It was a quiet solo run, so if you like or need a crowd for motivation, be sure to bring your own or run with a buddy. The volunteers were great and the course was well supported from start to finish. The course offered a variety of scenery, from water views to rural to residential and even a bit of downtown, but the downtown waterfront portion might need some tweaks if the race grows over the years. Finally (but importantly), the art on the finisher shirt and medal are awesome. Thanks to everyone who made this a great day!