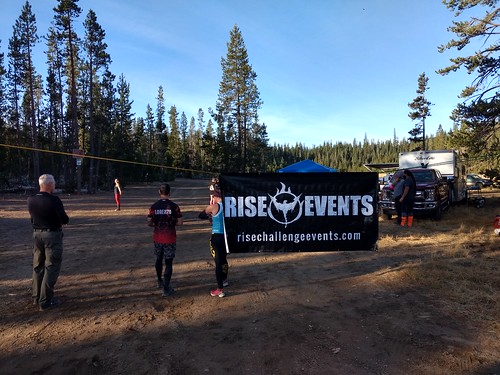 A small group of racers prepares to start the Long Course at RISE Troops Challenge 2020.

Arriving early to check in on race morning felt like getting back to “the good ol’ days.” I arrived a bit earlier than necessary, so I saw a few of the groups setting off to begin the Long Course. I was registered for the Short Course, so I had time to meander and get warmed up. The RISE Troops Challenge is a military-themed obstacle challenge that was held at Wanoga Snow Park. The elevation here: 5500 feet. Oh boy!

There was a short pre-race briefing, where the RD gave us some information we would need to know before running the 3+ mile course, and then groups of 5 were called to the start line at their designated time to begin the challenge. Even though the race was well-organized, it had a casual, comfortable feel to it. The start-line volunteer would shout out the names of the 5 people that should be at the starting line. I stayed within shouting distance so I didn’t miss my cue. When it was my time at the start line I suddenly felt a wave of nervousness. I realized it had been quite awhile since I had felt those pre-race nerves. A familiar feeling that I embraced. Yea, I have really missed this! 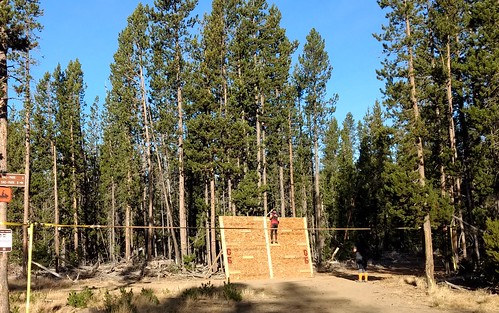 A Long Course racer makes his way across the wall.

“Ready! Set! Go!” And we were off. Two of the people in my group of 5 sprinted off, I started out slow, knowing that elevation was going to be a factor. As we rounded the first turn and began an uphill climb, elevation hit me fast! The other 2 people in my group, appeared to succumb, and began walking. I tried to power up until my lungs were burning. Then I took a brief “hike” break to power up the rest of the hill. I was hating the fact that I walked a bit, but I knew I had to get on top of my breathing or the rest of the race wouldn’t go well. I ran through the forest with no one else in sight. At the first obstacle I caught up with another racer. He was busy catching his breath and told me to go first on the grenade toss. I missed the circle on the ground by less than an inch and got the first mark (AKA penalty) on my race band. (Dang it!) I made my way down the forest road to the ammo carry and press, a tire flip, and some hurdles. At one point I felt like I had been running alone forever. When I heard footsteps coming up behind me it was almost a welcome relief. I mean, at least I knew I was going the right way!

The sandbag hill climb was a challenge that slowed people down a bit. It was at this obstacle that I began to actually see other racers again. Farther along there was a calisthenics stop where push-ups, sit-ups, and flutter kicks had to be done. I could see the start/finish area and I was thinking . . . “Am I really almost done already?” Then there were some walls and a target shoot. The airsoft gun was not highly accurate, nor was I, and I got the 2nd mark on my wrist band. Right before the finish was a “gauntlet” with cones every so many feet. At each cone, a burpee was required. Each mark (penalty) on your wrist band meant an additional time through this gauntlet. So, instead of just one time through, I had 3 rounds total to complete. Oh, burpees, how I love to hate you! I finished my 3 rounds and then wasn’t exactly sure where the finish line was. I ran towards a volunteer who was holding a clipboard and she directed me a few more feet – back to the start line – where I told the finish line volunteer my race number and was checked in as finished.

My finish line thoughts were: That was fun! I can’t believe I’m done already. How long did that take me? I really should have done the long course. (Next year for sure!) I got my dog tag, caught my breath, and congratulated a few other finishers. I passed on the free beer and headed out not long after finishing. It felt a little anti-climatic as there was not an after-party and I hadn’t raced with anyone I knew to celebrate with afterwards, but I left feeling so good about being able to do a real live OCR (obstacle course race) – something I hadn’t done since February. I plan to be back again. Long Course next time, of course! 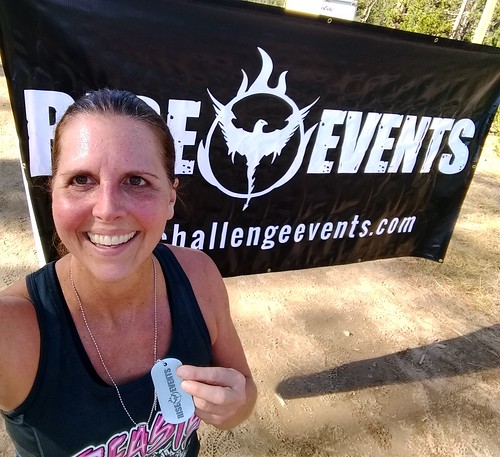 I earned my dog tag after a fun time on the course at RISE Troops Challenge 2020.

I have missed the pre-race nerves, the feeling of being a part of something challenging with other athletes, and just getting out and doing what I love and not being the only one out there doing it. While the number of participants was small, the one thing I heard from about everyone I spoke to was: “Finally! It has been so long since I’ve done this!” A huge thanks to race director Tammy (RISE Challenge Events) for figuring out how to make it happen and doing a stellar job. We truly needed this! When’s the next one?