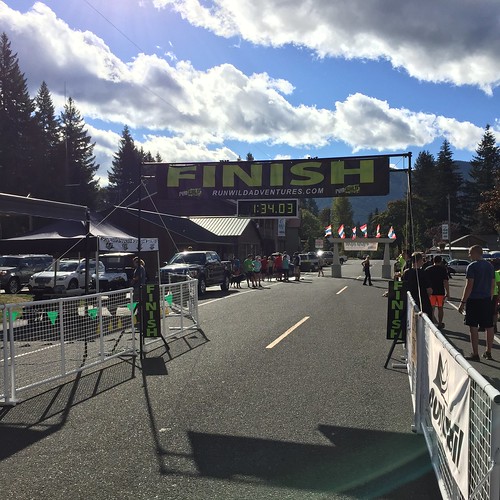 Even though the numbers were up overall, the drought and wildfires that plagued Oregon during the summer did make an impact. The number of people camping at Detroit Lake dropped by 26 percent — a loss of almost 20,000 overnight visits — due to very low water. —Zach Urness at Statesman Journal The uncertainty of water levels in Detroit Lake...have limited seasonal tourism[.] In a low water year, the UNSC (Upper North Santiam Canyon) would lose 2.4 percent of its total output, 3.3 percent of its value-added output, and 4.7 percent of its employment. —Economic Impact Study for Detroit Lake and the Upper North Santiam Canyon

Anyone who has driven to Bend through Salem has undoubtedly witnessed the extremely low water levels, stumps, and the vibrant Detroit Lake being a shell of its self. The low water levels may have been due to some normal draining, but it's sad to see how low it has been all year. But on to happier things! Proceeds from the 2015 Detroit Lake Mud Run benefitted the Detroit Lake local community. I was interested to see what Run Wild Adventures had in store for their 201/2015 running season kickoff event, and even low water levels could do little to destroy the feel of the event.

Over 200 runners took over the main street in Detroit on a pleasant and clear morning. I ran this event a few years back and had vivid memories of it being a murky post-apolocolyptic wasteland. This year, low 60’s temperatures and blue skies were evident. Race director, Gary Terlecki, had obviously been putting in solid work creating something out of what could have been nothing. And he pulled it off.

The first 3/4 mile was a straight and slow descent on paved roads to get to the lake. Following a short trail section, we entered our first little venture onto the lake bed. This was, unfortunately a bone dry section in what was once covered by tons of water. It was over a mile before we got our first real taste of a technical challenge. Gary had warned about needing to create an entirely new course, and for runners to be prepared to cross the Breitenbush River “about a half-dozen times”.

The trail gave way to big rocks and we entered the river for our first in a series of switchbacks. The water was cold, but the footing was surprisingly sturdy (or I just became more coordinated since the last time I went wading through water). Over the next mile or so, we crossed over and back 9 times (by my count, though a running partner of mine counted 7 – we were both too tired to think straight). The outer banks of the river were a combination of large stones and some sections of dirt and sand. Regardless of the terrain, my steps were slow and deliberate and I’m sure everyone’s pace suffered as a result. No sense spraining an ankle 1/3 of the way through a tough race.

At mile 3, there was a pretty solid vertical climb. It was short, but with waterlogged shoes, it felt worse than it should have. We then took to some roughly maintained trails (I hope that there was no hidden poison oak), for a bit. A short pit stop at the aid station was in order before a steep decline down to the lakeshore. This was one of the areas that had actual standing water and muddy banks. The course flags had us steered mere feet from the shore, though footprints showed a pretty even split between those in the trenches and those who opted for a dryer traverse a few more feet away from the water. I said “the heck with it” and took on the mud in full glory.

Within two steps both legs were knee-deep. As I tried to pull up my right leg, my shoe briefly came off, as the suction now had me stranded. So this is what quicksand feels like. People started passing me as I struggled to free myself. I managed to do so inch, by painstaking inch. A few more calf deep mud plunges and I then opted for higher ground. Unfortunately, even though the mud section was relatively brief, the strains of freeing myself left me zapped of energy. The final few miles were more a test of will than anything. While the terrain eventually became less and less muddy, I trudged along with a smile on my face, and mud in my shoes. The last section was that initial paved trail back to the start.

Following the race, there was beer from Seven Brides Brewing, Great Harvest Break, and three different soups to choose from. I immediately perked up with a little food in my belly and took in the rest of the morning with my fellow dirty runners.

The success of the 2015 event was testament to the work and drive that Run Wild Adventures has in the local running world. Given the sheer size and lack of trails on large portions of the event, the course markings were incredible. I had ZERO issues with figuring out which way to go. They worked hard to create a memorable experience, and did so my changing up their course, making it a challenge, and utilizing what they had at their disposal. Full results can be found here.