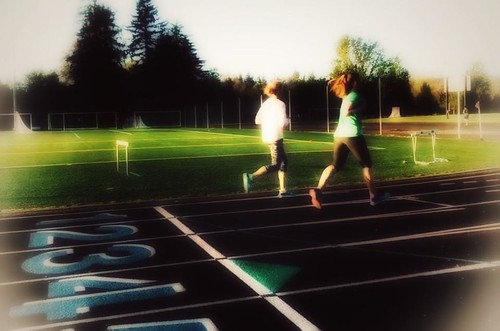 When I worked at a chiropractic clinic as a stretch therapist, I saw all sorts of athletes come through the office. Every one of them was amazing in their own way, from the dancers who were endlessly flexible to the football players who’d broken several bones many times over. I, of course, related most to the runners with their stiff hips and tight hamstrings, and I understood the level of crazy some were willing to summit. I never really thought much of it until I had a great conversation with one of the massage therapists about how runners are different from every other type of athlete.

What makes a runner different than another athlete? Firstly, to this massage therapist who saw much more than I ever did at that clinic, runners all seem to have one thing in common, and that’s a high tolerance for pain. If you really think about it, it makes perfect sense. I can’t think of many other sports where the athlete is, at the VERY LEAST, in a constant state of uncomfortableness. Even when it’s flat as a pancake on the road you’re on, even if you’re trying distract yourself with the pretty views or the conversation of your runner friends, you are feeling it. Even at it’s best, you’re working and you’re sweating, and you can feel it in your lungs and your legs. At it’s worst, there’s a steady burn of numbingly horrible pain, and if you don’t have a gift for handling that, you probably wouldn’t keep doing that to yourself day in and day out. I remember a comedian once saying he never understood why anyone would want to be a runner because they never EVER looked happy when you see them out there running on the side of the road.

It’s true that even when you love running, you kind of hate it. That you dread every run as much as you look forward to it. Even if you train really hard and it gets a little easier for you, some days will still always be harder than others. What’s both frustrating and exhilarating about that is that sometimes there’s no rhyme or reason as to why. Because despite how good you get, there will still always be pain, there will always still be good days and bad days, and you won’t know when to expect what. And it makes you appreciate the good days so much more.

The second thing that all runners and only some other athletes have is what I’ve always called “stubbornness.” My husband refers to it as “dedication,” and says it’s the quality in me that he admires the most. Not long after we got married, I woke up before a race and it was raining in sheets outside. He quite innocently asked me if the race would be canceled and I laughed out loud. He drove me to the start and was dumbfounded by the sea of runners, standing in the rivers of rain, waiting to do the race. If I’ve said I’m doing a race, I’m doing it unless my legs fall off before then. Others call it “craziness” or “insanity,” or even “pointless.” My co-worker didn’t say runners had any of these qualities. He called what runners had “pure grit.”  If you’re a runner, it honestly doesn’t just come down to how fast you are or how many miles you put in. It has everything to do with the fact that you just .. Get. It. Done. No matter what. Rain, snow, heat, bad air quality, pandemic. It’s all the same for a runner. You might choose a treadmill (a whole different kind of badass grit that I could write a whole different blog entry about) or running around your block 40 times, or the nastiest hill ever. It might be ugly, but there’s no question it’s going to happen.

I’ve run through a thunderstorm or two, golf-ball sized hail, and ice (thank god for my YakTrax) not to mention all those 5:00AM (and earlier!) runs with my ladies at least one day a week. I might have gotten 3 hours of sleep last night, been up with a sick kid or at a holiday party, or just had a lot of “life” getting in the way, but I will STILL Get. It. Done. The same thing inside of myself that forced me to go to a cycling class a few hours after a root canal is the same force that made me a good candidate for being crowned a runner. I once ran 16 miles and then went to my apartment and spent the rest of the day moving into a new place after a breakup. You have to do these things to still have a life AND be a runner. No excuses. Ever. We don’t even think about it, we just lace up and go.

To be fair, that’s not everyone, and I know plenty of fair weather runners too. But in my opinion, which may not be a popular one, most “hardcore” runners get that because that’s what they do too. It’s not so unusual .. Unless you’re not a runner. Runners are passionate about their sport. More than wanting to run, they simply feel compelled to. There is no off-season for many. My husband mistakenly thought after I trained for my first marathon, that he’d get me back on weekends. But there’s always another run. And even if you don’t do races or have anything to train for, you still run.

Running comes easy for some, and even some more recreational runners are annoyingly good at it. But there are others, like me, who really work for it every single time. Gaining speed and stamina on a track, on the road, or out on the trails and giving up your personal life to train for hours at a time doesn’t come easily for some of us. Never being able to wear knee high boots that fit your enormous calves ever again is something we sometimes have to sacrifice. Runner’s chafe means strategically placed “real clothes” and black toe nails mean close-toed shoes. Because we work so hard, we are invested, 100%. I’m not as genetically gifted as some. I know for a fact that I work twice as hard out there as some runners do, both recreational and hardcore types. But sometimes it separates the runners from the other athletes because we have to stick it out a lot longer than many of them do. And if we miss two weeks of running, we feel it. We lose those miles fast, so starting over again and again is something that takes grit also.

We don’t have a winner at the end of a game. The game is ongoing. And we lose a lot. Like A REALLY LOT for some of us. We know there are thousands of people crossing the finish line, and we aren’t the one breaking the tape unless we are phenomenal elites. But we persevere and we keep going, and even though we don’t win, the finish line always feels good. We can feel every inch of that race on our legs, our lungs, and our hearts when we stop. Even in last place, it’s an accomplishment. It’s about getting through it, not about getting the trophy or the cheers of the crowd (though we sure love our cheerleaders on the sidelines!) And the struggle is what makes the work to get to the end that much sweeter.

It’s the passion, the grit, and the tolerance for pain that keep us going day in and day out. It takes time and patience and perseverance to keep going, to run through shin splints, plantar fasciitis, knee and hip pain. We push ourselves to the edge even when it hurts, even when it could be dangerous. I’m not saying it’s always wise, but it’s what we do. We give up weekends and late nights for training and races. We literally stumble and fall and get back up bleeding and we keep going. There may be blood and sweat and even some vomit, but I have to finish before I give any attention to it. I’m sure there are other people that feel as much love for basketball or football or soccer as runners do about running, but I haven’t yet met anyone that commits like that. It doesn’t mean they aren’t out there. I just haven’t found them yet. Maybe because I’m out for a run.  I miss a lot.