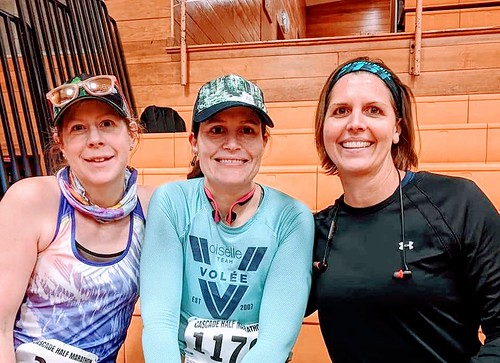 Doing a race in January in Oregon is like playing the lottery. Sometimes you win, but you usually lose. The Cascade Half Marathon has been known to have some awful weather. Sometimes there’s wind. Somethings there’s rain. Sometimes there’s both. Sometimes, there’s even ice. It’s cold. And it’s off thieving  beaten path in a little town with a population of about 2000 people called Turner, OR. This year, I won the lottery when I decided on this race because the weather was perfect. It was foggy but gorgeous and chilly but unseasonably warm for winter in Oregon. It was dry and thankfully not slick anywhere.

I decided I wanted to do the 2020 Cascade Half Marathon because I’d never done it before and I wanted to try a race in a new location. Living in Portland, I was sick of the usual lineup. The promise in the race description of flat country roads and soup and cookies afterwards sucked me in.

I had an uneventful drive to Turner and parking at the start at Cascade High School took about 5 minutes. This was a nice change from some of the bigger races where the vehicle traffic can be a nightmare. Packet pickup was in the gym, where many people were hanging out on the bleachers and connecting with friends. The lines were not long and everything, again, went quickly. I chatted with fellow bloggers Julie and Annette and some other friends getting ready for the 10k. I ran into Paula Harkin (Run With Paula Events) who was using the half marathon as a training run for her Tokyo Marathon in March. It was not overwhelmingly crowded and everyone seemed excited to get out there.  More and more, I prefer smaller races to the big ones for reasons such as these .. The more personal connection is really nice, especially if you’ve got race day nerves. 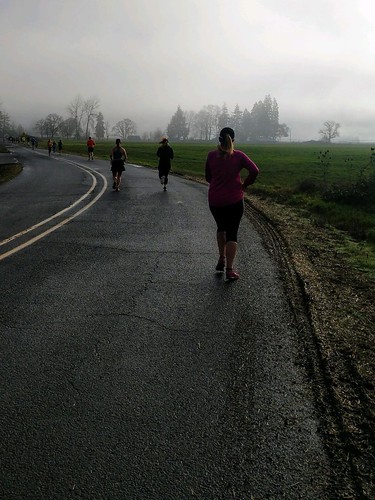 The serene course was good for the soul

Though I’ve run many races over the years and countless half marathons, I was nervous for this one. After an exhausting couple of years of races, my body has been slowing down in protest. Add this to a nasty winter break sickness and a new healthy eating challenge for January that’s been leaving me more tired than usual, and it’s really no wonder I’ve been feeling depleted of energy and motivation to run my hardest.

There was an early start option for Half Marathoners expecting to take longer than 2 ½ hours at 8:00AM, and the rest of the Half Marathon participants were set to take off at 9:00AM. The 10k and 2 Miler took off at 9:15AM. It was nice having everything spaced out so that it was never too crowded around you. Our race started exactly on time and there were no elbows in my ribs or people tripping over the backs of my ankles. I was able to fully take in the scenery and enjoy the race at whatever pace I wanted to run.

The course was pancake flat, just as described. I was grateful for that, and it made it easier to concentrate on other things. For the first portion of the race, it was foggy and beautiful. The roads were quiet other than a rogue  rooster call. We passed farmland houses and barns, as well as horses and cows enjoying the spectacle of runners invading their usual peace. Some sections of road were filled with overwhelming scents of manure, but it was great motivation to keep moving in order to get to the better smells of the fresh country air. The roads were stick straight for stretches with 90 degree turns here and there, and you could often see all the runners on the route ahead.

I felt pretty good until about mile 8, when I started to feel like it was hard to breathe. I walked a bit here and there from there, but I never lost sight of my goal, which was to finish the race feeling healthy. It was an out and back course, so I got to see the friends ahead of me and cheer them on, as well as the top finishers who moved like lightening. There were plenty of water stations, and friendly volunteers at any corners where we could have otherwise gone the wrong way. Everything was well marked and organized so runners didn’t have to think too hard at all. When I reached mile 12, there was a family outside of their home with a drum kit, and they were playing for us. It was a great boost when I was ready to be done.

Finally, the school came into view and after the last turn, I could see the finish line in the parking lot. I heard my name announced as I ran through the chute, and I was handed my medal. Somehow, I’d made it! The walk to the cafeteria was long but needed for my aching legs, so I slowly made my way there. The soup, bread, and cookies were waiting there, but I couldn’t stomach them just then. There were raffle prizes posted on one wall, and people sitting at tables and chatting about their day on the course. I eventually made my way to the car, where I had my healthy snacks, my warm clothes, and my massage gun waiting for me.

I would recommend this race to anyone, as long as they are okay with the possibility of winter weather. The course is beautiful and it’s a low-key event that is very well organized. I’d love to do this race again when I’m feeling better. It would be a great race for a PR!