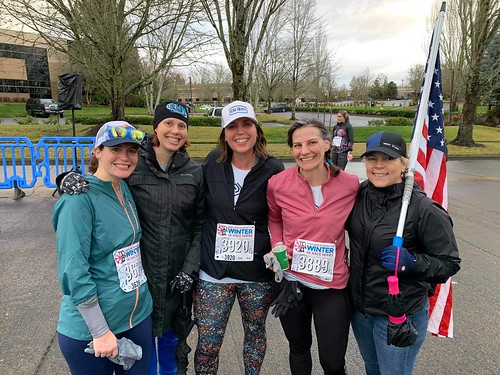 Running is better with friends! Nikki Mueller, Kelly Barten, Nichole Castaneda, Lindsay McGrath, and Kimberlie LaFavor at the finish line of the January 11, 2020 PRC Winter 5k – #2 in the series.

The January 5k in the PRC Winter 5k Series is now in the books, and we couldn’t have gotten any luckier with the weather. There have been previous years where we weren’t so lucky, and the show (or race in this case) must go on no matter what. When you are treated to none of the rain (that was originally forecasted) and no ice (which is forecasted for next week,) you count your blessings. A big part of the appeal of registering for a winter running series is that it will help get you out the door even when it’s so warm in your bed, and this Run With Paula series does not disappoint.

With a start time of 9:00AM, there was plenty of time to get to the Beaverton Portland Running Company store, which is where the races in the series start. The runs are short enough to enjoy, and are simple out and back on the business complex roads and the Fanno Creek Trail where you can high five all the runners blazing by from the other direction. It’s well marked and organized, as all of Paula’s races are, and this year, there’s Baja Fresh burritos and Rogue beer waiting for your return. Not to mention the coffee, raffles, prizes, and smiling faces and cheerful moods.

This is the third year I’ve done the series, but unfortunately the January race is the only one I’m able to make this year. The last two years, I bought the shirt and took advantage of the free option to get the monthly “badges” stamped on the sleeve with the PRC press, but this year I opted out. This is also the first year that I haven’t been in training for a big race, and it means I can experience the 5k like many other runner do.. by starting and ending with 5k of distance instead of getting to the store when it’s dark to get in extra miles before the start.

Because more and more people are catching on to this fun event, I knew I should get to the store early. There were a bunch of volunteers out, directing traffic, and the whole process took about 5 minutes. There were lots of people hanging out in the store that morning, chatting and catching up from last month’s race or making new friends. Getting my bib was quick and painless and I chatted with Paula for a few minutes, who was sunny as always. Despite getting there so early, I lost track of time quickly and found myself walking up to the start line with only about a minute to spare. I am still amazed at how there are so many people at these races but I never feel overwhelmed or overly crowded. 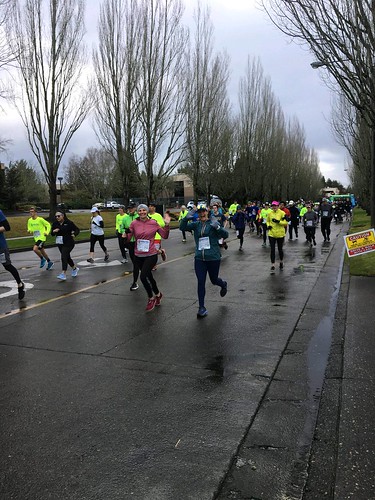 We just started, so we’re happy

The race took off on time, and I stuck with my friend Lindsay who had a time goal. There are actually a few “sneaker hills” out there on the course that aren’t super obvious, but you feel them. We did our best to avoid the mud puddles, but Fanno is pretty much is guaranteed to have them this season. It was still better than ice, which I know PRC members have had to scrape off the small bridge crossing in years past. We zoomed past the aid station and before we knew it, we were seeing runners coming back around from the turn-around. Finally, we reached the turn-around ourselves and got to cheer on all the runners behind us before heading back to the streets where every turn promised the view of the finish line. Finally, there it was, and we picked up the pace a bit.

We didn’t quite meet Lindsay’s time goal, but it was still a PR for her, so that was a pretty great way to end the race. We stood near the finish and cheered all our fellow runners behind us in, including friends and those who had clearly pushed themselves to the line and found their reward at the end.

Adrian Shipley took the title in 16:07, with the women’s race (and 3rd overall) going to Kristen Rohde with a finish time of 17:33. The PRC Race Team was out in full force, their bright blue singlets bringing the cheers as more and more of them congregated in the finish chute. The first male master’s finisher was Matthew Wilkinson at 18:03 and the first female master to cross the line was Susan Hay in 20:39. Dave Harkin kept up with the names of each finisher, and Kelly’s mom, who doesn’t do races, was impressed he knew everyone’s names until I revealed the magic of chip mats.

When we finally headed inside to the warmth of the store and the good vibes all around, we were all reminded why we like to sign up for this series. As my friend Nichole said, it makes a typical 5k (which is less distance than many of us run on any given morning) into something special. None of us won any raffle prizes that day, but we all had a great morning.

There’s still time to sign up for the last race in the series for the year, which is on Saturday February 15th. This is the best  of all three races, in my opinion, because it’s a predictor race. That means absolutely NO timing devices are allowed and you get the opportunity to guess your finish time. Whoever gets closest to their predicted time will get rewarded!! Register here for $39 and “Never Let Winter Win!!” 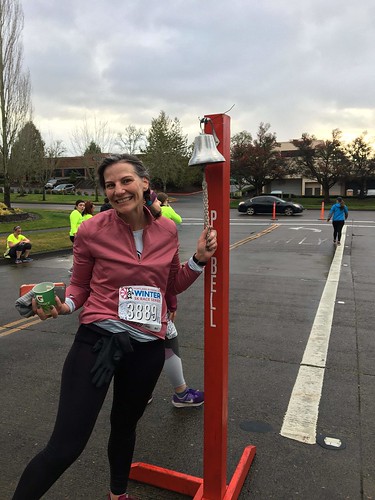