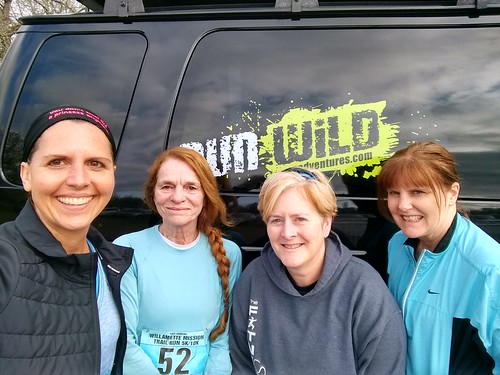 Have you ever done something that you’ve done before and for some reason it feels completely foreign – like it’s the first time you’ve ever done it? That was my experience at the Willamette Mission Trail 5K and 10K this past weekend. I ran this race 2 years ago, but due to flooding that year, the course had to be changed. This year the dry weather allowed the water to recede and the trails to dry out, so it was the “real” course. Even the start location was in a different place than 2 years ago, so I really felt like I was running this race for the first time.

Run Wild Adventures made sure the check in was quick and easy with friendly, helpful volunteers. Parking was conveniently right next to the start/finish line, so after check-in, the group I came with headed back to the car to keep warm for awhile. After all, we had arrived quite early! As start time neared, we got moving and each warmed up in our own way. The sky was overcast as both 5K and 10K racers lined up on a pea graveled area to start. As almost 150 of us headed out, the sound of many feet crunching on the gravel made for a strange, cool sound unlike anything I had experienced. Moments later we were being funneled to a trail which made things a little crowded for a time. 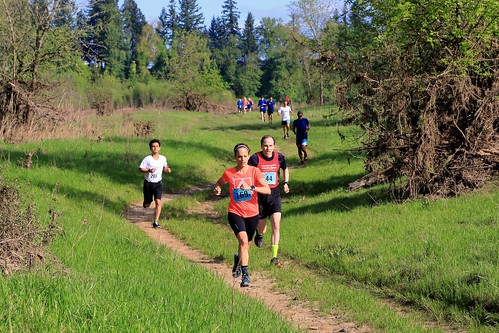 The trail was a mix of single and double track along the route. For most of the course there were regular sightings of deer prints along the trail. We ran through forested areas, grassy fields, alongside farmland, and along the river. The sun soon broke out of the clouds making it a great morning for a trail run. The scenery was beautiful, but I wasn’t able to look up as often as I would have liked. Although most of the trail was dry and hard-packed, we were often running in ruts made by vehicles when it was wet and muddy. This made for challenging foot placement at times, so looking around at the scenery wasn’t the best idea.

When the 5K runners split off from the 10K route, those of us near the back of the 10K pack were few and far between. When my friend and I came to a fork in the trail, I headed uphill.  After all, that was the direction the arrow was pointing – even though there were also markings that went straight ahead along the river. As we got to the top of the hill, we noticed that the people behind us had gone straight. We stopped and yelled down at them for direction. They seemed to be doubting their decision, as well. After some investigation and discussion, we all finally decided that running along the river was the way to go. Safety in numbers, after all. I have to admit, I was nervous about our decision for awhile, but as I thought about the map I had looked at briefly I started to feel better. (Had we followed my first instinct, we would have re-run the loop we had just completed!) We made our way to the finish line without any extra miles – thank goodness!

Afterwards there were medals and various prizes for the overall winners and first place winners of each age division. There was also some post-race food and beer available.

Overall, my second running of the Willamette Mission Trail 10K was a positive one. If you are looking for a flat, non-technical trail race – this one definitely fits the bill. And, despite my confusion, the trail is well-marked and the race well-organized. I would recommend you add this one to your “to-do list” for 2020!