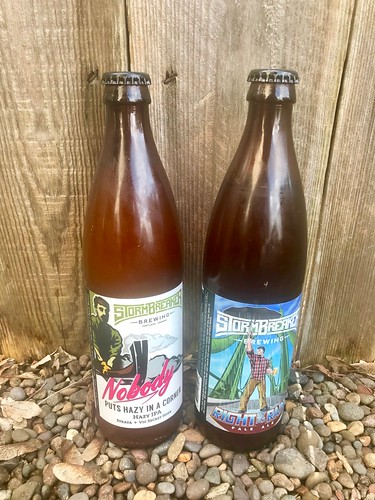 I love beer. After now having visited over 485 different breweries, it’s fair to say I have sampled a lot of beer (follow me on Untappd). From post-race pints and run club meeting locations, to beer miles and relays, running and the kegged nectar seem to go hand-in-hand in Oregon. Our Kegs and Legs feature is where beer drinking runners like me can go to find some new favorite beverages.

At last month’s Oregon Brewery Running Series event at the St. Johns StormBreaker location, we talked a little bit about some of their beers. We have a couple more this week – with names reminiscent of this time in Oregon, the Right as Rain Pale and Nobody Puts Hazy in the Corner.

Even though this has 2/3 of the same style as an IPA, this really isn’t just a knock off version. It is pretty dang light with a more drinkable quality for those who are against extreme hoppiness. I got some nice floral and citrus notes along the way.

Nobody Puts Hazy in a Corner is one on StormBreaker’s hazy rotating series and its a dirty dance in all the right ways. It’s not a super juice bomb – there is still a nice hop profile with each sip. It pours a stormy orange and there is a lot of fruitiness on the nose. If you are into the “haze craze”, this is a super solid take on the style!