After having a no-beer January, we are back for another Kegs and Legs with a new IPA from Anchor Brewing out of San Francisco. This collaboration beer is not with another brewery, but with the San Francisco Baykeeper – the only nonprofit that protects the SF Bay from pollution. I think that’s well deserving of a beer.

Here’s a snippet about Anchor from our previous features:

Enter Anchor Brewing, a brewery out of California, and one that put San Francisco on the map. You may have seen their stuff in tap houses and bottle shops, and I really like how “old school” the bottles look – simple, yet with a rustic flair and throwback to the times when Anchor was just getting started. In fact, here’s a little bit of the history of Anchor:

The rich history of Anchor Brewing can be traced all the way back to the California gold rush, when German brewer Gottlieb Brekle arrived in San Francisco with his family.

Gottlieb Brekle bought an old beer-and-billiards saloon on Pacific Street near Russian Hill for $3,500, transforming it into the American brewery that, twenty-five years later, would be renamed Anchor. German brewer Ernst F. Baruth and his son-in-law, Otto Schinkel, Jr., bought the old brewery on Pacific (the first of six Anchor locations around the City over the years) and named it Anchor. No one knows why Baruth and Schinkel chose the name Anchor, except, perhaps, for its indirect but powerful allusion to the booming Port of San Francisco. 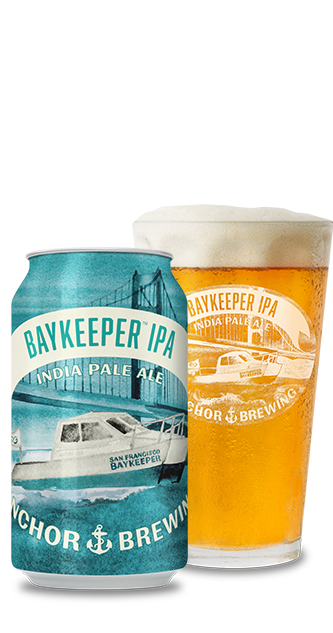 Though Anchor has some solid roots in their long-time brews, they seem to be expanding their IPA profile as their 30th anniversary looms. We reviewed their San Franpsycho IPA last year and now happily tried their new Baykeeper IPA. Here’s more about this collaboration:

At Anchor Brewing, we’re lucky to be so near the San Francisco Bay, one of the world’s most impressive natural waterways and one of California’s most important ecosystems. San Francisco Baykeeper, a local nonprofit, works nonstop to keep it that way. Only Baykeeper confronts polluters and stops harmful actions with their unique expertise in law, science, advocacy, and field investigations, helping achieve decades of legal and policy victories for a cleaner Bay.

Watercolor artist Jenna Rainey hand-painted the label on Baykeeper IPA, which features Baykeeper’s patrol boat charging through the water underneath the iconic Golden Gate Bridge. Since 1989, Baykeeper’s patrol boat has regularly monitored the San Francisco Bay, the treasure of the Bay Area, to identify and investigate pollution. From there, Baykeeper strategically uses advocacy, public education and legal action to secure smart solutions that stops pollution and restores water quality so that native wildlife and recreational sport can continue to flourish.

A portion of the proceeds from this brew will directly support San Francisco Baykeeper and their efforts to stop polluters so the Bay’s water is healthy for wildlife and local communities.

I found this beer to be quite light and effervescent. It pours a deep golden color, perhaps with just a little dollup of haze and I really get a nice nose with piney fruitiness. I really like that they used local SF Bay malt to round out the beer.

Baykeeper IPA is a limited release beer and only available until March, so I recommend grabbing some ASAP!