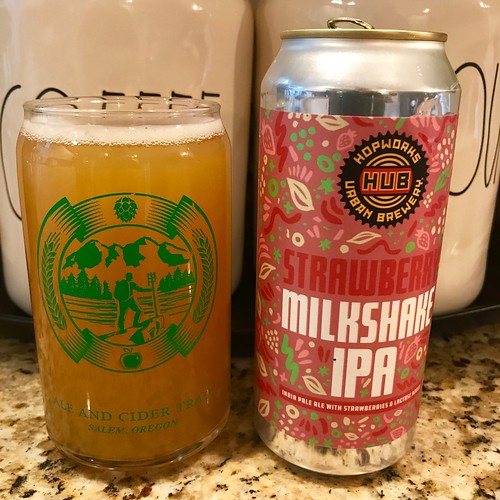 I love beer. After now having visited over 380 different breweries, it’s fair to say I have sampled a lot of beer (follow me on Untappd). From post-race pints and run club meeting locations, to beer miles and relays, running and the kegged nectar seem to go hand-in-hand in Oregon. Our Kegs and Legs feature is where beer drinking runners like me can go to find some new favorite beverages.

We have featured a wide range of HUB’s beers over the past few years and we are are excited to showcase a few more top notch IPA’s from their catalog – the Kinda Famous Hazy IPA and Strawberry Milkshake IPA. Here’s a little bit about HUB, for the uninitiated:

Hopworks Urban Brewery, or HUB for short, is one of the first Portland breweries I ever went to. At the time, I was working near Powell and kept passing them on a daily basis. I wasn’t much of a craft beer drinker at the time, but thought I would stop in. The whole vibe of their amazing brewery, combined with their vast selection, really made me a fan for life – and helped point me in the direction of checking out as many breweries as possible. It is also a staple for my 1st van to stop and refuel after our first Hood to Coast relay legs.

Kinda Famous Hazy IPA is their newest in their hazy IpA series what allows brewers to try out new hops and combos. I think they really hit it out of the park with this one as it’s marriage of Hallertau Blanc (apparently an offshoot of Cascade) and Mosaic hops is an amazing mixture of citrus and bitterness that really hits the spot.

Milkshake IPA’s aren’t my favorite IPA styling, but I have found a couple I gravitate towards. I can now add the Strawberry Milkshake IPA to that list. In fact, it’s one of the best MIPA’s I’ve ever had. It will be even better once the weather officially turns and will be an absolutely stellar summer beer, with a nice creamy sweetness and a very berry-infused taste.

Check both of these out!