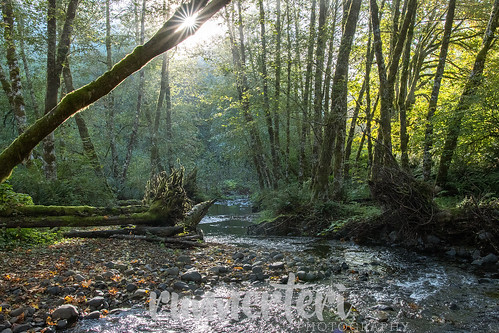 “Fast in the front, tough in the back.” I was running in front of another runner on the single-track trail of the 2018 Elk-Kings Trail Races and we were chatting about some of the strong runners out on the difficult course that day. Some of them were so fast at the front of the line that it simply amazed us, but we also agreed there was something to be said for those of us who were going to be out there on our feet for twice as long. We all had the same mountains to climb and the same distance. How long it took really didn’t matter as much as finishing it did.

This was my third 50k since June, which was when I’d completed my first after doing a marathon in April. My friends all thought I was a little crazy but many of the runners out there that day really got it. Once you’ve trained up to a certain distance, it’s easier to just keep going than to give up and start again another day. This is where I was, and my times were getting slower, my legs getting heavier, and my training getting more and more weary. I was tired. But when the day at Elk-Kings arrived, I was excited to bring whatever I had left in me to the trails that day.

The Elk-Kings Trail Races take place in a little slice of heaven out at the Tillamook Forest. There are two giant mountains to conquer .. The Elk and the Kings Mountains (as you might have guessed from the race title.) Make no mistake, they are a huge challenge to overcome, and none of the races that day (the 50k, the 25k, and the Mountain Marathon) would be easy. But as with most mountains, you’ll be rewarded with beauty at the top, and the journey is usually worth the pain. 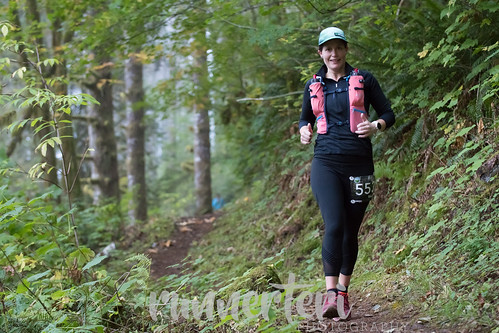 This year’s race afforded us some luck, as the weather was gorgeous. The forecast was for temps in the 70’s and I couldn’t think of a better place to go for a day-long hike, which was how I chose to approach it mentally. When I got out to the Jones Creek Day Use area where the race was to start, it was still black outside. I had gotten there super early, as I was anxious and not sleeping anyway, plus I wanted to make sure parking wasn’t going to be an issue. I got waved in by the volunteer and it was so much easier than I’d had it planned in my head, like so many other things. I went to retrieve my race information from the friendly Go Beyond table where they had coffee and samples and lots of smiling faces waiting.

After some circling around the area and a couple of porta-potty visits for my nervous bladder, I made my way down the trail marked for the 50k. It was thankfully getting lighter out by then, though I did walk a bit too far when I saw the Forestry Center ahead. It was easy to turn back to the Go Beyond tent that was waiting, and there were a handful of people gathering there. It was already looking like we had a clear day ahead, but it was cold out there none the less. We got a spiel from our race directors, who informed us to be on the lookout for orange cones and to stay on the main paths if there was ever any doubt on the trail. And then, off we went!

The course, to say the least, was stunning. I felt good, and after having run two events in Central Oregon in previous weeks, it felt good to be able to breathe out there in the forest. The trees were lush and green and the forest was serene. The Wilson River was breathtaking and had a calming effect on my nerves. I felt amazing and told myself to remember this feeling when it got hard. The hills were not enormous early on and there was beauty everywhere to take in. The 1st aid station came pretty early and everyone there cheered for us like we were at mile 26 of a marathon. I would come to find out that every one of the aid stations would be like that. The volunteers at every one of them were the best I’d ever had. They were there to serve us with all sorts of fruit and nutrition and candy and chips and drinks and anything else I felt an ultra runner would need. They treated us like rock stars, though they were the true stars. They were friendly and the best cheerleaders a tired runner could ask for. They really were a very special highlight of the day for me. 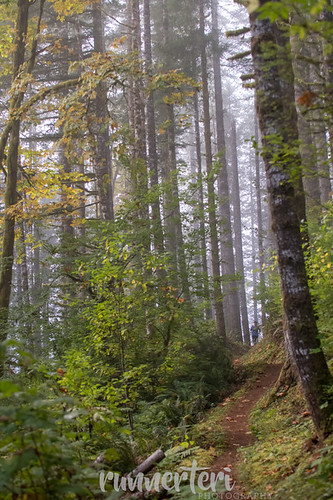 And of course, the race got harder. There were lots of mountains to climb as well as descend. The 6500 feet of elevation gain definitely wreaked it’s havoc on my calves, but the long stretches of downhill running was the hardest because it just made my hip flexors scream. There were some gorgeous mountaintop views in places though, and so much to distract you from the pain. I also had the pleasure of meeting some really nice people out on the course. Everyone has their reasons for running ultras and I found that I had a lot in common with many. Ultras are such a unique experience because they are smaller and humbler than most of the big races, and they feel a lot more personal. Since the course was a double out and back, I saw a lot of the faster runners come blazing past me and they were very inspiring.

When I reached the aid station that informed me we were at mile 19.7, I was in for some disappointment, as my watch had shown we were well over 22 miles. GPS cannot be trusted out on the trails but I was very disheartened to find that I was not as far as I thought I was. So much of running is mental anyway, so this was a bit of a low point for me. I knew that I had to make it to 23 miles before the cut-off time of 2:00PM and I was pretty sure I’d do it, but the thought did loom in the back of my head that something could cause me to miss it. I got to the station a little after 1:00PM so I was relieved by that, but there was a girl who came in behind me that had fallen a couple of times and had decided to throw in the towel. To make it 23 miles and have to go home would be really hard, and she was crying because she really wanted to finish. My heart went out to her and it made me feel very fortunate. I had rolled my ankles a few times and stumbled a few more, but I hadn’t done any damage to my body other than the usual abuse that long distance runners experience all the time. I kept going and told myself to dig deep, as I was getting pretty tired and sore by this point.

The final aid station was 5.5 miles away and I was told that it would mostly be flat to the finish. However, we had some serious climbing ahead once again before we reached that flat section. It was getting increasingly hard to pick my feet up and even the flat areas were getting to be an obstacle. There were lots of leaves on the trail that obstructed the views of the tree roots beneath them, so I took it easy to avoid a last-minute ankle sprain or bloody knees. When I got to the final aid station on a bridge, the excitement was infectious, as I knew I only had a little over 2 miles left before I was done. I didn’t linger long and when I got back to the place I’d started in the dark many hours before, I knew that the Forestry Center was really close. It was sort of cruel to make us climb those final steps up the bridge to the finish line, but there it was.. and so I went for it. Everyone was cheering and I almost felt like I could run another mile. Almost.

I was handed a beer glass and a big smile from the race directors. I had finally completed my last big race of the year and I felt I’d earned every last drop of beer I was going to pour into that glass. I rounded up my last bit of energy for the food line and finally got to sit and enjoy watching all of the other finishers come through. It was my favorite race of the year, despite being the most challenging.

I can’t recommend the Go Beyond races more. They are always well organized and well-marked. The volunteers are the best around and the race directors are wonderful people too. If you’re looking for a good trail race, these guys know their stuff. They won’t steer you wrong. 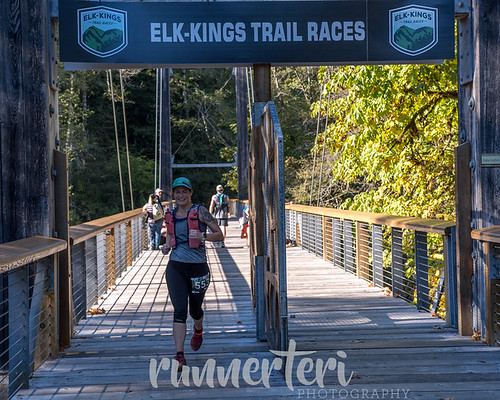