Sunday, October 7th I woke up to what I consider “perfect race weather!” It was 48 degrees in Portland! My friends and I had arrived in Portland the previous day and went to packet pick up at the Hilton, downtown Portland (921 SW Sixth Ave).  Packet Pick up was down in the Grand Ballroom. It was very well organized and fun! There was information on other races, fun running gear to buy, and samples to try!  Race director Paula Harkin was there, talking to runners and answering questions. I enjoyed the atmosphere and picking out some really cool “Portlandathon“ gear for my running collection. Along with our running bibs, we received a Cliff bar, a Portlandathon running shirt, a Portlandathon pack and fliers for upcoming races.

Sunday morning my hotel was a short half mile away from the starting line located on SW Naito Parkway at SW Salmon Street. I loved the new started/finish line at the Waterfront. I was eager to run Portlandathon and check out the new course changes compared to years past Portland Marathon events. I arrived at the starting line 30 minute early. I had plenty of time to use the port-a-potties twice and check gear into bag check only one block from the start/finish line. I did see they had a nice information booth set up near the starting line for any questions runners had. I ended up needing to get a bib to a friend that morning and was able to leave it there for him with no issues. 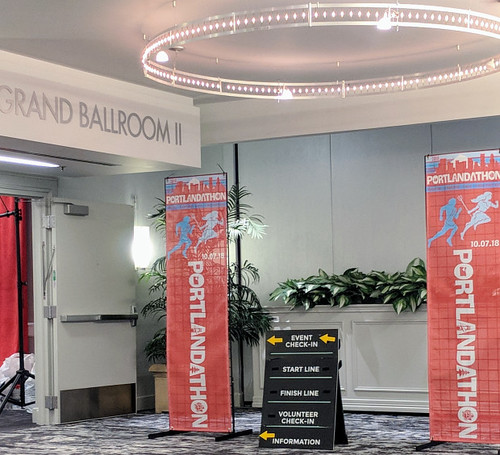 With only about five minutes to 7:00 (marathon start), I made my way over to the starting line to listen to announcements and the Star Spangled Banner. I saw a running friend just before the gun went off. It was a nice surprise as we started off together, running the same speed for the first several miles.

It was a nice smooth start, right on time. It was slightly crowded at the start, as to be expected but not to crowded if you needed to pass someone.

This new course has two out and backs. The first one was pretty short and sweet. We ran down NW Front Ave until we hit mile three, did our turn and .5 miles later turned to go out NW St. Helens Rd. These early miles felt very easy and manageable. I really liked that the first out and back was short! As I headed to the St. John’s bridge I was reminded that instead of running up the bridge around mile 17 (in past years), it was now mile 9! Running up the hill to the bridge was so much easier at mile 9. I really enjoyed this part and getting to the top was excellent!  I turned right, to go up over the bridge and enjoyed every minute of that bridge! Such a spectacular view! 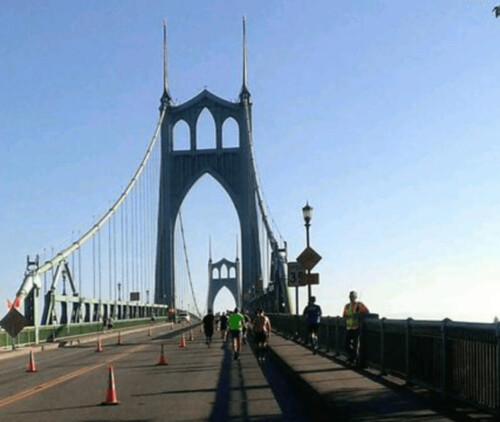 Running over the St. John’s bridge is one of the things I think is hard about Portland, but I also think it’s one of the most enjoyable parts of the race!  After running down off the bridge, runners took a right, into a neighborhood. This was a pleasant area because many locals were out in their yards cheering for us as we ran by. Hearing cheers is always helpful as fatigue starts to set in! The turn-a-round was just after mile 14. We did go over a timing mat about one mile before the turn-a-round. I was disappointed when I later looked at my time to find out the timing mat hadn’t picked up my chip time or my husbands chip time. I’m not sure what the issue with that was.

The run back to the riverfront finish line started to get harder and harder. I was looking forward to running back over the St. John’s bridge as it wasn’t as steep from this side of town. At the top of the bridge the 2nd time, I realized I was at about 17.5 miles! I thought, “it’s just downhill from here!” Running down that hill on the other side was a great feeling! Although runners had spread out, I still had many runners around me! I even ran into a Hood-to-Coast team mate.

As I hit about mile 24, it felt like the temperature dropped slightly, maybe it was just I was slowing down, or possibly because it had started raining slightly. I had a tank on, and my arms and hands got terribly cold! I tried to move my fingers up and down to keep them from getting stiff. The finish line wasn’t far and I loved that it could be seen from quite a ways back!  It was visible and it gave me hope to finish up strong. 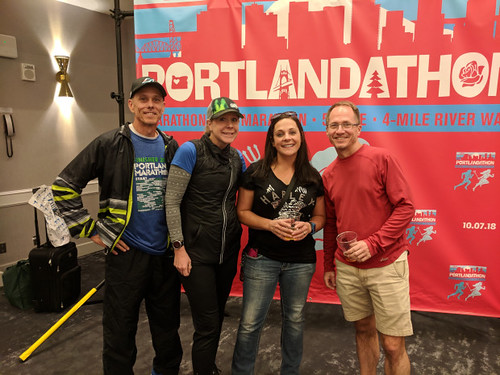 As I crossed the finish line I heard my name over the loud speaker and went immediately over to a temporary wall that was set up to the left. I needed to lean on something. I didn’t feel very good and I was freezing.  A volunteer came to me and asked if I was ok and I assured him I was. He insisted on standing with me. I appreciated that there were volunteers and aid people watching for runners who needed help as they finished up. I went and sat on the curb just around the corner for a long while. Another volunteer came to me.  This time it was insisted that I see a medic at the aid station.  I insisted I just needed a mylar blanket. She told me she thought they were out. This actually broke my heart just a little. I was cold and I wanted a blanket!!!! I told the nice lady I would be okay and got up, was given my finishers medal and then I saw a group of men, all with mylar blankets. I went to the group and asked, “where’d you get the blankets?” They kinda shrugged their shoulders like they weren’t sure and one of them who had his own jacket, said, “here, take mine.” It felt like Christmas! I then saw two friends, then my husband! I went and sat on the curb with my husband for a long time. I tried to eat a part of a bagel. Portlandathon had a nice food spread of different types of bagels, fruit, chips, chocolate milk and water. Soon a friend found us sitting there, surrounded by the crowd and handed me a sweatshirt!

I wasn’t well enough at the end to enjoy the post marathon party, but Paula and her crew had quite a set up! There was a pop group playing called Hit machine and lots of booths set up by the finish line under the covered area in the World Trade Center Courtyard! Stanford’s Restaurant was serving food and and there was beer from Rogue Brewing. Finishers were happy!  ven though I got cold at the end, it really was perfect race weather in my book!

On the way home, I stopped to eat! I was finally feeling better! Check out that AWESOME finishers medal! 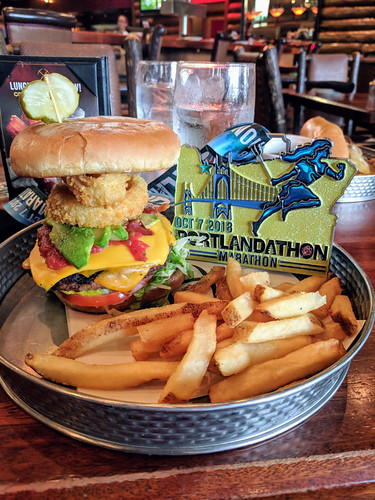 A friend of mine ran the half marathon (start time 8:20).  She ended up getting stopped by the freight train that caused many runners problems.  My friend lost 7 minutes, but I have read, that it affected some runners by up to 22 minutes.  This was not the race directors fault, it wasn’t suppose to be a problem that Sunday, but it did indeed happen, as it has stopped running in years past as well. This is a problem that nobody has been able to figure out yet.

A big thanks for Paula and her awesome crew for a very well done, enjoyable event! A word about the train delay from Portlandathon website:

TRAIN DELAY Inquiries-we are compiling data from runners who were impacted by the train. We are working diligently to find solutions, remedies, and to otherwise address individual issues. We know that this has impacted many, many athletes. Please use the inquiry link above to submit GPS data if you have it, details about personal delays, and any other observations you would like to add.

Updated Wednesday, October 10, 2018 (7:19am): we are creating updated files for all inquiring athletes who are requesting a train delay adjustment. Thank you for your patience as we work through these requests. ***IMPORTANT*** We have not received official guidance from outside organizations regarding adjusted times. For Half Marathon qualifying races, your times will be adjusted ASAP. For marathon qualifying races, we will work with each individual claim as we receive them. We stand behind these adjustments and we will work with governing bodies and other events to assist you in any way we can.

Updated Thursday, October 11, 2018 (4:20pm): adjustments to the half marathon are continuing to be submitted, approved, and changed in the results. We do not anticipate having official word from any other organizations regarding the marathon until next week.

I am a 41 year-old runner from Dallas, OR. I am married to Jerry (also a runner) and we have three kids (one who will run with us on occasion). I work full time at West Valley Hospital/Salem Health and run as often as I can. I ran in High school but as an adult, started running in 2008. Since then, I have completed 13 full marathons, numerous 5k, 10ks and 15k. I've run two Ultras and just completed my 31st half marathon. My goal is the get my BQ in 2018 at Eugene Marathon! (Pinch me, I DID IT!!!) I also organize a local running group called ZaoFit (on facebook). I LOVE running with others - it is what keeps me motivated to stay consistent, and to keep dreaming big.