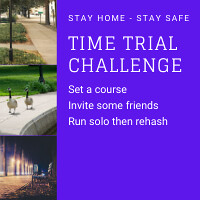 A time trial is a run/race format where each person runs a designated route on their schedule and then times are compared to determine a winner. There are no mass starts, and aside from a runner passing (or being passed by) another participant, there’s very little contact. (The Greenway Trail Trial, an ORRC race for which two RunOregon bloggers are volunteer race directors, is a time trial.)

With even more reason to self-isolate and avoid interactions with people outside your home, even this might be too much right now. Fortunately with running apps like Strava and RunKeeper, though, you can set up a time-trial challenge of your own.

Simply select a route — it should be in a low-traffic area and avoid designated walking trails and paths such as the Springwater Corridor, Westside Trail, or Tualatin’s Discovery Trail, because those areas are more crowded currently. The route should also be safe from vehicular traffic, avoid tricky intersections, and have a safe sidewalk and ideally a bike line (in case you do encounter someone and want to give space). Finally, because you’ll be asking folks to all run the same designated route, there should be parking near the start.

To make it even safer, let your friends schedule “start times” and don’t start the next person until there’s no way the two participants could overlap. If it’s an out-and-back, for example, the first person will have to be completely done before the second could start. If it’s a loop course, you just have to keep each person’s pace in mind.

While Strava already has Segments, allowing you to challenge other runners on specific stretches, I suggest creating new segments for this and making them visible only to your friends with whom you’re doing this challenge.

You could award a winner based on speed, closest time to the average of all participants’ finish time, or have each person throw $5 into a pot and draw a winner at random.

Then, of course, have a Zoom meet-up to rehash the run. You could even have a crafty friend create medals or commemorative tokens for the “race.”

We can’t tell you when racing will return to normal. It may not be this summer at all, and even after restrictions are lifted, individuals may be wary to return to events with large crowds. This is just one way to create a little friendly competition, keep working towards running goals – and the best part about it – it’s free!