The back of the Dare Crossback by Brooks. Note the smooth material lack of seams around the torso.

Bottom line: Get to a local running store and try it on. If you like it in store, buy it. If you need a different size or it doesn’t work out, you can return it.

Full review
I’m a long-time Brooks Juno wearer (since it was under the Moving Comfort label) and the Crossback and Racerback running bras are somewhat similar to the Juno, so they were my first bra from the new Dare Run Bra line. They’re all racerbacks and both provide ample coverage on the side of your body (aka sideboob).

I won’t spend a ton of time on the Racerback, as there were some deficiencies to the construction that really limited it’s versatility. You can go to Brooks’ website and see the number of reviews that outline the challenges of the bra – the straps won’t stay up and it’s not as supportive for high impact activities. I would generally echo this feedback, which is a bummer. However, I did find it constructed nicely to the touch and, thus, it is comfortable for less intensive activities like yoga and walking. It wasn’t my favorite, but it’s easy enough to return (see below). 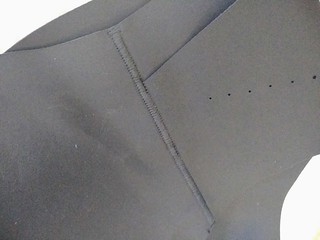 However, my first reaction with the Crossback was that the material was … amazing. It’s a seamless bra, with the construction based on heat-fusion instead of stitching. That doesn’t mean there is no stitching – there is still some around the cup area, but these seams are made to minimize hot spots. You can see some of this stitching in the photo – this is the seam where the front (cup) of the bra (to the left) meets the back of the bra (to the right). The seam is exceptionally smooth and I couldn’t feel it when the bra was on.

Going into this review, I’d been having some breathing issues that I was chalking up to perhaps my band size being too small, so I decided to go up a band size. (Turns out it was allergies acting up. I started using my inhaler and the breathing problem got better.) Because this bra is sized differently, I had to check out the bra size chart (linked from every bra on the Brooks website). Check it out below – it’s offering their sizes compared with usual S/M/L. 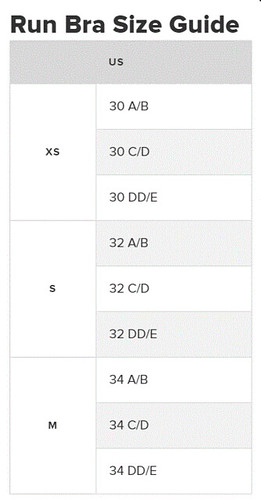 I usually wear a 34D or DD, so I went with a 36C/D to start with. Just trying it on, the bra was very comfortable. I didn’t feel bound-in the way I often do when trying on a high-impact bra. I could take a deep breath, the shoulder straps were the right length, and there was nothing poking or digging in.

However, when I went for a run, I realized that I’d picked the wrong size. Now, with Brooks, you can return it even after it’s been worn. They want you to have the right fit so you can enjoy your run. Here’s their return policy, from their website:

Take your Brooks gear for a 90-day trial run. Put it through its paces and sweat in it as much as you want. If you are not 100% satisfied, return it to us for free.

So, I went back down in band size but up in cup size, and that was the right fit for me.

Compared to the Juno, the Dare Crossback comes up a little higher under the arms. I personally like this, because it’s just more comfortable. The Dare Crossback is also smoother on your back – there’s no hook-and-eye closure that can create a hot spot, and no tag that you have to get to lay flat like on the Juno. I also prefer the Dare Crossback’s straps. Even though they’re not adjustable, they worked for me (keep in mind, every body is different, so again, you’ve gotta tray it on) and didn’t create pressure at the adjustment point.

One of Juno’s popular features is slightly molded cups, which the Dare Crossback offers as well. It’s not padding, just slightly thicker material, which provides modesty. But my primary reason for liking this feature is that by encapsulating each breast, the Crossback is comfy all day without squishing everything together, which can cause sweating and itching even before your workout. The other reason that’s right at the top of the list is that because the entire bra is made out of slightly elastic fabric is that it’s smooth and doesn’t get hot, then chafe, when running.

Try one out for yourself and remember – just like shoes, you’ve gotta log a few miles in a bra before you know whether it’s right for you. Priced at $75 and $60 respectively, it won’t break the bank, either!