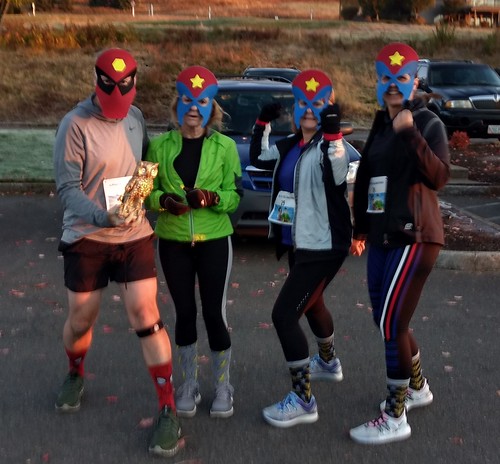 Costume runs are a bit out of my comfort zone, but a few friends and I decided to try the Heroes vs Villains 5K. I didn’t have any great costume ideas, but fortunately, my friend made a trip to the Dollar Store and got us some super hero masks. That was easy enough to be in my comfort zone!

Race day was beautifully clear and ridiculously cold. After checking in at packet pick-up, we hurried back to the warmth of the car – not quite ready to brave the low 30 degree temperatures. Our race entry included hero (or villain) socks, so while warming ourselves in the car, we all decided that a pair of long socks wouldn’t be a bad idea and we donned our fun socks to complete our costumes. It was fun to watch others arrive and see what creative costumes they had come up with. Most people did a lot more work on their costumes than we did. I was impressed with the creativity. 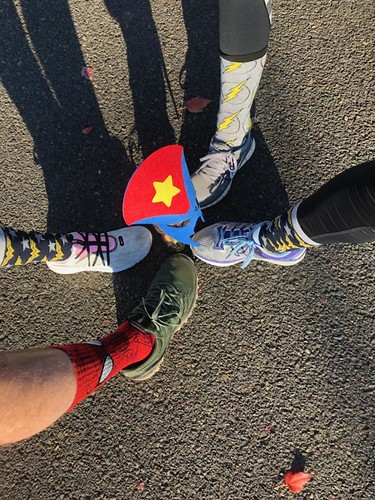 Sporting our Hero socks at Heroes vs. Villains.

Since the Villains were to get a 2 minute head start, I had pictured an event somewhat like a zombie run where the Villains would have flags or something that the Heroes would try to take if they caught up to them. However, when I received the pre-race email that this event was a “self-timed fun run,” I figured that was not the case. I have to admit, I was a bit disappointed to discover this was just a fun run. I’m not sure why, it’s not like I was going to win. I guess it just felt like it was going to be less organized or something. But, that was not the case!

Before the race began Heroes and Villains mingled, chatted, and shivered together in the frosty morning. At Villain start time, the Villains made their way to the start line with the song “Bad Boys” playing. At Hero start time, our song was, “I Need a Hero.” It was so cold, I couldn’t feel my fingers – despite my gloves – and I was wishing I had worn a warmer top. Surprisingly, I was quite thankful for my felt Dollar Store mask, as it kept my face somewhat warm. The course meandered around the first 9 holes of Salem’s Creekside Golf Club – twice. Steam rose off of the water feature on the course and the shady areas were frost-covered. I wasn’t sure a 5K was going to be long enough to actually warm up. The course was well-marked with arrows and cones, and the meandering nature of the golf course paths allowed you to see other Heroes/Villains along the route at all times.

On my 2nd lap of the course, I actually warmed up enough to take my gloves off. But, all other layers stayed put. I enjoyed sharing the course with the likes of The Incredibles, Ursula, Harry Potter, Cat Woman, Batman, Super Moms, and many more. At the finish line participants were rewarded with a fun finisher medal. There was water, post-race snacks, and music to keep your energy high. According to the website, there were awards for best costume in multiple categories, and even though the run had warmed us all up, my friends and I didn’t stick around long enough to find out. It was only a matter of time before we were bound to get cold again, and those Dollar Store masks probably weren’t going to garner any awards. Besides, a hot drink at Starbucks was calling our names!

Despite this event “just” being a fun run, I did end up enjoying myself and feeling like I was at a “real race.” As a matter of fact, I just might make my way to Salem again to take part as in this event as a Hero or perhaps a Villain next time. We’ll just have to see what the Dollar Store has for us! 😉