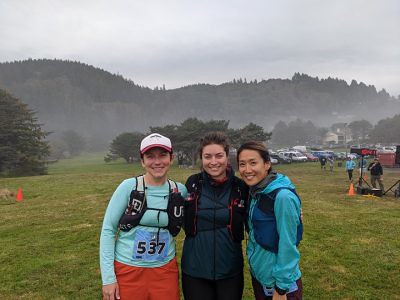 Rainshadow Running’s Oregon Coast 50k & 30k event has been on my race bucket-list for quite awhile now and I’m happy to report that I was able to finally participate, running the 30k (technically 32k at 20.1 miles). I make no exaggeration when I say that this was one of the most beautiful and well-run races, and it’s an event that I absolutely intend on doing again in the future.

October 13, 2019: Race morning was overcast, but only mildly cool, and started with an incredibly fast and seamless packet pick-up at the Adobe Resort. Not even kidding, it took a whole one minute, if that, to get my race bib. My bib happened to have two smiley face stickers adhered to it, which meant that I was to pick up a raffle prize at the conclusion of the race. I had literally run zero miles at that point and had already won something; I took this as a sign that it was going to be an awesome day. Immediately after, I prepped my hydration pack, tightened my shoe laces and pony tail, and joined a crowd of fellow 30k runners at the start area. Before I knew it, co-race director, James Varner, was giving us the course and race etiquette run-down, before giving us the final 10 second countdown. Just like that, we were off and running.

The course immediately had us running across the lawn of the Adobe Resort, making a small loop around the resort, and then finally heading off through the quaint town of Yachats. The first few miles was mostly run on pavement, so I used it as an opportunity to make a small push, getting into a good position towards the front(ish) of the pack. After some amazing coastline views, at a little less than 3 miles, we finally reached Amanda’s Trail which led us through a canopy of greenery. Soon after, we were greeted with quite a bit of elevation gain, and this seemed to continue on for quite some time until just before mile 6. The views (and the sunshine) at this point were incredible: 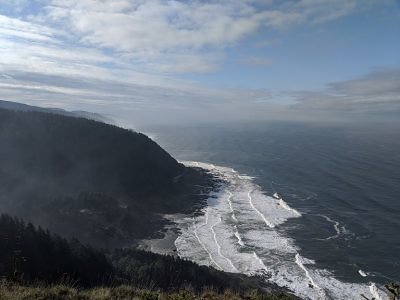 From the viewpoint it was a fast, fun descent until we reached the Cape Perpetua aid station at mile 6.7, where I stopped briefly to fuel up on a few squares of watermelon. The course from there was a loop of 2-3 miles of rolling hills, followed by a steep climb at miles 9-12. The climbing portion was admittedly tough on my legs, resulting in unwanted, intermittent cramping. When we reached the Cape Perpetua aid station again at mile 13.7, I used this as an opportunity to refill my hydration pack, chow down on more watermelon, and take a hit of some, ridiculously refreshing, Coca-Cola. From there the course followed the path we had initially come in from (back to the viewpoint), which meant more climbing and, unfortunately for me, more leg cramping; OUCH. Relief came relatively quick, however, a couple miles later as I found myself finally descending along the winding, rooty, single track trail. Any momentary thoughts of “Why do I do this to myself?” were immediately replaced with “This is seriously awesome! This is why I choose to do this.” 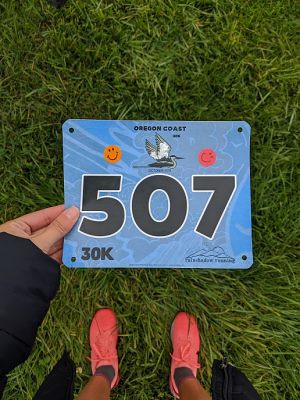 When we finally hit the stretch of pavement at the end of Amanda’s Trail (which meant we were approximately 3 miles out from the finish line) I mustered up the last bit of leg strength I had and pushed past a group of fellow racers. At the finish, I was greeted with boisterous cheers and a high five from a Hawaiian shirt clad Mr. Varner. My legs were absolutely wasted, but 20.1 miles were complete; immediate elation ensued. Post-race you could find me basking in the warm sun to the sounds of live bluegrass music, while downing 3 massive triangles of wood-fired pizza.  My day was capped off with earning a spot on the top 10 whiteboard, claiming my raffle prize, and making two new running friends. Just as I had predicted, it truly had been an awesome day.