Summer ended abruptly this year, so the early fall Molalla River Trail Race fell on an unseasonably cool and wet morning. Finding the right running clothes was quite the challenge, so I ended up packing my running bag with many options – just in case. When my friends and I arrived the packet pick-up line looked pretty long and it was beginning to sprinkle. Fortunately, the line moved quickly and the rain didn’t fully materialize. There was plenty of time to use the port-a-potties (a couple of times), decide on and revise what layers to wear, and drop off the layers we decided against at gear check before making the 1/3 mile hike to the start line. The half-marathoners had already started and those of us doing the 10K lined up for pre-race instructions before we were off and running.

Although I wasn’t there, apparently the start of the 5K – which was scheduled for 15 minutes after the 10K – was interrupted by a swarm of angry yellow jackets that had been stirred up by all commotion of the day. Unfortunately several people were stung, but the race staff was prepared and was able to get the nest under control. By the time I returned from the 10K the nest had been cordoned off and it was almost like it had never happened. Boy, am I glad I missed that! Yikes!

While subtle, the course basically starts uphill and continues climbing with a few flats and subtle downhills. While focused on the upcoming Wall – an epic climb about halfway through, I kind of forgot that there was a lot of uphill before even reaching The Wall. In fact, my friend who was running with me asked a couple of times as we climbed, “Is this The Wall?” Despite the cool drizzly weather, all that uphill warmed me up and I had to shed layers and was down to a tank top before even encountering that epic climb. Not to disappoint, Bigfoot did make an appearance along the race course, but he wisely steered clear of The Wall. When we reached The Wall the run became a hike – at least for me and those running around me. This 3/4 mile 500 foot hill had me gasping for breath even though I was hiking it! But, the scenery was great. Green forested areas with random mushrooms popping up out of the ground and quiet except for the sound of the racers spread out along the trails. 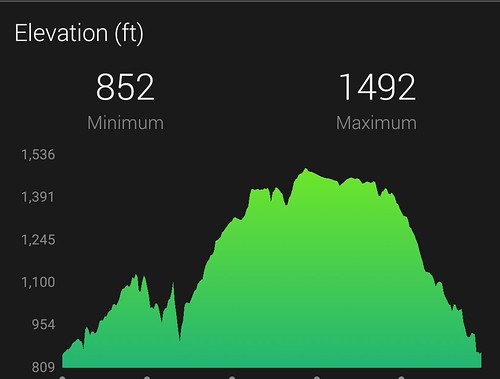 When we reached the top of The Wall there was a bell to ring as we passed and an aid station with enthusiastic volunteers that made you feel like you had just done something pretty amazing! Once we rang that bell it was time for some flat running and eventually some beautiful downhill! It also marked the start of running on some single track trails instead of the wide gravel and dirt roads we had been on. Due to the recent rain, there were some muddy sections and even a couple of small creeks to cross, but overall, the trail wasn’t too wet. But, most people did end up with varying degrees of mud splattered up the backs of their legs. I enjoyed the variety of the single track with all its twists and turns and the variety of terrain. From soft and springy to rocky and root-filled to sticky and slippery mud. It did make for less looking around at the scenery and more watching my step, but there’s just something I love about running trails – even though I tend to be much slower at it. One of the cool things about this race is that the proceeds from it go back into the Molalla community and the trail system. You’ve gotta love running on the trails to help preserve running on the trails! 🙂

After making our way down the trails we finally arrived at the gravel/dirt road which led to the finish line – a nice subtle downhill which allowed you to pick up the pace and cruise in to the finish like a rock star! We were handed our finisher medals and water, and there were space blankets available to warm up with afterwards. Then we hiked down the hill to enjoy some hot chicken noodle soup and bread. While we waited for the award presentations I took advantage of the chiropractor at the finish line, which I was in serious need of, and a friend of mine took advantage of the massage that was also available. What a bonus! Then we changed into some warm dry clothes, donned our Molalla River Trail Race beanies (so nice and warm – I love that this race does beanies instead of shirts), and headed off for lunch to enjoy a recap of our adventures and plan for the next one! I’m already looking forward to the Molalla River Trail Race in 2020!  It’s definitely a “Can’t Miss” race! 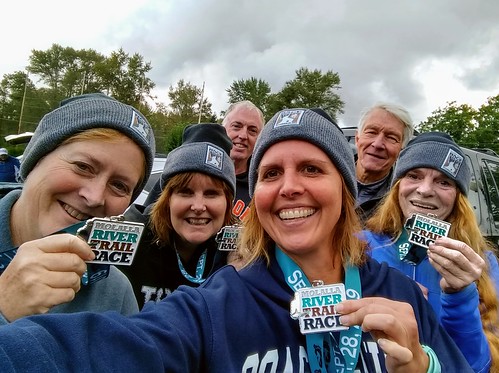 Sporting our 2019 Molalla River Trail Run medals and beanies after the race.