After missing this race last year, I was fortunate enough to not have any vacations planned this time and was able to run the half marathon. Last year they combined the ever popular High Street Hustle with the Spirit of Oregon run and continued that tradition this year. I was especially excited to run this race as a gear junkie because last year I had to look at everybody’s super cool long sleeve shirts they received for running it and was happy to rep my own this time!

My training lacked significantly this time around but was very happy with my time considering for the half marathon. I had also signed my wife up for the 5k (she doesn’t fancy herself a runner but placed in the top 30th percentile) and set a new PR for her time. This year they had a half marathon, 10k, and 5k race distances as well as a kids run with a pretty impressive turnout. The weather was perfect at a cool 45 degrees and overcast, which I’m sure helped with my performance. The course for the half started at the Oregon State Capital and ventured south up High Street (hence the previous High Street Hustle) and looped around Bush Park before winding through Willamette University and heading East through the older, established neighborhoods near Geer Park and the Oregon State Hospital before looping back to finish at the starting line. The course markings were clear and defined with Salem’s finest as well as the race volunteers directing traffic and keeping us on the right path (a huge shout out to the race directors, Salem Police Department, and volunteers). 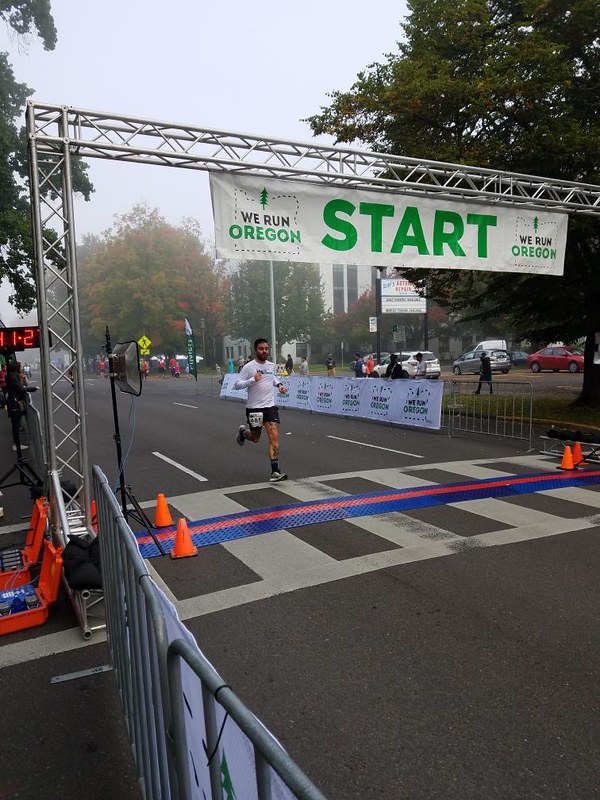 There were ample aid stations throughout the course, although I usually forgo them for distances less than 15 miles but with the lack of training this year and unusually strong hunger pangs, I was thankful every time I saw one. The volunteers provided gel, Gatorade, and water as well as loud cheering to keep me going. As most of this course routed me through neighborhoods that I was already familiar with it was a pleasant change of pace from my normal training runs which are usually done in parks to avoid the traffic, I thoroughly enjoyed being able to run through unobstructed.

I saw many local runners that I’ve met through Willamette Valley Road Runners and our local running store in town, Gallagher Fitness Resources (who also sponsored the race) which is always a pleasure and enjoyed the post-race beer and snacks with my fellow comrades. Normally I hangout for a while after the race, but even my down jacket couldn’t keep me warm enough in my sweat soaked running clothes so I only stayed for about 30 minutes of the festivities which included music, beer and cider, snacks, and massages but am already looking forward to doing this one again next year!

1 Comment on Race Recap: 2019 Spirit of Oregon Half Marathon (Salem)