September 21, 2019, the end of Summer and the Pacific Northwest Marathon! I had decided to run this marathon all the way back in April. I have friends who had ran it in the past and highly recommended it to me. I signed up and began my training several months ago. In July I suffered an injury, and like any runner I’ve come to know, I went into denial about the whole thing. As September came closer, reality quickly set in! I e-mailed the race director and changed my registration to the half with no problems. Although not in race shape, I was able to run the half safely and enjoy this awesome event as a runner.

On September 20th (Friday) I made a quick trip to packet pick up located at the PNW finish line. Things where being set up that evening, booths going up and giving stuff out and so many volunteers helping out. I meet a friend and we got our packets with no issues and also a race shirt. I didn’t like the size I had ordered and it was easily able to exchanged it right then and there.

I chose to drive down race morning, rather than renting a hotel close to the race. It was merely an hour drive for me. I arrived and parked at the school as instructed via e-mail (and website), and easily spotted the shuttle buses even in the dark. It was a little chilly that morning, but the buses were heated, making for a nice comfortable drive. We arrived at the starting line a good hour early, giving us plenty of time to use the port-a-potties and drop off bags at bag check. It was now daylight and I was getting antsy to get going.

The drop off/starting line for the half was something I’ve never experienced before and I’ve run a whole lot of races! We were out in the country, the bus stopped at the end of a driveway and we walked down the driveway into a farm house backyard.  There were plenty of port-a-potties and a race organizer was on the microphone giving instructions on what to expect and when to line up. I was truly fascinated by the whole thing because it felt as if we were really at a farmhouse hanging out! I saw some rabbits and some chickens, the air was clear and beautiful. I ran into some friends and we chatted a bit before the race. Before we knew it, it was time to line up for the race.

We took off down a beautiful country road. There was plenty of room for runners not to be cramped for spacing. A huge group of sheep out in the pasture began to run along side us runners. It was a highlight to the race start! As I settled into my pace I looked around. We were running in such gorgeous Oregon country. I love running on country roads for miles. It’s such a different feeling than running in the city, so peaceful. The roads were nice and flat with plenty of water stations and volunteers along the route. We eventually ran into Harrisburg city limits and found out way right to the finish line. The race director himself was standing high with the microphone welcoming finishers in and congratulating them. There was water, fresh apples, baby tomatoes and burritos given to all finishers. There was lots of chairs available for finishers, family and friends to sit and celebrate. 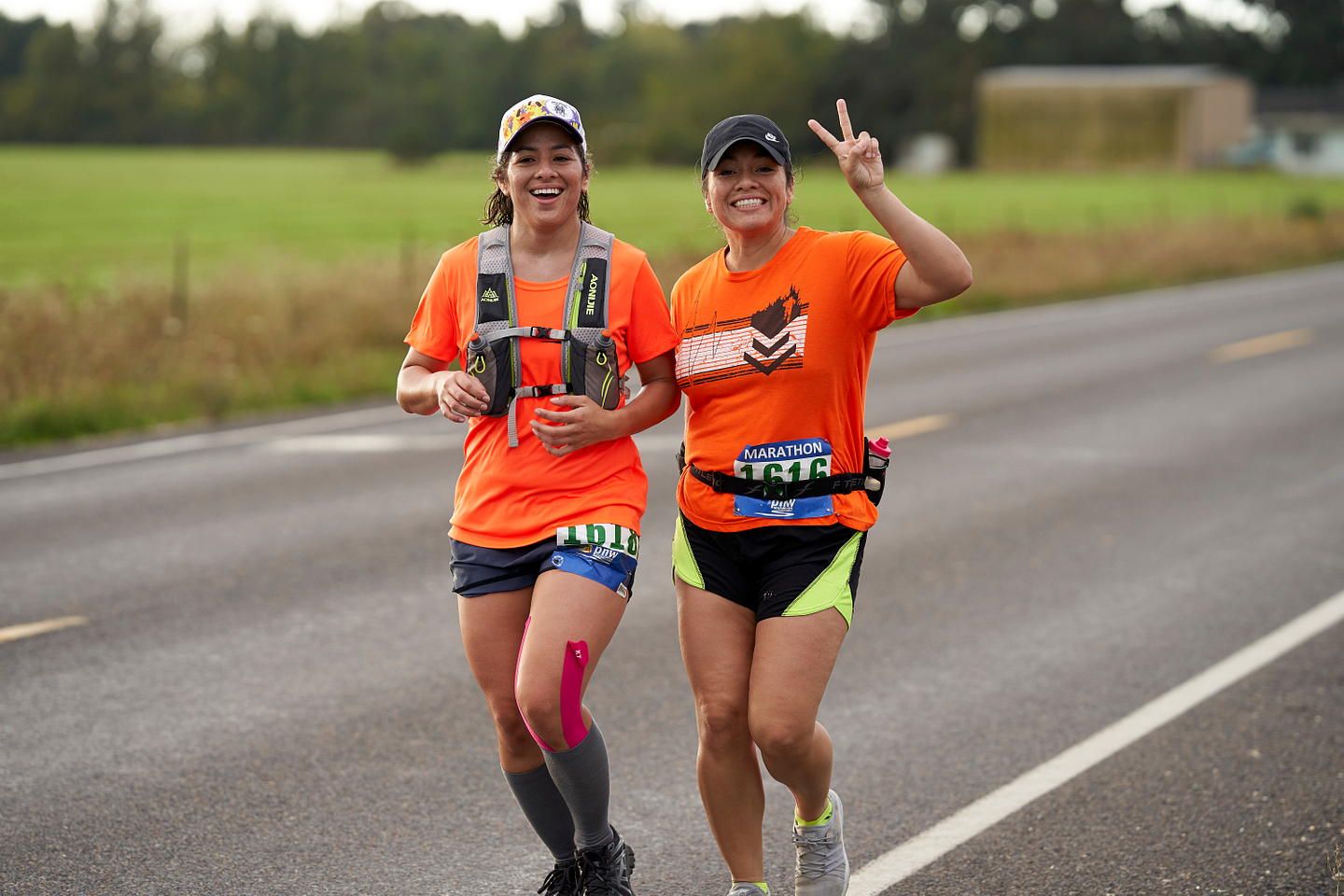 The race director was fast to announce that the race medals were stuck at the border of China. They had done their part and ordered well in advance but this is something that was out of their control. The following Saturday they had the medals in hand and came to several running stores from Eugene, all the way to Portland, giving finishers a chance to pick up. Anyone unable to come to pick-up was sent their medal in the mail.  I went to the pick up in Salem at Gallagher’s Fitness. I was greeted by name and was made to feel important as a finisher. The race director and team definitely take what they do very seriously and have a heart for people. It was very evident when I spoke to them.

2019 results for both the full and half marathon can be found HERE!

A note about the marathon course description from our PNW Race directors:

We are sorry our race course description was a little confusing for some people. While it does technically run down the Willamette River from the south to the north, the course is not quite close enough to the river for the runners to see it. After a closer look, we realized that these words could have been disappointing for some runners.
In using the description “downriver,” it was our intent to give a general idea of the location and slight elevation drop of the course, not to confuse or mislead anybody. Please accept our apology if anybody has been disheartened by this. On our website, we are changing the description to more precisely reflect the experience of the runners from their vantage point. We welcome your help in finding any other online sources that may still contain the old description.
Pacific Northwest Marathon Directors 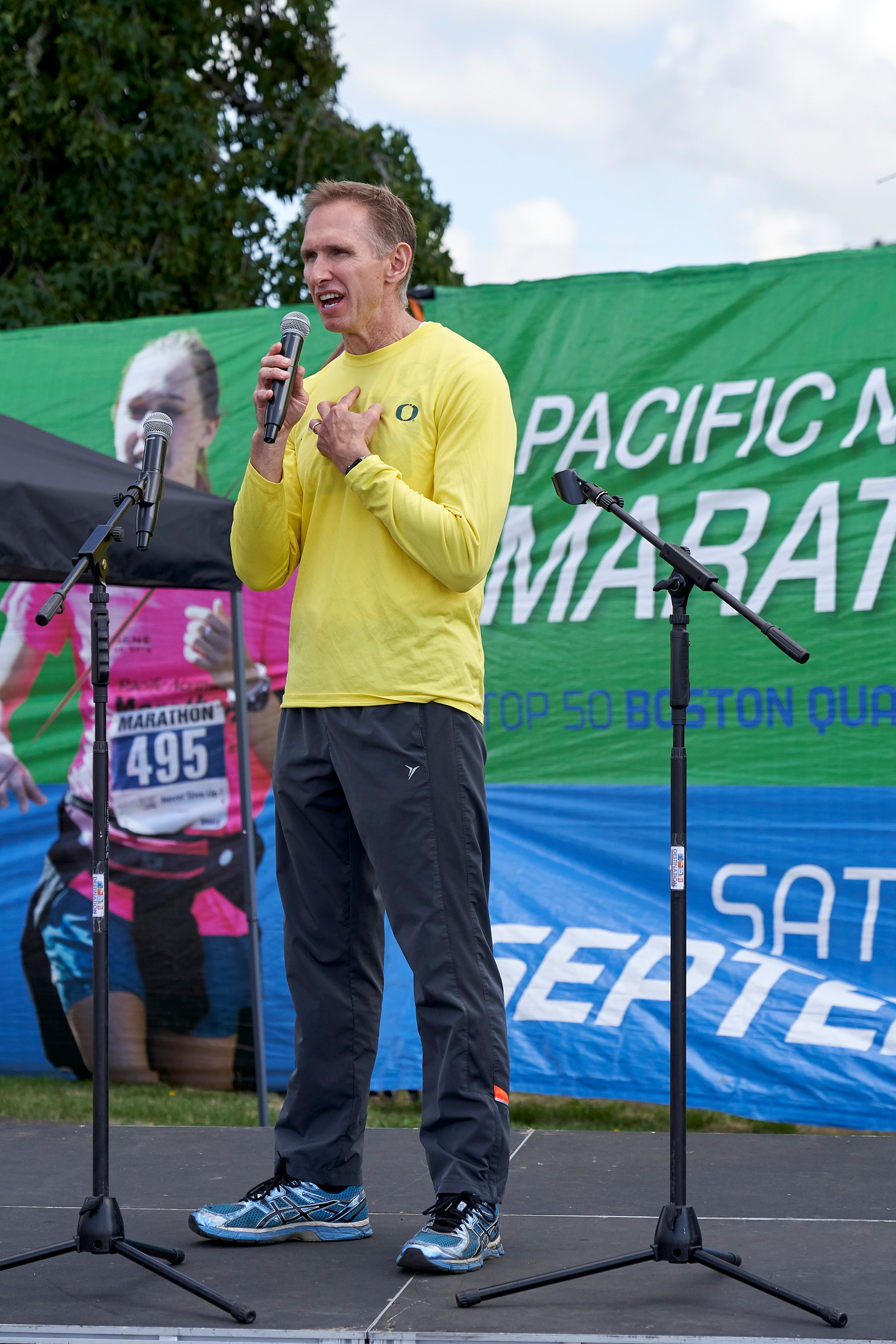 I am a 41 year-old runner from Dallas, OR. I am married to Jerry (also a runner) and we have three kids (one who will run with us on occasion). I work full time at West Valley Hospital/Salem Health and run as often as I can. I ran in High school but as an adult, started running in 2008. Since then, I have completed 13 full marathons, numerous 5k, 10ks and 15k. I've run two Ultras and just completed my 31st half marathon. My goal is the get my BQ in 2018 at Eugene Marathon! (Pinch me, I DID IT!!!) I also organize a local running group called ZaoFit (on facebook). I LOVE running with others - it is what keeps me motivated to stay consistent, and to keep dreaming big.