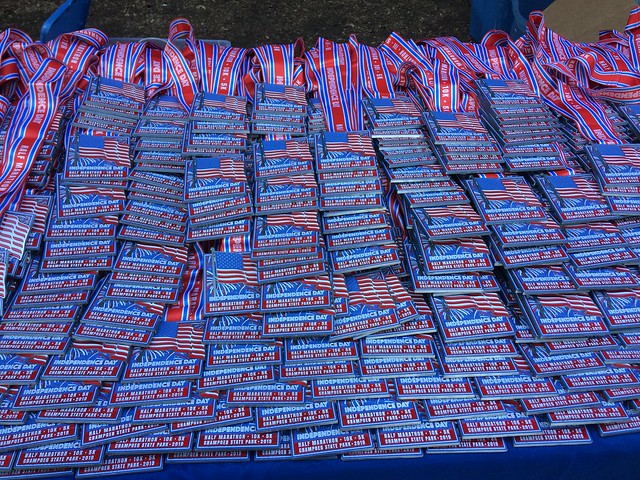 This year, the 4th of July fell on a Thursday, which created a wonderful long weekend! Given the fact that we were hosting a European exchange student for the month of July, it also meant leaving town as soon as everybody was awake. Thankfully teenagers sleep late, and I was able to squeeze in one of my favorite summer runs in the morning: Run With Paula’s Independence Day Run!

The drive to beautiful Champoeg State Park in the Willamette Valley is just 20 minutes from my home, and it was a beautiful sunny and crisp morning when I made my way to the start line. My annual State Parks parking pass sped up entry into the park considerably, but parking wouldn’t be a problem at all since several grassy fields are turned into parking lots for the event. Ready for any weather, packet pickup and snacks were set up in the Riverside Pavilion at the west end of the park. Getting my bib and shirt was quick and easy, and I had plenty of time to walk back to my car to store things I didn’t want to carry on the run.

About 10 minutes before the 8am start time, participants for all three distances were encouraged to make their way to the start line and to self-seed based on anticipated race speed. The National Anthem was sung, and soon after we were sent off on our way. The first mile of the course we were running on the road, giving everybody plenty of space to spread out and find their spot in the group. I started in the middle and did not notice any crowding or problems getting through. The sun was shining brightly, but thankfully this year the temps stayed comfortable.

The first water station for the 5k was located about half way between the 1 mile marker and the turnaround point. It was at a fork in the path, so that runners on both the “out” and the “back” portion of the race could be served from the same water and Gatorade table. The path from the water station to the turnaround is more narrow as it is the bike path along the river, but the field was stretched out very well by now and there was no crowding. At the turnaround (just like at any other significant turn in the course) the volunteers made it very clear  which direction to go and that only 5k participants should be turning around. 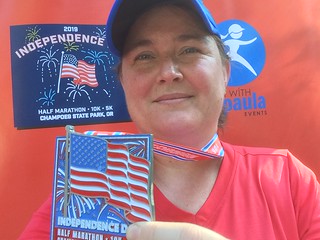 The second half of the course basically backtracked the first half, but instead of running on the road, we were now on the bike path. The hills were very gently rolling; so gently that most people would be calling the course “flat”! The final quarter mile was nicely shaded, and I was happy to see the finish arch at the end of one of these gentle hills. Immediately after the finish I received my medal and some water. After cooling off a little and catching my breath, I followed the smell of grilling burgers and picked up my post-race meal (veggie or meat burger) and drink (choice of four beers, a cider, or root beer).

Overall another great event by Run with Paula. I’ll definitely mark my calendar for next year. Complete results can be found here, and registration for the 2020 event is open here.