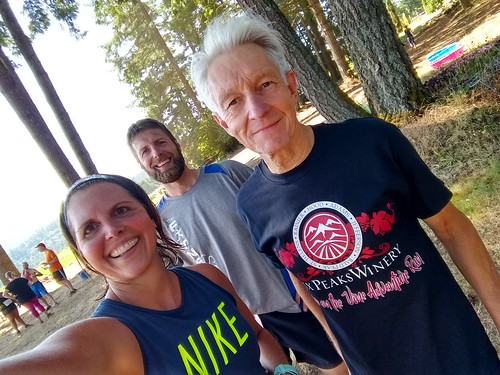 All smiles after finishing Whine on the Vine 2019.

I registered for Whine on the Vine with the expectation of a challenging race. After all, when they include the word “whine” in the name of the race, you’ve got to assume there’s a reason for the whining. X-Dog Events made sure of that! This race was held at 6-Peaks Winery (formerly J. Albin Vineyards), which is hidden outside of Newberg not far from Bald Peak. Once you wind your way to this seemingly remote location, you are met with incredible views. Unfortunately it was a bit hazy in the distance on race day, so we could only see Mt. Hood, but I’m sure there were 6 peaks out there somewhere.

This event was billed as an OCR Adventure Run, so the crowd was smaller than your typical trail race. The 4+ mile race started with the blowing of a conch shell, and we made our way downhill into the vineyards where we zig-zagged back and forth through several rows of grape vines – dodging swinging vines along the way. Next we broke out into a golden field, that was in full sun. With a 10:00 start on a summer day, it was already feeling hot. The field had a variety of crates to climb up and over and some obstacles to crawl (or roll) under. Then we climbed over an A-frame obstacle and were out of the sunshine and into the cool shade of a forested trail. What a relief!

The trail portion of this run started out great. The trail was well-groomed and it was easy running. And then things changed. Suddenly we were climbing up a steep, narrow, not-so groomed trail. That’s when the run became more of a hike for many of us. Just hiking up this section had me gasping for breath. The rest of this trail was rough. In true X-Dog style we began dodging branches, blackberry vines, and more. A large portion of this trail did not even allow for standing up straight due to all the overgrowth hanging across the trail. This made for some good camaraderie with those running around me, as we commented (whined?) about the craziness of the trail. At one point I got snagged by a blackberry vine and it cut into my arm. I didn’t think much of it – besides my initial “Ouch!” until I looked down and saw blood running down my arm. I have to admit, it looked pretty dramatic! I started looking for some grass where I could wipe my arm off, but everywhere I looked were blackberry vines. The guy running behind me (seeing the blood dripping down my arm) remembered he had put some Kleenex in his pocket – in case of allergies – and offered me one, with the repeated assurance that he had not used it! That was a life-saver. OK, not literally, but it did get things under control so that I was no longer a bio-hazard. Thank you, Kleenex carrying runner! I greatly appreciate your preparedness!

Eventually we broke out of the overgrown trail and onto an open logging-type unpaved road. It felt nice to be upright and get into more of a stride. Then it was out into an open field where once again we had to climb. But this climb had a refreshing outcome. We were climbing to the top of a big ol’ slip ‘n slide. As I heard the splash of people before me landing in the pool at the bottom, I started really looking forward to this refreshing cool-down. This slide was steep! I got some serious momentum and I may have screamed a little (or a lot) as the speed kept picking up. And then SPLASH! I reached the bottom and was officially cooled down – from head to toe. And then it was time to climb again, dripping all the way. Back to zig-zagging through the grape vines and on to the finish at the top – with a view. 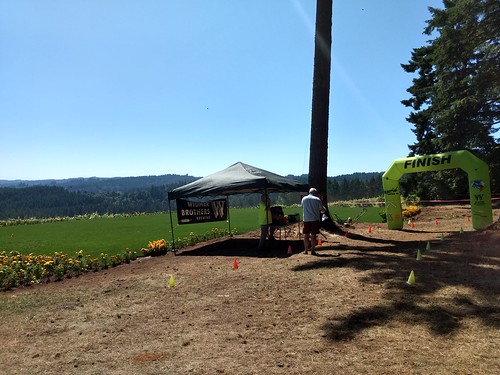 Whine on the Vine 2019 finish at scenic 6 Peaks Vineyard.

Afterwards there were mimosas available along with watermelon and pasta salad. There was also the option of wine tasting. Runners hung out in the shade of the trees or on the deck of the winery enjoying the casual, relaxing atmosphere. Overall and first place age group awards were given – which included a race specific dog tag and a case of beer. While post-race celebrations at other X-Dog events tend to be creative and entertaining, this one was pretty low-key, which seemed appropriate to the venue.

While this race was hard work, it was also a lot of fun and I would definitely run this one again. If you enjoy hills and rugged trails and have a hankering for a good slip and slide, I recommend you put Whine on the Vine on your race schedule for next year.