I’m sure it’s something we all realize when the warm weather hits – we need to stay protected from the sun. As runners, we are mostly hitting the streets and trails outside, and Oregon is about as beautiful a place in the country to do so. When my dad first was diagnosed with cancer 9 years ago, there was a small epiphany that I needed to be better about this. But, I was 26 at the time and though I had a child, I was still youthfully invincible. Now at 35, with my dad’s cancer recently returning, it has again hit home that I actually need to be serious about this. I am going to be highlighting some running items that assist in protecting us from the sun – starting with Outdoor Research.

The first item I tried out was the ActiveIce Sun Sleeves, with a 50+ UPF. This seemed like a good step into easing into greater protection, as it provided coverage on my arms but didn’t encompass the rest of my body. Admittedly, the last thing place I worry much about are my arms. They are naturally more olive and always seem to handle the sun quite well as they never burn. But that’s probably all the more reason to have sleeves as I’ve never done much protecting on them anyways.

I wore these at the most recent Fueled by Fine Wine Half, which started at 7am but running up crazy amounts of hills and through vineyards really increased my person temperature level, even though the sun wasn’t too hot that morning (70 degrees). I was sweating pretty profusely, but I was surprised that the sleeves didn’t get smashed with sweat (thanks to their “ActiveIce™ fabric technology [that] uses xylitol crystals to actually cool you as the fabric wicks away sweat“. I didn’t feel like I got overheated in them and they did their job admirably. They stayed in place the entire race – which I didn’t think would happen – likely due to the sticky grip at the top of the sleeves. I haven’t felt it pinch much, but someone with hairier arms than mine may disagree.

The L/XL was a solid size for my arms and I really liked the thumbholes. However, with those thumbholes, it means that if you are wearing a watch, you are either going to have to put it over top of the sleeves, or have it underneath and away from sight. I would like it if it had a little slit or fabric foldover for watch wearers, but that’s first world problems right there.

I can see myself using these in lieu of sunscreen when not running as well, such as working in the yard or spending a day kayaking on the lake.

I also used the Swift Cap at Fueled by Fine Wine and it held up crazy well to the sheer amounts of sweat that was pouring onto my clothes. I, however, had no such issues of moisture in my eyes due to this cap holding up. It’s a very interesting construction with basically two separate pieces put together – a nylon panel (made from 100% Supplex) and the polyester mesh sides. This mesh makes things cooler than a total fabric hat and the cap itself weighs in at just over a couple ounces. Both of these put the baseball hats that I’ve been relying on as of late to shame. It is also UPF 50+.

I also like how this somehow looks like a running cap, but at the same time doesn’t. I don’t utilize running caps all the time, but the times I have I haven’t seen a curved bill – they’ve been either flat or duckbilled. I am familiar and used to curved bill hats, so this has fit in perfectly. There are multiple colors to try, and I have every reason to believe that a $25 investment will last you a long time.

The UPF 15 Echo Hoody was the last OR product I tried and is made from Airvent 100% Polyester. It’s ridiculously light (just over 4 ounces) and seriously feels airy – perfect for wearing something sleeved that won’t overheat you on a long day. I have worn this running a few times, but it’s so pretty I had to convince myself that it was worth it. I just want to wear it outside all the time!

It’s really a beautiful shirt and the fit is nice. I’m a taller runner (6’2) and would have preferred that the hem go down further – it’s just a little short on me – but it’s a nice middle ground between slim fitting and too baggy. If you are a taller runner, you may consider sizing up if you feel you will be in the same boat.

What you may not be able to see in the above picture is the paneling. Just be aware that, while not off-putting in the least, there are visible lines on it as opposed to in being a singular color. 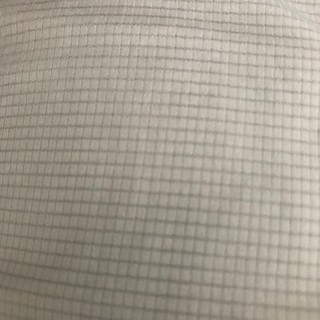 One interesting construction on the hoody is the inability to pull the sleeves up at all. The fabric over the wrist is thicker than the rest of the top, which is great for keeping the sleeves in place, but less good for breathability or if you have any desire of rolling them up. The reasoning behind it is the ability of creating a foldover mitt – allowing essentially full sun coverage everywhere except your face. I don’t fully understand the design behind this new feature (the 2018 version had thumbholes instead). Maybe it is for those who want/need complete coverage from the sun – even on the hands – but I don’t think I will be utilizing the mitten all that much. It leaves less room in the sleeves, causing a slight stretch in them (and subsequently the rest of the shirt) and the arms aren’t long enough to have my fingers feel natural. Instead, they kind of have to be balled up. Maybe this is another reason to consider sizing up.

The plus side to the thicker sleeves is the fact that they do an admirable job of wiping sweat off my face. And while the wrist portion is tighter, it’s still quite comfortable.

I really like the hood and feel that it fits quite nice. The neck line stays high with the hood up, providing the same significant sun coverage around almost the entire neck, and having it up doesn’t bring the rest of the shirt up with it. Gotta keep your neck and ears out of the sun too!

While there are some components to the Echo Hoody that aren’t my favorite, I continue to wear this with frequency. It’s just too comfortable and the moisture-wicking and anti-odor qualities seem top notch. It will also be great to use when hiking or boating this summer – so don’t write it off!

At Outdoor Research, we built a company from a feeling: the urge to get out. It’s what drives us. We love coming to work every day and inventing ever better solutions to what nature throws our way. But we’re more than just the gear we build. We’re part of a community of friends whose lives are connected by our common need to be outside. Our tribe is devoted to exploring our outdoor passions and challenging ourselves in the mountains, water and deserts of the planet we love so much.

In 1981, a brilliant scientist and adventurer named Ron Gregg watched his frostbitten partner get airlifted off a glacier on Denali. He’d spent months planning a new route in the purest style, skiing 100 miles from the road to the base of the climb. Barely halfway to the summit, their trip ended with the failure of a simple pair of gaiters. Stubborn to the end, Ron refused a seat on the helicopter and descended alone for two weeks, pondering what had happened. Somewhere along the way he realized he could both fix the gear problem and devote his life to pursuing his passion for adventure. By the end, he knew one thing for sure: He wasn’t going back to his old job.

Ron Gregg built Outdoor Research on the idea that life is an adventure, and the best gear makes it more fun. Though he died tragically in an avalanche more than a decade ago, his legacy remains at our core. In our world, it’s not about chasing heroes; It’s about being on the journey. It’s not how often we get out as much as how often we want to be out that makes us who we are. Our goal is to do all we can to expand the tribe of people who share our belief that progress is spiritual and life is unimaginable without the quest.

And we want you in it, because we’re pretty sure that the bigger our tribe gets, the better off the world will be.

Thank you to Outdoor Research for providing us with sample items. Please read our transparency page for info on how we do our reviews.