I always like to kick off Memorial Day weekend with Uberthons’ Oregon Spring race. In past years, however, it’s been a challenging race for me to participate in because the law school graduation ceremony has been on the same morning. I’ve managed to run it but have had to dash off soon after finishing. But the law school moved graduation a week earlier, so I looked forward to being to hang out a bit afterward.

One change from previous years was the venue. The Oregon Spring Half Marathon/Quarter Marathon/5K used to take place at Heirloom Roses, but this year, it was staged at nearby Champoeg State Heritage Area. I was pretty excited about going back to Champoeg Park; I hadn’t run there since 2014’s Scholarship Run. (It used to be a more frequent venue for Uberthons.) 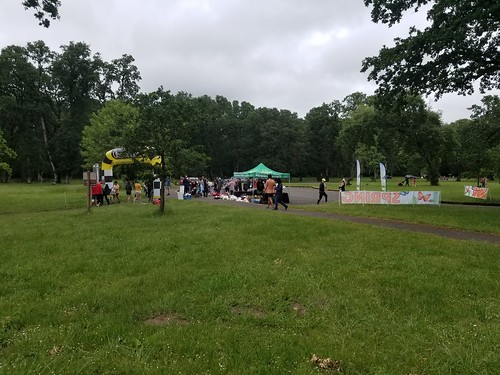 I arrived around 8:10 and parking was still plentiful. I saw fellow Run Oregon blogger Joe Dudman already heading toward the staging area. I rolled down my window, greeted him, and thought to myself, Guess I’m competing for second in my age group.

There were over a hundred of us waiting for the 5K. That made it a good sized group, large enough to feel like it was a crowd, but not so large that it would be crowded. There some last minute stragglers still picking up their race bibs within a couple of minutes of start time. The announcer (Dave Bourne) told them to hurry up! (Although with chip timing, it’s not really a big deal.) Fittingly, the music playlist had reached the glam metal song “The Final Countdown.”

The 5K started near the disc golf course and made a gentle 180 degree turn to get on to the main road through the park. From there, we headed west. Just after half a mile, we diverted from the road on to a paved trail. We were mostly parallel to the Willamette River, but I couldn’t really see the river because of the trees. The lead runners (Marla Smith and Joe Dudman) were getting far out in front, with some more chasing them, and then me.

Temperature-wise, it was ideal, about 50 degrees and no sun and no wind. It was actually kind of quiet and peaceful, Except of course for the struggle to maintain my 5K pace…

The turnaround point for the 5K was just after we reached the Pioneer Memorial Building and, like the opening of the race, was a gentle, wide turnaround rather than a sharp U-turn. That brought us back to the main park road. At this point, there was basically one runner about half a minute or so ahead of me, and then some others farther ahead than that but whom I couldn’t see because of trees blocking the view of the route.

With about half a mile left to go, I could hear the race announcer in the distance. Just a couple of laps left, I thought to myself. The path wound back toward the disc golf course and back under the inflatable Uberthons arch for the end!

Of course, there’s the usual Uberthons race bling — the art on the finisher’s medal (upper right) matches the banner art on the race bib. What you can’t see on the bib is that the tearaway strip on the bottom (used to get into the post-race catering area) contained a pull quote from Joe Dudman’s pre-race speech at the Run for Boston: “Runners truly belong to a worldwide community, a community that transcends political, religious, and social boundaries. If everyone was a runner there would be a lot less anger and hatred in the world.“ 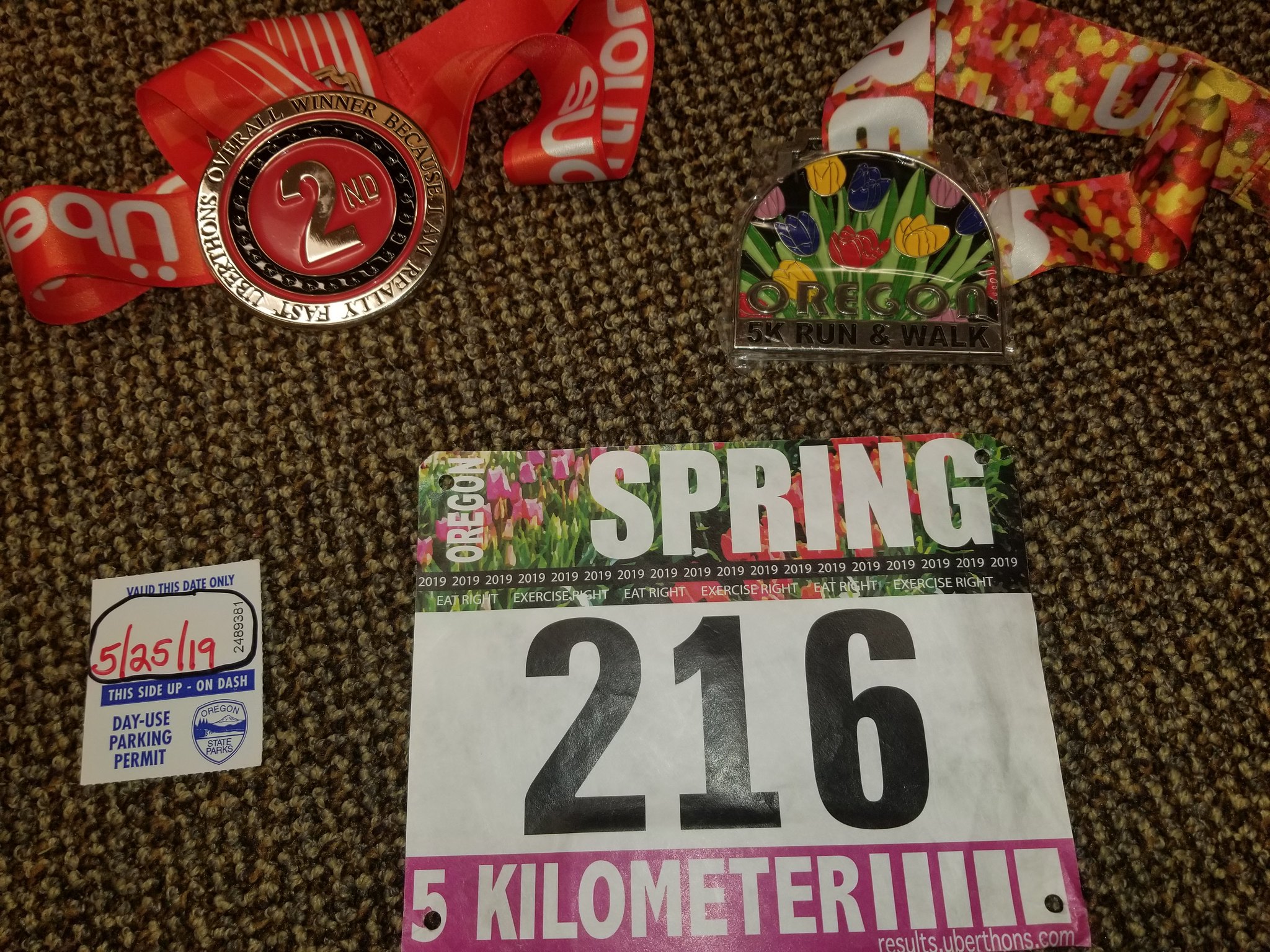 You know what comes after finishing an Uberthons race? Well, there’s usually (now) the gong, though it was absent from this race. Or there are the various award announcements, which include not just the overall 1st/2d/3d, or those plus the 1st/2d/3d Masters and Seniors medals, but also the reading of the age group winners. But there’s also the eating…! As this was one of the four signature seasonal events that Uberthons stages every year, the post-race spread is something extra. This one was catered by Qdoba — there were tortillas, white and brown rice, black and pinto beans, chicken, pico de gallo, cheese, lettuce, and chips. Sure, it was just 9:30 in the morning, but I was going to be skipping lunch because of a Pokemon Go event from 11-2, so I was more than happy to make a nice big chicken bowl. 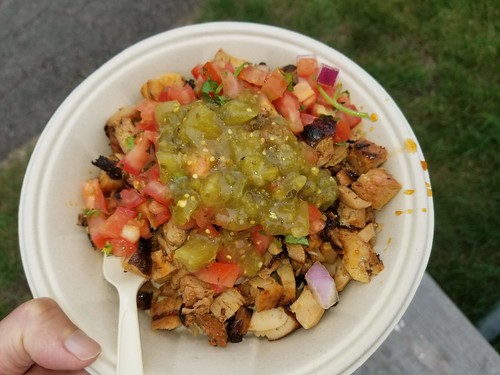 Having not raced in Champoeg Park in years, I rediscovered what a great venue it is. If I were in better shape, I would’ve opted for the quarter marathon, which looks like it tracked the side of the river for the part that extended past the first 5K. Next year!

Full results for the 5K, quarter marathon, and half marathon can be found here.