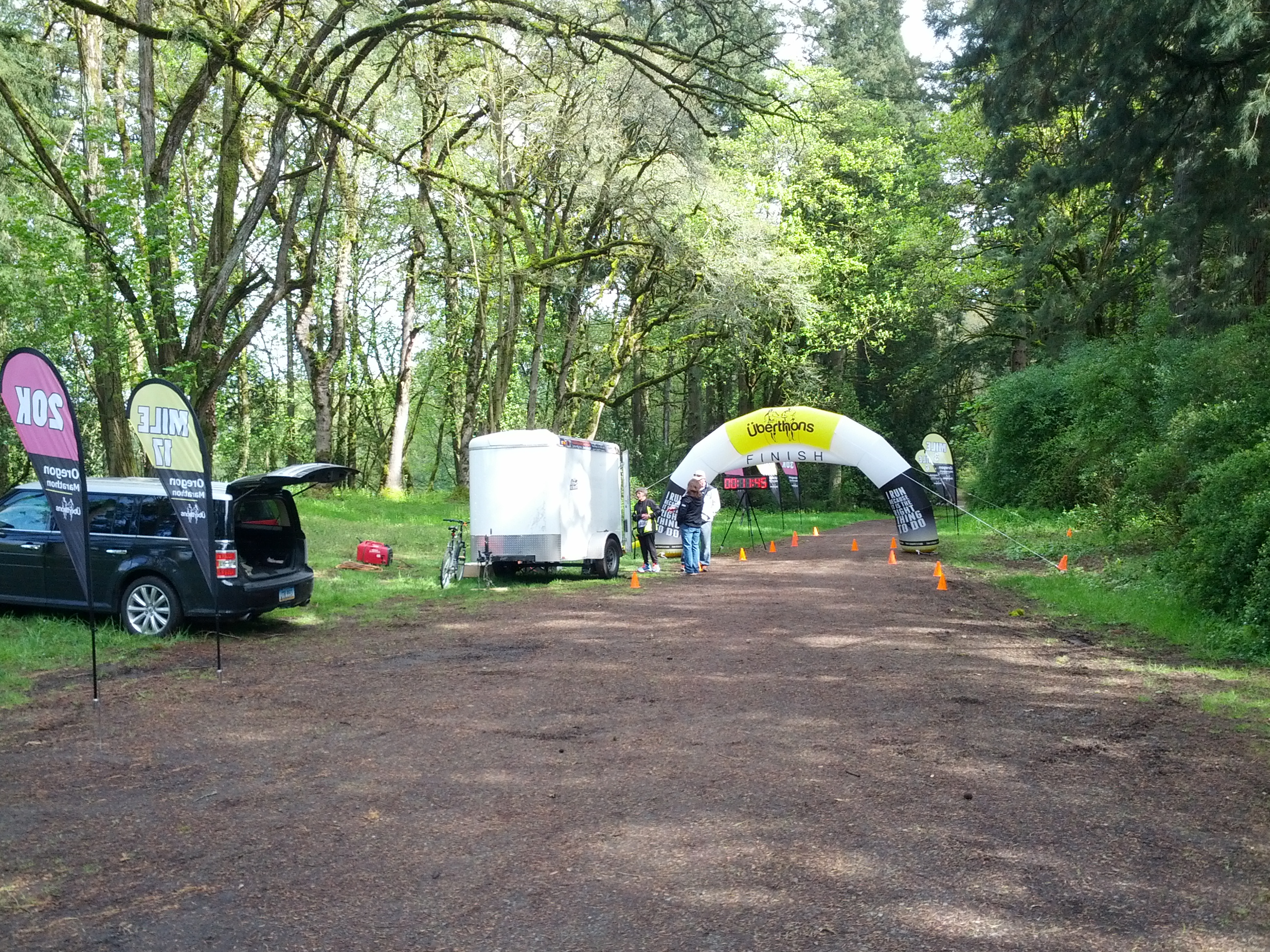 I've mentioned before how Oregon's weather can be fickle. But that was in the context of how it could be sunny and mild one day, and blustery and freezing the next day. Saturday, April 19, was a different kind of fickle, more like, "Don't like the weather in Oregon? Just wait 5 minutes." During my drive from Portland down to Champoeg Park for the Scholarship Run 5K, it started off dry (after having rained steadily around the noon hour) and then turned into a serious downpour. D'oh, I thought to myself. I had forgotten to bring a ziplock bag to protect my smartphone. Because I haven't (yet) shelled out for a GPS watch, I use RunKeeper not just to track the run, but to get real-time data about time, distance, and average pace. I resigned myself to relying just on my digital (non-GPS) watch and the mile markers. However, by the time I arrived at Champoeg Park, about twenty minutes before race time, the skies cleared, and I left my rain jacket in my vehicle. My 10-year-old son and I headed over to the main staging area to pick up our race bibs. That's when I discovered something new: paper-thin RFID chips! (This may not sound like a big deal, but my running nerdiness compels me to keep all of my racing bibs in plastic sheet protectors in a binder. The typical RFID chip on the back of a racing bib is protected by a half-inch thick chunk of styrofoam, which causes the protector sheets to jut out in the middle. My unwieldy solution has been to rip the RFID chip off each bib. With this newfangled paper-thin RFID chip, though, I don't need to do anything. Yea!)

This race was billed as a scholarship fundraiser for local high school seniors, who were invited to apply by, among other things, writing an essay on the topic “How I can help others stay physically fit for a lifetime.” With the hundred or so runners gathered just behind the start line, race director Darwin Rasmussen announced the scholarship winners ($250 each) and runners up ($25 each):

There were also shout-outs to the eldest runner in the field (Carol Craig) and to Andie Proskus, the very inspirational runner who, despite suffering from the muscular-degenerative disease myopathy, continues to complete 5K and 10K races. Race director Randy Wilder then offered a helpful bit of advice, telling us that on our return, we might think the last stretch is uphill, but it only looks that way. Ha ha ha!

Then we got a short countdown, and the race began. That beginning stretch — aka the end stretch on our return — wasn’t steep, but it was a 60 feet descent over about half a mile. Not long after the start, I settled into sixth place overall, behind four men and one woman. As for my son, I — er — let him run at his own pace.

Also, my left shoelace came undone. 5K is a short enough race distance that I actually thought about leaving it that way; it’s a tight enough fit that I didn’t really think it would come off over the remaining 2.5 miles. But I stopped to tie it, and was momentarily passed.

Screenshot of RunKeeper’s map of the Scholarship Run race course

Most of the race course was on the walking/biking path in the park, parallel to the main road. We ran past the frisbee golf course and then around the 1.25 mile mark, crossed the road. Randy Wilder was stationed there and greeted me as I went by.

“Watch for my kid!” I yelled back.

The race course turned deeper into the park for a short out-and-back. The aid station was located here, so it was available twice to runners.

I was just under 10 minutes at the 1.5 mile mark, so I figured a sub-21 minute finish was possible if I didn’t fade too much in the second half of the race.

Heading back now, I saw my son going the opposite way, so I cheered him on and took some parental pride in how he looked to be doing pretty well.

Somewhere around the 2 mile mark, I passed one of the guys who had been ahead of me from the start, so I was now in fifth place. Two of the guys ahead of me were WAY ahead of me, but the woman was within striking distance. I was easing up on my pace for a bit, intending to crank it up for the last half mile or so, but I appeared to be gaining ground slowly but steadily.

Around this stretch, I saw Andie Proskus cheerfully moving along, accompanied by a videographer. I gave her a thumbs up and told her she was awesome.

At the 3 mile mark, I was maybe six feet behind the eventual female winner, Eliza Smith. Keep in mind, this part was, despite Randy Wilder’s “there is no spoon” message, sloped uphill and unpaved at that. I kicked into overdrive to exhaust everything I had left in the tank. Side note: if you are looking to improve your end-of-race kick, try interval training and squats/deadlifts.

Uberthons announcer Kelly Marker saw me trying to pass Ms. Smith and shouted excitedly, “Oh, we’ve got a race to the finish!!!” Any hopes that I might have had about sneaking past Ms. Smith were dashed, and if I wanted fourth place, I was going to have to earn it. That last little bit of a 5K — as in, the part after 3 miles — isn’t really that long, but it sure feels like it when you’re trying to get under a time goal or to beat someone to the finish.

Running uphill is, as Olympic marathon champion Frank Shorter explained, basically strength training in disguise. Since I live in one of the hilly parts of the Portland area, if I run outside, I get lots of hill training whether I want it or not, so perhaps that uphill ending helped me, as I finished just a few steps ahead.

She came over to high five me, and I in turn congratulated her for, it appeared, being the fastest woman in the race, which would net her the prize of a $60 gift card to Road Runner Sports. (The male winner, Adam Diverglio, also won a $60 gift card.) Then I cheered more of the finishers coming through, while waiting for my son.

There were quite a few kids from 5 to 14 years old at this race — 12, out of a total of 97 runners. The fastest one was a 12 year old who clocked in at an impressive 24:08, for a sub-8:00 minute pace. I cheered when I saw my son, and it was pretty cool to be there to congratulate him when he finished. (He’s run a couple of 5Ks before, but each of those times, I ran the 10K, so he finished those races before I finished mine.) He collected a bottle of water and the race medal, and then we wandered over to the post-race spread of fruit, chips, and hot dogs.

Uberthons is usually quite precise in the measurement of race distances, but as you can see in the RunKeeper screen capture, this route looks like it was a bit long at 3.18 miles. Friend and fellow Uberthoner Eileen Kuffner also had it measured at 3.18 miles. So, hey, we all ran slightly faster paces than is indicated on the results page!

Speaking of the finisher’s medal, here it is. It’s shaped like the NewYearathon and Luckython medals (and presumably the medals from the remaining Uberthons races this year). There’s a detachable pin; you can leave it pinned to the medal, or take it off to pin somewhere else.