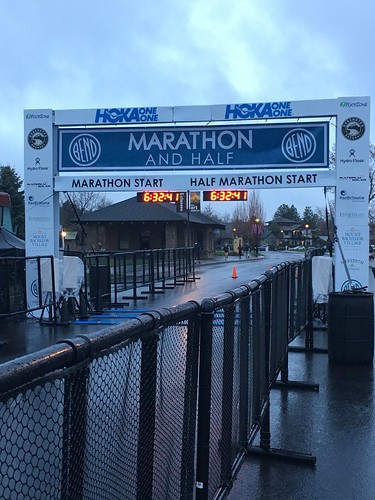 For my 13th marathon I decided I wanted to try somewhere new. Half of my marathons had been in Portland, with the others in Vancouver, Eugene, and Newport. It was time for a bigger road trip. And after heading so many great things about Bend, I figured I’d have a road trip, marathon, and adventure all in one jam-packed weekend. Bend Marathon, here I come.

I drove over to Bend on Friday, so that I could go to packet pick-up the day before the race. And to not be insane and drive three hours starting at 3 in the morning. The pick-up was at FootZone, a local running store that was packed with people shopping and getting their shirts and numbers. The race included a marathon, half marathon, 10K, and 5K, but didn’t have the big expo I was expecting. Thinking back afterward, it made sense considering this was only the fifth year of the event and there was new management in charge. After getting my number, I bought new socks and tank top for another day (because NOTHING NEW ON RACE DAY), and then headed out to wander downtown Bend and get dinner at Bend Brewery. I drove over to the starting line, to avoid early morning troubles, before heading to my Airbnb for (hopefully) an early night’s sleep.

The weather predictions for race day had been changing a lot the week before so I’d packed half my running gear for this adventure. When I woke up to a solid rain coming down outside, I decided on a rain jacket, tank top, and tights. I tucked my phone into a plastic bag and hoped for the best. I was going to need those tunes to keep me going over all those hills. The elevation map said we were headed for 1,236 feet of elevation change along the course, with most of it being uphill the first 17 miles and then primarily being downhill the last 9. (Spoiler alert: Somehow downhill still feels uphill near the end of a marathon). 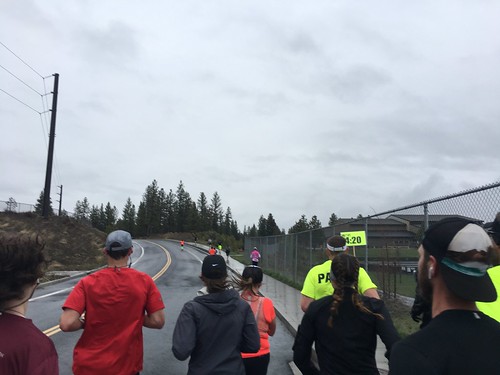 Arriving at the starting line, I was grateful for the covered area at the amphitheater to walk under and stretch while waiting to start. The marathoners were the first group to go, and with less than 300 of us, it was a pretty chill send-off. With a blow of a horn, we were off into the rainy morning.

My goal for the race was to stick with the 4:20 pacer as long as I could. My PR is 4:36.59; I didn’t feel ready for a 4:20 in this race but some recent runs have me believing it’s in my future. Figured I’d see how far I could go. About 20 others had some kind of similar hope so we were quite the group coming down the road. When we reached the first aid station, around Mile 5, we overwhelmed the volunteers with so many needing water or electrolytes. I grabbed a cup and a piece of banana, then speeded along to not lose the group. I managed to stick with the 4:20 pacer until Mile 9, then I had to slow down a bit. It was either slow down a little then or possibly burn out later on.

Running in a completely new (to me) city was quite an adventure. The first 11 miles felt like a long neighborhood run. We passed multiple schools and cute homes sometimes had folks out front cheering us on. The course also went through some new construction areas where homes were being built for the growing city. After mile 13, there was a lovely downhill that ended in trouble. Half marathon runners were coming from the right and headed toward our left. But there was no sign or volunteer to say which way the marathon runners were supposed to go. Were we supposed to join these folks or loop back the way they came? About 10 other runners had caught up to me while I was confused on the corner. Luckily a nearby spectator said some previous runners had gone left with the flow of half marathoners. So, with a hope and a prayer, on we went. It was a huge relief to see the Mile 14 sign a little while later.

Unfortunately that was the last mileage sign we would see until Mile 20. Miles 14 to 20 was an out-and-back section on a paved pathway through some woods. As a Portland runner, I was reminded of Springwater. I’m not sure if someone forgot to put out these signs, or if they were hidden behind trees, but I spent the next hour knowing I was on the right course, but not knowing exactly where I was on that course.

The other big adventure of this event was Miles 22 to 24, when my road race went off-road. This time our out-and-back was trail running, with some steep inclines that I needed to walk up and some rocks that caused my tired legs trouble. Maybe next year the course can shift so that trail portion is earlier in the event…or not included at all (though I would miss it). It was a beautiful area that I’d love to run or walk in the future, but just maybe not after 22 miles for a girl like me. 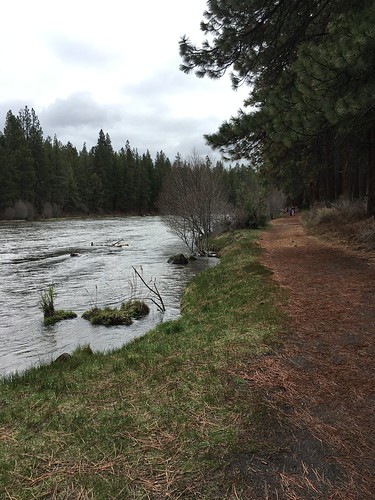 Back onto the roads, the last two miles were alongside a river that cuts through Bend. I ran past folks enjoying a Saturday morning stroll and others having an early lunch. Arrows pointing ahead kept me moving forward as I kept hoping that the next riverbend would bring me to the bridge I’d cross to our finish line. The ending of the race actually came up suddenly as the arch could not be seen very far in advance. With a final sprint, I cross the finish line just a few seconds slower than my PR. I was exhausted, wet, and feeling proud of a strong race in such hilly conditions.

I went off in search of my medal (they were handed out in the party area rather than at the finish line). The after-race food was amazing: burritos, chips, cookies, Krispy Kreme, soda, licorice, M&M’s, and of course local beers. I took most of my snacks to go because I was craving dry clothes more than anything else. After a shower and a nap, I’d get back out into the city for dinner at Deschutes Brewery and all the fries I could eat. 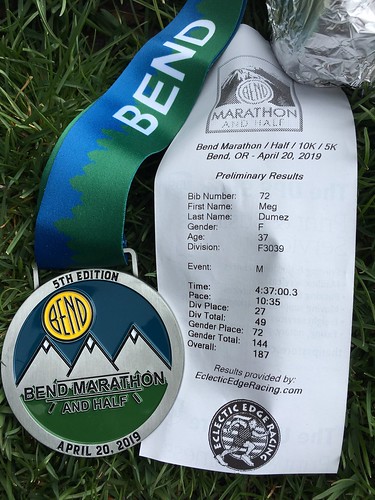