The ORCC Hagg Lake Mud Runs were recently held on Saturday, February 18th and Sunday, February 17th, 2019. Two Run Oregon bloggers participated in the final 25k event in this series of races around Henry Hagg Lake that include a 50K, 25K+, and a 25K that can be run as a single event or doubled up for a race growler full of local libations. Read about their experiences below. 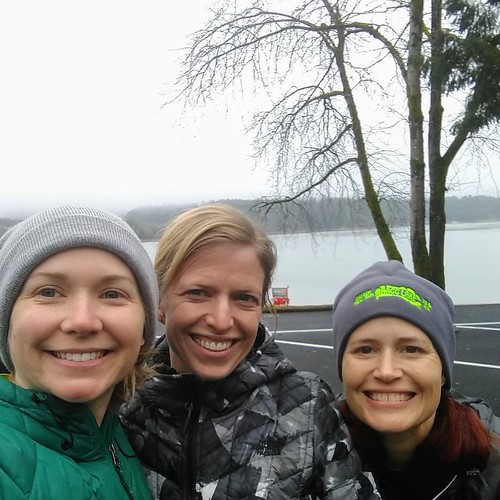 Robyn, Katie, and Nikki before the race

Robyn’s Thoughts: This race was like nothing I have ever done before. I thought I was prepared. I thought I was in shape. I thought I had the mental toughness to get me through almost anything. After all, it was “only 15 miles”. I had done almost 19 a few weeks before, and my weekly mileage had been at an impressive number lately. But as most of us know, running teaches us many things, including how to be humble.

The day started off like any other race, shoving gels into my hydration pack, trying to eat before I was hungry, and trying my best to temper the pre-race jitters that inevitably course through my veins. One atypical activity in my preparations was trying to create ankle gaiters from duct tape and old socks. I had heard the Hagg Lake Mud Run would be muddy. It is in the name, after all. I thought I could mitigate some of the soggy challenges I would encounter on these trails. But as it turns out, Henry Hagg Lake showed me how wrong I was, on multiple accounts.

As we reached the start of the race, we peeled off warmer layers, hoping to get to that perfect combination of gear that would get us to the finish line the most comfortably. But comfort wasn’t in the cards this day.

The course started innocently enough, with a few loops around a parking lot, and an out-and-back on the road, which I understood was getting us to that perfect 25k distance. At about mile two, you took a sharp left into what is affectionately known as “the pig pen“. There I was introduced to the mud. As I jumped from side to side trying to move in a forward direction, other runners yelled to me “the trough is your friend”, and “stop fighting it, it’s only going to get worse”. But there was something so ingrained in me; I couldn’t stop attempting to keep my shoes clean, attempting to find solid ground, even if it meant running into the blackberry brambles. I was tired, I was over the mud, I was cold and hungry. I looked down at my watch… 3.5 miles. This was going to be not a race of the body, but one of the mind. I was not prepared for what Hagg Lake had for me: hours of sliding, barely recovering, brief respites of asphalt or solid trail. I was most unprepared for how I would feel inside my own head. Throughout the entire ordeal… I mean race… I kept telling myself, “this is why you are here”, to do something unexpected, to meet like-minded (crazy) individuals in attempting to do something outside of your comfort zone. I kept telling myself that this would help me become mentally tough for my longer races planned for the summer. The lessons I took away from this event far outweighed my finishing time or my age group placement. Hagg Lake reminded me that mental toughness and agility are just as important as foot speed and endurance. When you think you know something about your running abilities, a special event, put on by an incredible organization, teaches you things you didn’t even know were necessary knowledge. 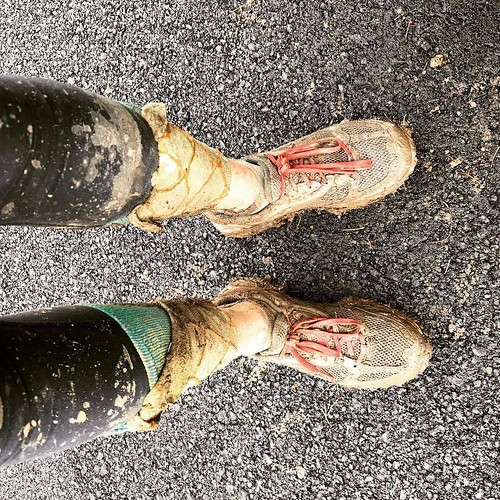 I did finish the race,. Often times that is not something I would report, “just” finishing. The Hagg Lake Mud Run reminded me of the importance of cross training in my running endeavors, the importance of understanding the race in which you are attempting, and that enjoying the ride and learning something new about yourself is the whole point after all!

Nikki’s Thoughts: I echo Robyn’s sentiments in that running a race like Hagg is humbling. Like Robyn, I’ve been doing a lot of double digit mileage recently. I’m training for three ultras this year and was looking at Hagg as a “training run.” I had underestimated what 15 miles on the muddy trails in February would really look like. More importantly, I had forgotten what it would feel like.

Before I get into the meat of the actual run, let me explain the things about this run that are totally awesome. The first thing is, despite the mud and grit and dark skies of February, Hagg Lake is beautiful. There’s no denying that the peace of the woods, the lush green trees, and the pretty lake itself are a great backdrop to any race. The terrain is not overly hilly, there’s not a ton of elevation to worry about, and in many regards, it’s not a difficult trail to overcome at other times of the year. Another thing that should be mentioned is that the ORRC does a fabulous job marking the trail. Even someone like me, who has gotten lost in neighborhoods far too close to her own house to want to admit to, will not get lost on this course. The aid stations are well stocked with typical Ultra food, which is amazing for “only” a 25k. PB&J, trail mix, cookies, fruit, and even pickles (yah salt!!) are available and being served by some of the nicest volunteers you could ask for. The swag is great for this race too. Shirts are optional for a fee (and some of us have more shirts than we know what to do with) and you’ll get free socks, which is something I’ll actually use. We also got cool new bags with the Hagg logo on them and a post-race party with delicious hot soup and grilled cheese bites available as well as beer. There were also heat lamps under the race canopies.

I also love that this race aims to waste as little as possible. It’s a cupless event, which is a huge waste saver, and at the end of this year’s race there was less than a pound of garbage. That’s a huge accomplishment and I wish more races could follow that footprint.

As for the course, I’m not going to lie. It was tough. I had originally considered doing the 50k but in the end I was really glad that I changed my mind. Doing two loops in the mud would have been very challenging, not only physically but mentally. I was told that the 25k terrain was a bit more challenging in the opposite direction of the 50k the day before. All that mud was kicked up twice the day before, which made it all the more muddy for us following with the 25k . 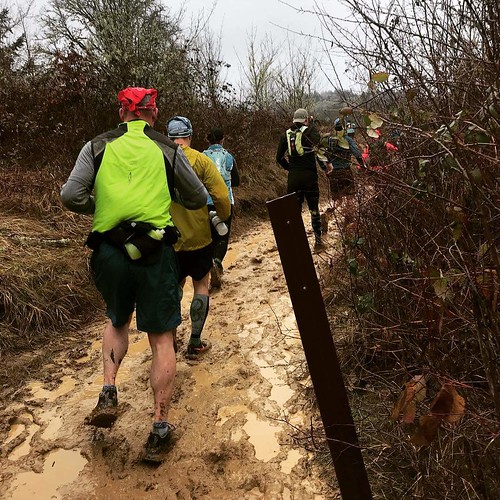 The 25k was hard on my body, more than I thought it would be. Just trying to stay upright used my muscles in ways I wasn’t used to. There were sections that I literally got on all fours to climb, sometimes sliding back down to where I’d started. And the downhills were just as challenging, as stopping was a difficult task that sometimes required me slamming into trees like I used to slam into walls when I was learning to roller skate as a kid. I fell a few times but I could always get back up in the slip and slide of mud. There were sections of mud puddles that were ankle or knee deep and I constantly had pools of water in my shoes. I couldn’t run in straight lines and often wasn’t sure where to step for the best footing. When it was all over, it was difficult to peel all the layers of clothes off with frozen fingers and I think I still have dirt under my fingernails and between my toes.

Mentally, I had a different experience than Robyn had, but I think the thing that saved me was that I opted to run the entire thing with my friend Katie. I didn’t want to race that day, I just wanted to have fun. I didn’t care how long it took, as long as I finished. That was the goal of the day, and that’s what I did, so I felt successful in the end. 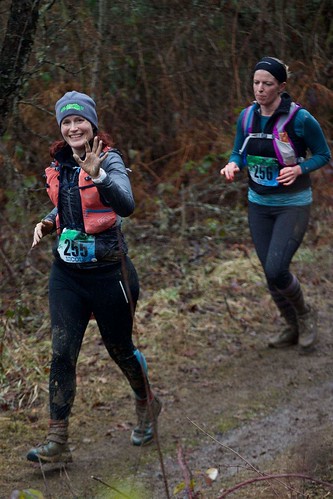 Running in the mud is more fun with friends

I used to care more about finish times and speed, but as I’ve started tackling more ultra races, I’m finding a shift in my perspective. It’s no longer about times I can brag about. It’s about the journey and carving out memories that I plan to carry on in my later years and tell my grandchildren about. I think that’s what’s going to live on long after the dirt has been washed away.

I underestimated this race by a long shot. I was sore for a few days afterwards, which is not my experience with many other races. I no longer consider it “just a training run.” This is a challenge in it’s own right, though it was one I really enjoyed and will look back on and smile.