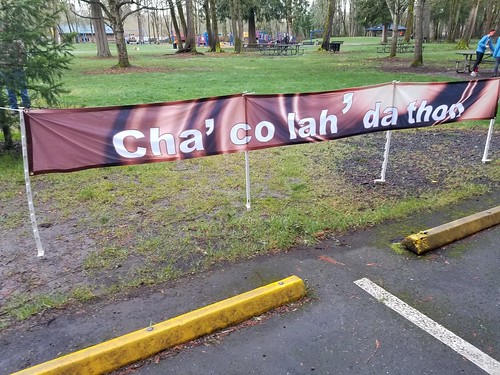 No confusion about what race this is (photo by Tung Yin)

After a relatively warm winter through January, it wasn’t unreasonable to think that maybe this would be another snow-less year in Portland. But then there was that crazy start to February, when the weather forecast called for serious snow accumulation, leading to frenzied shopping for emergency supplies. For much of the city — certainly on the west side — the snowstorm fizzled.

Which was just as well, because sticking snow on the ground might have prevented the 2019 edition of the Chocolatathon from taking place. For those who aren’t familiar with the Uberthons event, it is what it sounds like: a 5K/10K race with post-race chocolate treats for finishers.

Race day was a pretty normal Oregon mid-winter morning: on the cold side of cool, cloudy, and hints of mist in the air. Although Uberthons has used The Reserve Vineyards and Golf Course for many of its late fall through early spring races, the Chocolatathon has always been staged at Cook Park in Tigard. Cook Park is a great venue for a race: there is plenty of parking, it has real bathrooms, the covered area near the kids’ playground provides pre- and post-race shelter if needed, and the scenery is pretty interesting.

As it turned out, on this occasion, one of those things was missing — namely, the ample parking. Because of park maintenance and other construction, much of the parking lot was closed off. Uberthons had warned participants ahead of time to expect to park by Tigard High School and walk down the short hill to the park.

Around 8:35 am (or 10 minutes before race time), race announcer Margo Glass called for runners to start lining up. Normally, it takes a while for everyone to get ready, but on this day, we were so punctual that Margo said she needed to come up trivial questions while we waited for the race to start. Riffing off the fact that the next Uberthons race (the Spring Event) would take place in/near Butteville, runner Ross Crowley told several of us near the front of the line that large parts of Butteville were flooded a long time ago and ended moving to what is now Tigard, which is why Tigard is sometimes known as “East Butte.” 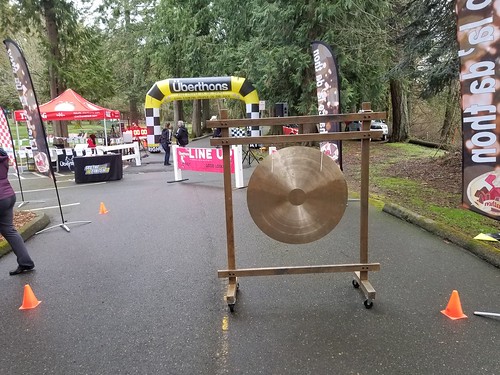 Do we have to bang the gong before we start the race? (photo by Tung Yin)

The Cook Park race course used by Uberthons starts near the covered area by the playgrounds and heads in a western direction toward the railroad tracks, and then heads south into the Tualatin Community Park, before reversing course and taking runners into Durham Park, where there is another loop with a short, steep little hill at the farthest point. With this many out and backs, you’re constantly seeing runners on the other side of the path.

I’m a bit detrained, or de-intensified, or de-somethinged, so I started to slow down in mile 2, and mile 1 wasn’t all that great either. The midpoint of the race was just as we headed into Durham Park, and somewhere there, fellow Run Oregon blogger Julie Mullins caught up to me. Julie is a formidable runner and logs a ton of miles, so I figured it would be a good challenge to try to get back and stay ahead of her. (Or, as she put it later when we were chatting after the race, she thought I was thinking, “nope, not going to let you finish ahead of me.”) That little hill at the race apogee ended up giving me a nice boost, as I passed a couple of other runners going up, and managed to turn in a better effort in mile 3 than in mile 2. 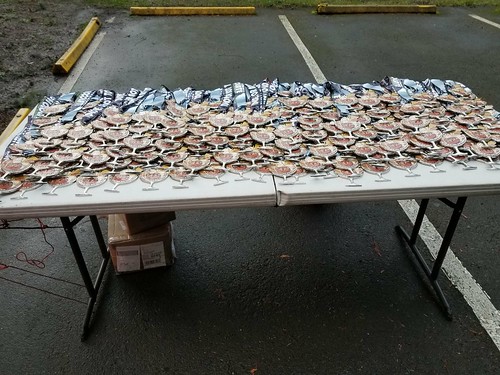 All those finishers’ medals! (photo by Tung Yin)

Not only were there the usual giant finishers’ medals, plus separate winner medals (1st/2d/3d) for overall, masters, and seniors runners, and age group winner pins (1st/2d/3d), there were chocolate treats ranging from chocolate chip pancakes to chocolate cheesecake, and as a new perk, Jersey Mike’s sandwiches! (There used to be a Jersey Mike’s near me, but it closed….bummer.) 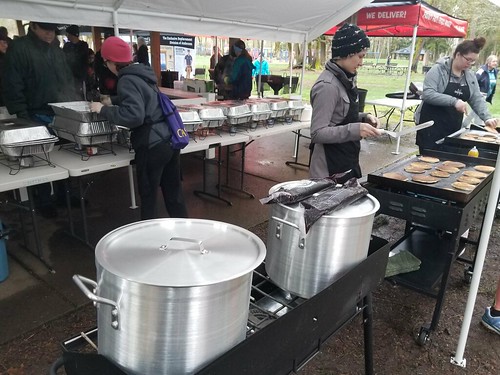 Did someone order chocolate chip pancakes? (photo by Tung Yin)

All in all, this was another top notch event by Uberthons. I say this even though chocolate is just okay for me — I’d say that my ranking of the top post-race food provided by Uberthons goes grilled burgers #1 (Summer Event), Qdoba #2 (Spring and Fall Events, usually), and clam chowder #3 (Winter Event). I mean, it’s all good, but I’ll run extra for those burgers….

Full race results for 5K and 10K can be found here.

The next Uberthons race is the Spring Half Marathon/Quarter Marathon/5K.