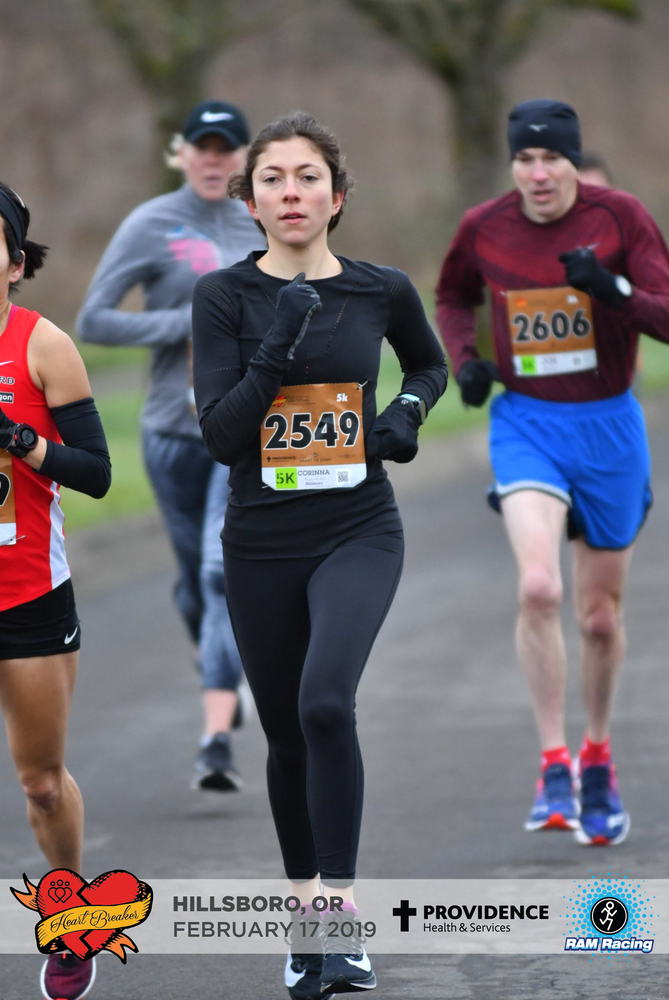 Women’s winner Corinna Jackson leads a pack near the start of the Heart Breaker 5K.

It had been several years since I last ran the Heart Breaker Half (or 10k or 5k). In fact, it had been so long that when I last ran it, the race was still held in downtown Portland. So I figured it was high time I ran it again, especially since Liberty High School is such a good location for a race (I have run the Falcon 15K Relay a couple times there). The high school is conveniently located just off Hwy. 26, and easy to find.

Although there is lots of parking in two lots at the school, by the time I arrived for the 5K (which started the latest of the three distances) those lots were full, and I headed to an industrial park across the street, where several other runners were already parking. Unfortunately, this wasn’t official overflow parking, as I overheard a woman informing people that it was a private lot, and she wasn’t aware of the event happening across the street. In the future, some signage indicating those lots were off-limits or communication between the race organizers and adjacent businesses would be a good idea to eliminate any misunderstandings. And who knows, maybe those businesses would be welcoming to runners if they were aware of the event in advance.

Having picked up my race packet at the Foot Traffic race expo on Saturday, I was able to simply pin on my number and head out to warm up around the high school field and nearby streets. However, as race time approached I found it strange that aside from lots of activity at the start and finish areas, I didn’t see any of the other normal signs (literally) of race amenities, like bag check. And it was chilly, so I still had running pants and a jacket to drop off! I finally asked the friendly high school crew volunteering at the finish line, and they directed me to the other side of the building. Once inside the cafeteria, I found everything was well-organized and staffed with helpful volunteers, not to mention it was warm! But a few signs placed outside, or even some colorful balloons on the sidewalk near the entrance would have made a huge difference in guiding people inside and creating excitement about the event. As it was, it seemed a little like a ghost town outside the building.

However, after dropping off my warm clothes and heading back out, the 5k start area next to the field was bustling with activity as runners warmed up and stretched, and “Irrepressible” Greg Pressler kept us entertained with his humor and pre-race instructions and information. While it was cold, the weather gods were merciful and it was dry with very little wind. Perfect racing conditions. Finally it was time to line up, and the runners efficiently heeded Greg’s advice about seeding ourselves according to expected pace. He counted down from 10, with a few foreign numbers thrown in to keep things interesting, and we were off!

While the majority of the course was great, well-marked, and on wide paved roads, there was a bit of a potential bottleneck, tripping hazard, and obstacle right at the start, when we ran over a curb, up a short grassy slope and through a narrow gate, before emerging onto the road. I had noticed this before the race, and was prepared to carefully maneuver my way through the gate before opening up my stride on the road, but at least one runner almost turned too soon before barely avoiding running into the fence. The overall course was very nice, and we got to finish on the track which is always fun, but heading out and coming back through that gate was a little tricky. 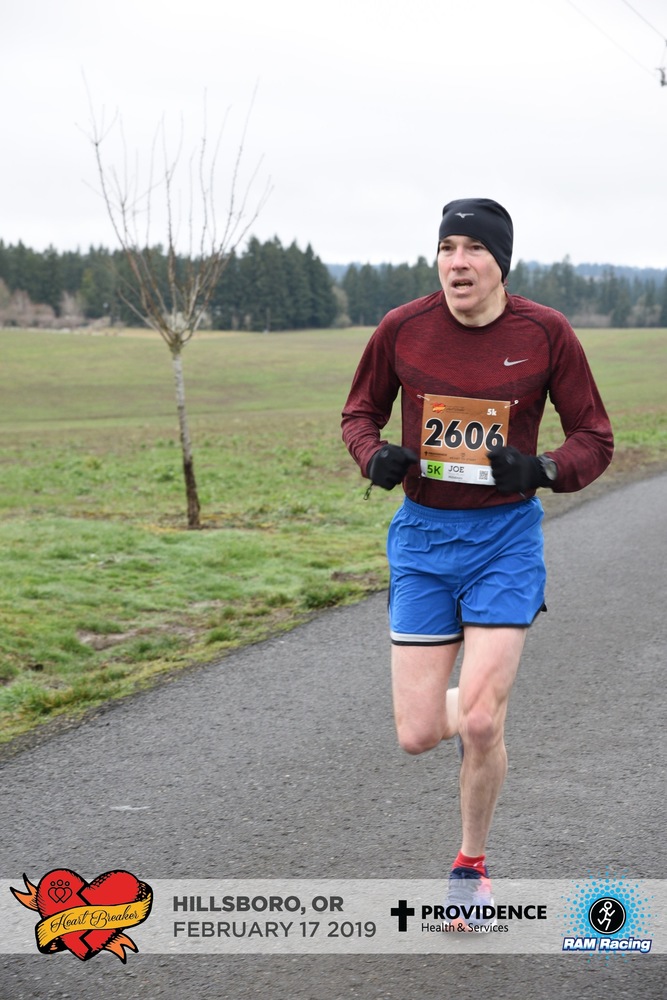 The Heart Breaker 5K course led runners on a scenic tour of the open areas outside of Hillsboro.

But everything else about the 5k course was excellent. We had a lead cyclist (although the 16-year-old who won the race opened up such an immediate huge gap that the bike soon disappeared into the distance!) Cones lined the entire course, so there was really no way to get lost. The roads were wide and largely free of traffic, with a few noticeable rolling hills to keep it interesting and slightly challenging. The lead cyclist stopped and cheered us on at the turnaround, no longer required, since it was a complete out-and-back (except for continuing past the start a short distance to finish on the track.)

As for my race, once past the hazards of the narrow gate, I settled into a comfortable pace, letting some speedsters take off ahead of me. Luckily, I had dressed perfectly for the conditions and felt reasonably strong. After about a mile, with the turnaround visible in the distance, the course headed down a long, gradual hill, and I braced myself mentally for the return trip and the climb back up. I maintained a solid pace and gradually gained on and passed a couple people just before the turnaround, then began the surge for the finish, gaining energy from other runners as they came by on their way out.

I tried to concentrate on staying strong on the uphills, and gained slightly on the next couple runners, finally passing them with about a half-mile to go. I made the last major turn before the gate, with a false memory of there only being about a block left to go before the school. Alas, it was more like three blocks, and slightly uphill, but I brushed my chagrin aside and doubled down on my effort, knowing I was still close enough to the finish to hang on to my current pace, and maybe put on a semblance of a kick.

I carefully negotiated the gate, aimed myself down the path toward the track, and acknowledged encouragement from fellow Run Oregon blogger Brian Bernier, who had just won the 10k. I hit the track and pushed hard toward the finish, staggering across the line pleased with my effort and a decent time and place given my current training. (It’s always fun to finish a race on a track, so the gate was a small price to pay.)

Back at the cafeteria, helpful volunteers quickly retrieved my warm clothes, and pointed me toward the Dole fruit cups, sweet rolls and Danishes, and candy hearts (a rarity, since they weren’t sold this year!) at the other end of the room. The tables were decked out with festive white and red table cloths and a huge balloon heart hung from the ceiling. A large percentage of the participants were sporting red “Heart to Start” shirts, representing Providence’s 5k training group, and I overheard two women saying this was their first 5k. Kudos to them!

Before too long, volunteers set up a microphone and dais, and Pressler appeared again to announce the awards. The atmosphere was a happy one, as runners and walkers of all paces and experience levels seemed to be enjoying themselves.

Not long after I got home that day the results and free race photos were already available online. The Heart Breaker is a very well-organized, fun, and jovial event. It won’t be as long a gap until my next Heart Breaker race.

Results for all three distances can be found HERE.