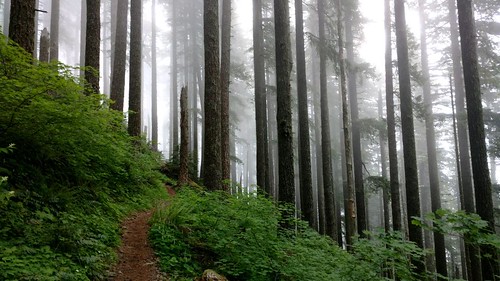 One of my friends looks like a gazelle when she runs. She’s got long, athletic legs and as far as I’m concerned, she’s the true definition of a natural born runner. It’s hard not to be jealous of these people when you are the type of runner that I am. I feel like I will always have to work twice as hard to be half the runner my friend is.

When I first started running, it wasn’t about my time, my pace, or where I finished in comparison to other runners in races. It was just about completing the race and having a good time. But as I got stronger and fitter, I pushed harder, got faster, and found myself placing in my age division in races. This was a new experience for me and it became like a drug. It made me want to push even harder, to really get out there and kill myself trying to find that finish line. And sometimes that served me well and I could celebrate a victory at the end. Other times, it didn’t and I was left wondering what I could have done differently to do better. 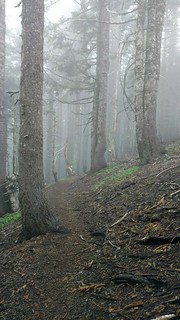 Maybe I felt like I had more to prove because it didn’t come easy to me like it did for other people. I knew I could never beat all the fast people but I wanted to at least run behind them in their shadows. I went from being someone who had never cared about the numbers to someone who was a bit obsessed with them. And no matter how well I did, I always felt like it wasn’t enough, that I could’ve pushed further, beat one more person, or come in a little faster. Somewhere along the line, I lost the love of the course that had motivated me to run in the first place. The stress was heavy on my body while I ran and it was silly because it was all self-imposed. No one else cared how fast I was and honestly it didn’t really matter. When I finished my last marathon 2 minutes slower than my goal, I was so disheartened and disappointed in myself that it didn’t even matter that I’d just completed a marathon, which should be reason for celebration. So it was then that I realized something. Not only was it petty to care about a pretty decent finish time for the average runner, but it wasn’t really fair to complain about it. For all the people that were faster than me, there were plenty that were slower than me too, and it was disrespectful of me to whine. And it really wasn’t worth getting upset about in the first place .. First world problems.

And then I decided it was time to do an ultra. When I finally found the courage to sign up for one, everything changed. People thought I was crazy, taking on a longer distance than I’d ever run when everything else in my life was telling me I needed a break from running. Why take on more when I already had taken on so much? But doing an ultra took me back to my roots, back to when it was about the act of running and not about the speed of my legs.

I’m not the picture of your typical ultra runner, but I’ll fake it as long as I can.

I had no idea how to train for an ultra, so I pieced together my own plan with a few different ones I’d found and borrowed. And then, I didn’t follow it. In fact, I barely looked at it.  I had always been good about having the miles marked down on a calendar and sticking to it, but I just couldn’t this time. Coming off that recent disappointing marathon and facing all those miles in my future was more than I was willing to consider facing. So I decided to “just run” and do what I could and when I could. Whenever possible, I started following up long run days with another long run the next day, and I slowed my body down as much as I could. I knew that getting through an ultra was going to be about being out there and going forever, not about finishing as quickly as I could. And somehow, that wasn’t a terrible thing. In fact, it made me sigh with relief. I didn’t set out for specific numbers for miles and I did as many hills and trails as I could. I found the trails to be such a fabulous gift. I am the type who hates getting lost and I panic when I don’t know where I am, but I decided to just BREATHE and let myself get off the beaten path, explore, and enjoy the trees, the views, and the power in my legs. I lived in the moment and it made me feel lighter on my feet than I’d ever felt.

I’m not going to lie, I was terrified on race day. I wasn’t sure I’d be ready to tackle this new adventure. I’d never felt more unprepared for a race. But somehow, there was still a calm in me that I had never had experienced before. I had a mental headspace that told me that I was just going out to trek through some beautiful forests and see some epic views and I could hike the whole thing if I needed to.

I started out slow and didn’t worry about time. I walked up the hills and there were a lot of them. My watch quit at mile 20 and I was initially upset by that, but I eventually saw that to be a good thing. There was no countdown, no yard stick to measure against. I felt great through the entire race. I never felt like I couldn’t do it. And when I finished it was an amazing accomplishment that had nothing to do with my finish time. 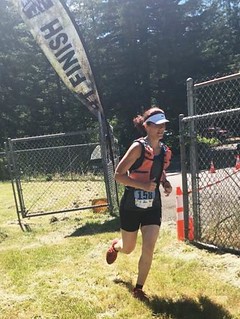 Ultras are the distance you run when you learn to get over yourself. They aren’t about speed because they can’t be. You can be a fast runner and do ultras. Really fast, in fact. But unless you’re one of the truly elite and gifted runners of the world, you should plan on your pace slowing way down unless you want to hurt a lot at the end, or have to worry about maybe not even finishing at all. Take your marathon time and add at least an hour for a 50k, maybe even two or three. A 50 miler or a 100 miler? That could take all day AND all night. Why would anyone want to do that? Because that cliché about it being about the journey rather than the destination? It’s never been more true than when talking about an ultra.

I am 40 years old and have found myself in good company at ultra races. There aren’t quite as many 20-somethings milling around like at other more “standard” races. There is nothing wrong with being young, but there’s a wisdom in the older crowd. They know all about keeping their egos in check and just getting out there and having fun.  And when they take off at the gun, they don’t tend to shoot off like rockets. If they know what they are doing, they ease in. They also encourage other runners out there and here’s the thing .. they are genuine, (and dare I say, humble) about it. Everyone is out there to run their own race, not to beat everyone else. It’s not uncommon to see a fast ultra runner standing out there at the end, hours after they’ve finished, just to cheer other racers over their finish line as well.

Since running that first ultra (and yes, more are coming,) my pace has not improved. I am still training slow. I’m still just trying to breathe. And now it might take me all day to run a race, but at least I feel comfortable in my own skin doing it again. It took pushing my body to limits I didn’t know I had to prove to come full circle. And it’s a nice place I think I want to stay for awhile.