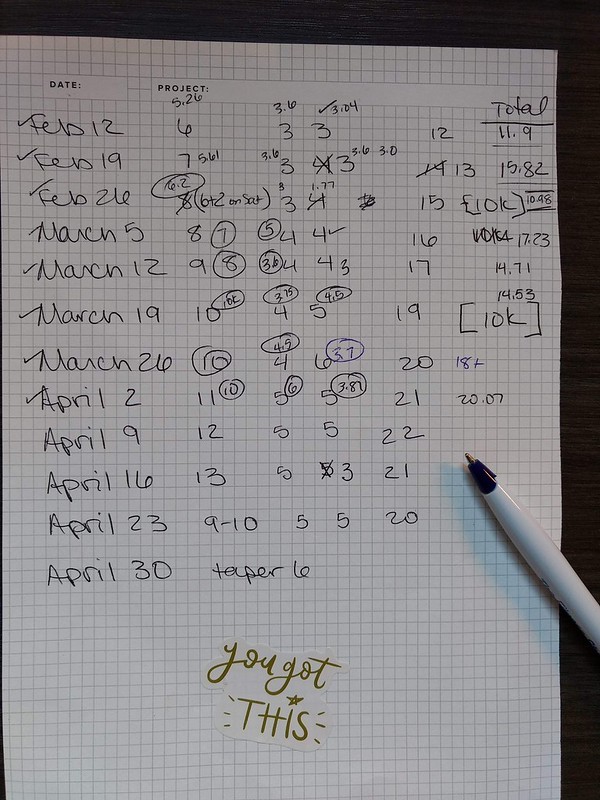 Annette’s very fluid training plan! (It looks like chaos, but it makes sense to me.)

Run Oregon bloggers Matt & Annette both recently signed up for the Willamette Valley Marathon & Half on May 6, 2018. This will be Matt’s third marathon and, though Annette has run 17 half marathons, the last one was way back in January of 2015. They got to talking about this race recently on the blog message board and realized they both have differing ways of training for racing. Here’s a little bit of their input from that conversation.

For someone who manages a running blog, you would think I would be more in tune with my running training and stats. I mean, I put in a pretty solid amount of miles each week and month, wear the latest running gear, and race all over the State, but overall I just sort of wing things most of the time. I have a general idea of what my PR’s are, but I couldn’t tell you off-hand what it is or even which race it was at. I don’t keep much track of my running stats aside from what ends up on Strava, and I also haven’t followed any race or speed training routines leading up to marathons or half marathons – I just sort of…run.

As someone who typically loves to make lists and track things, that fact that my running stats are surprisingly not one of those is pretty bewildering. You would think someone with slight OCD when it comes to organization, especially a person who spends his free time overseeing a running blog, would be all over it. I just am not and I really am not sure why.

I do have a theory though. Since Run Oregon is all-volunteer, we all have other jobs and responsibilities outside of our writing duties. My “real life” job is in a pretty stressful and emotional field and I truly believe that if it weren’t for running, I wouldn’t have lasted that long there. I use running to just disappear from “real life” for a bit – a time to tune out the stress and chaos by putting in miles on lunch break and thinking about…nothing. Additionally, I have three young children at home and a beautiful wife who works multiple evenings per week. That means our family schedule is all over the place and constantly in flux from one day to the next. Needless to say, if I have to choose between family time and running time – family is going to win every time.

I hypothesize that, subconsciously, my mind and body understand the good that running has provided and don’t want me to get to the place where running feels like a “chore” or an “expectation”. Essentially, if I make training a full focus, one of two things will happen:

As a result, I think I have learned over time what running is for me and how I am going to have to get through my training days. “Winging it” has gotten me through 2 marathons and 50 halves, so here’s hoping it works again!

I have always tracked my runs in a training journal and I have all of my races listed on a spreadsheet along with my stats for each event. In other words, I’m pretty much the opposite of Matt. And yet, despite my obsessive stat tracking, Matt, the guy who “just runs,” can outrun me any day. Go figure!

I used to run several half marathons a year until I was forced to take a little running break after my 2015 half marathon due to foot pain. After that, it seemed that every time I started running again, something interfered from a non-running injury to personal issues. I started running again multiple times, but it was typically only 1-2 times per week and usually only about 2-4 miles. When life started to settle down I kept trying to run more often or farther, but it was haphazard and frustrating. My running times were slower than ever and running had become a chore. I had to force myself out the door and it became easy to talk myself out of a run when the weather was bad, or I was tired, or whatever other excuse I came up with. Eventually I decided I didn’t have any excuse not to run a half marathon again. So, in January I chose the Willamette Valley Half Marathon because the course was fairly flat, it was in an area I was somewhat familiar with, and because I felt like I had enough time to train for a May half.

I chose a start date for my training and wrote up a training plan. Just looking at it freaked me out. I told my Saturday running partners my training start date. I also told several other people my plan. I figured if I told people it would be harder for me to bail. As my start date grew near I got really nervous! I had never been nervous about starting to train before, but it had been 3 years.  I was honestly afraid I was going to fail. But, the week of February 12 I started my training.

About a month into my training I finished an 8 mile run – a distance I hadn’t run in years – and it actually felt pretty decent. That’s when it hit me. I wasn’t coming up with excuses for not running anymore. Instead I was working around my schedule to make sure I could fit my running in. I was excited to get out the door and train. I had started to enjoy running again!

Why the change? Well, I’ve always been a goal-oriented person and after putting goal setting on hold for awhile, I found I was itching to set some goals again. Working towards a goal and achieving it gives me purpose and something to feel proud of myself about. After dealing with some personal issues that chipped away at my self-confidence, I realize that I needed something to focus on and help restore my confidence. Yes, I am more than my running, but training for an event is making me feel like me again.

While my half marathon isn’t going to be a PR by any means, it is a sort of running rebirth. I’ve been reminded of all the things I love about running, even though some runs may be rough. I feel like a runner again and I know I can run this half marathon in May. And, I already know I’ll be training for another event not long after I achieve this goal.