I registered for the Summerlake Loopy Half Marathon because I thought it would be an interesting change from the usual races. How true that was! Running a half marathon that was 14 loops around the park (the marathoners had 28 loops) had me a little nervous. I figured I would either love it or hate it. It turns out, I absolutely loved it! Summerlake Park is a small, but beautiful nature-filled park. The paved path meandered around the lake, over a few foot bridges, and even though we were on the sidewalk for a short stint – we were never far from shade trees and views of the lake.

Summerlake Loopy Marathon and Half Marathon was one in the series of the Firecracker Five races – which was 5 days in a row of marathons/half-marathons. There were only about 60 participants at this race, so the atmosphere was casual and comfortable – but well-organized. Before the start of the race a group photo was taken. Then there was a photo of those running the Firecracker Five. I was surprised that only a few of us stepped out when they took that photo. It was a decent sized group of people taking on that amazing challenge!

The start was a casual countdown that I almost missed, as I was off to the side messing around with my headphones. The group headed out with jokes and chatter. Part of the positive atmosphere of this race was due to the fact that the race director had made bibs with our names on them for us to put on our backs – to encourage some camaraderie out on the loop course. It was just seconds into the race when I noticed a name that I recognized from high school – in Idaho! I had a brief conversation with a fellow alum from Payette High School, who started out the race with her Starbucks in hand. How often does that happen? That encounter started me off with a smile.

The small group spread out quickly and I finally got my music going and settled in to my first loop. We had to navigate our way around a large group of geese who were blocking the path and had no intention of moving for a bunch of runners. In addition to the natural scenery of the park, the race director had made cards with a fun fact about each of the participants and had posted them along the course. It was a great distraction to find them and then try to read them as I passed by. Some of them were quite long and took multiple loops before I managed to read the entire thing. The loops went by quickly, as they were just under a mile. Even though we were being chip timed, I was worried about losing track of my laps, but with my Garmin as back up, I was able to keep track pretty easily. Focusing on how many loops I had done helped me focus less on mileage, which strangely, was a good distraction for me. 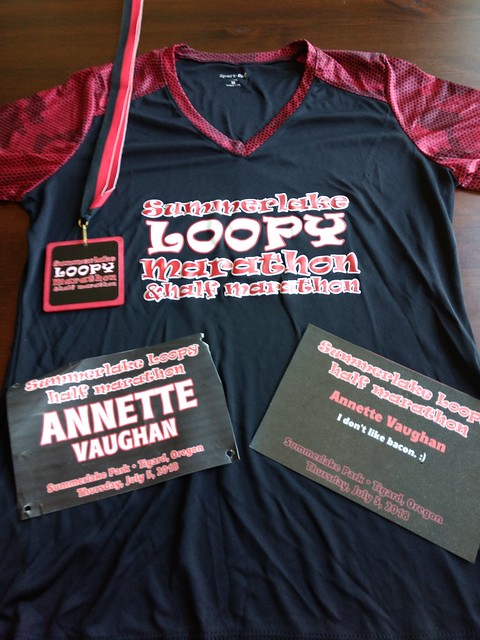 Having our names on our backs made for more interaction than your usual race. Runners would pass by and say things like, “Way to go, Annette!” It created such a positive race atmosphere when runners were encouraging each other by name. And, when you’re getting tired, encouraging someone else can be a great boost. I wasn’t as prepared for this race as I should have been, so it was more challenging as I neared the end. Despite the fact that my hip flexors were screaming, the positive words from others kept me from thinking about my fatigue. When I finished my half, it seemed that the finish came more quickly than at other events, even though this was my slowest time!

Though I was extremely tired afterwards, due to my lack of sufficient training, the atmosphere of this race left me with such a positive feeling. I truly enjoyed this half more than any other I have done. There is no question, I will run this one again! And, I’m looking forward to trying out some of the other 4th of July races in this series, as well. But, probably not all in a row!