Signing up for a race in March, you always risk running on a soggy day, but we were really lucky on the morning of this year’s Couve Clover Run in Vancouver, and although the day started with a slight drizzle, the clouds soon thinned and the sun almost broke through.

Parking was easy in downtown Vancouver, when I arrived near the start of the race, for which a whole two blocks were closed off on Main St between 8th and 10th Streets. Vendors had set up their tents on the street, and I sampled some coffee, nut bars, and juice, then found the packet pickup table inside Union Chapel. Since it was drizzling and cool outside, it was nice to have this inside space to get organized and even use the bathroom in the heated space. The line for the women’s bathroom was very long, but the luxury of having indoor facilities (in addition to a row of porta potties near the start line) was nice.

The race started in two waves. First, at 9am, the 10-mile and 7-mile runners were sent off to the sound of the bagpipe band and many cheers. Then minutes later, the 3-mile participants followed. This gap made it such that the first mile of the race was not too crowded, even in the middle of the pack where I tend to hang out. The course was straightforward and beautiful. The first mile was straight and flat along Officer’s Row in Fort Vancouver. The second mile was mostly down hill, past the historic Fort, and to the Columbia River. The final mile took us along the river front (where a lot of construction of future beautiful river access is taking place) and looped around the west side of downtown, past Ester Short Park and back to the Start/Finish line on Main St. Finishers were announced by name as they came down the final stretch towards the finish, which is a nice touch. 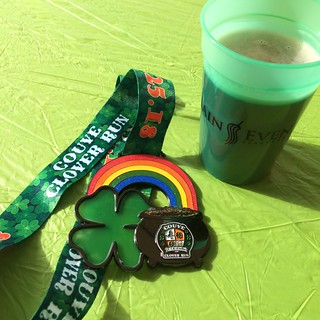 I received my gorgeous finisher’s medal and a bottle of water right after crossing the finish line. After catching my breath I enjoyed some cookies and juice, as well as a free beer in the beer garden. Hot soup was served inside Main Event Sports Grill, which was a great place to warm up. The downside of the indoor post-race venue was that I couldn’t hear race announcements anymore, nor cheer on those still finishing the race, so I ate my soup outside. The awards ceremony for the 3 mile run took place about an hour after the race start, and the awards for the longer distances would be held later on.

All in all this was a great race that I’ll consider again for next year. Having part of the pre- and post-race events happen indoors is great when there’s a really good chance that the weather will be cold and wet. The course was nice, well marked and well supported, and the block party that was the start/finish is hard to duplicate. Full results can be found here and free photos can be downloaded here.