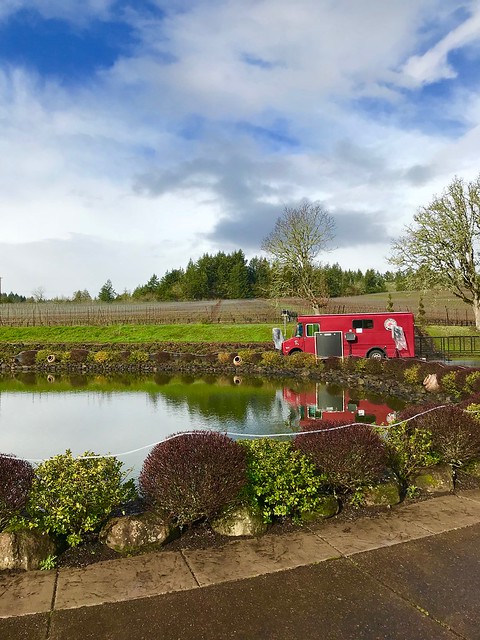 Looking out to the start line.

My wife called me from Atlanta on the morning of the 50th Annual Zena Road Runs. She had been checking her weather app and asked me if I was going to be running in the snow. I looked out our kitchen window at the partially overcast skies and said that blue skies were in the distance and that she should probably get a new app. However, as I headed from Salem over the bridge into Polk County and started heading into the Eola Hills area, some white stuff (that I was pretty unprepared for) made this race one to remember!

As this has been going on for the past 49 years, I am guessing that many readers out there have raced this at some point in the past. For those that haven’t, it has historically been held in the rural hills and starting and ending at a small and cramped grange. While the course was essentially the same this year, the main contact point was changed to  Zenith Vineyards – a location every runner of this race has run past since 1983. This location change meant a wonderful venue to stay warm and dry in and moved parking from miles of cars on the streets, to some parking spots on site.

While numbers have always been high, I think that this change, along with the fact that it was moved away from Super Bowl Weekend, made people a little more planful and ready to race. What that meant is that the parking lot for the 10am race was already packed by 9am. This wasn’t really a surprise, as the race sold out at 300 participants and there were only 110 spots to park. I thought arriving an hour early would get me a spot, but I wasn’t that bummed to have to take the shuttle from just up the hills another 3 miles or so. If you followed our IG story, you may have seen the snow immediately start coming down as we climbed in elevation, and when I ended up parking in the overflow lot, this is what I was greeted with. 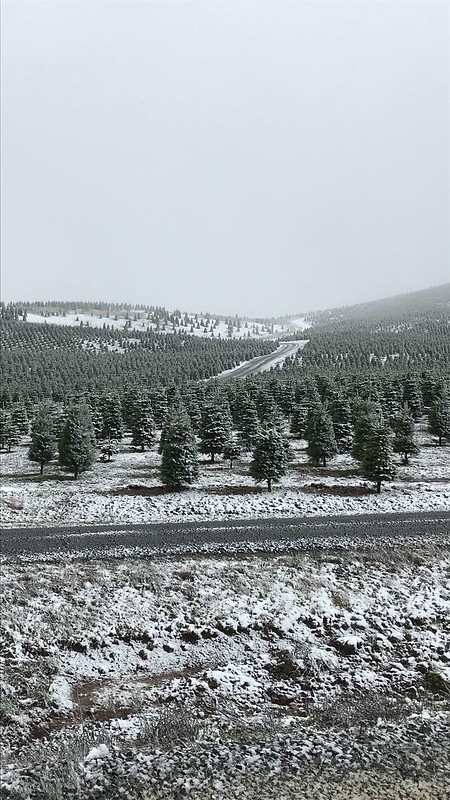 Turns out my wife, even 3000 miles away, can be right on things.

I am pretty sure that the snow was a surprise to most people – runners and race staff alike. While there was mention of shuttles being able to take people back to the start line, I ended up waiting in a line beginning at about 920am – and it  took at least 15 minutes for the shuttle to arrive. This was in the form of a 12 passenger van, which definitely wasn’t going to trek out the line of at least 50+ that formed (and growing). We did see a West Salem High School “short bus” eventually arrive, so I’m wondering if their was some sort of snafu that occurred due to the weather (busses not being able to operate appropriately on the snowy hills, vans not being to travel as quickly due to needing to drive slower than anticipated, etc). Regardless, this did push the race start back a half hour – something that was not ideal for some people. I personally didn’t have an issue, as my day was completely void of any real responsibilities after running (for once).

The weather at Zenith, though only just a few miles away from a blanket of snow flurries, was an off-and-on mixture of blue skies, rain, and eventually snow. Once all of the shuttle runners arrived, we toed the start line in some really brisk weather and a rain/snow mix that chilled me to the core. I had never been so ready to hit the road for a race before!

For those of you who have run Zena before, specifically the 9+ miler, you will remember that the longest distance had always started with a steep climb right off the bat, followed by a steady rise for the first 3 miles or so. This year, that section didn’t hit until around mile 4 – which actually could be considered a good or a bad thing. The good was that runners weren’t immediately gassed like in year’s passed, but the bad is that ~30 minutes of running energy had been expended already. No matter which way you slice it, it’s still a challenge.

It was made especially challenging this year given the fact that there was (at least for me), a pretty strong crosswind which, when combined with chiiiiilly temperatures, wasn’t exactly the most pleasing on the body. But what was absolutely awesome was that as we climbed, the light rain rapidly changed into snow – big flakes that was covering the surrounding hills, but not sticking much to the ground below. It was a really serene feeling and one that I could get used to (for maybe a race or two at least). 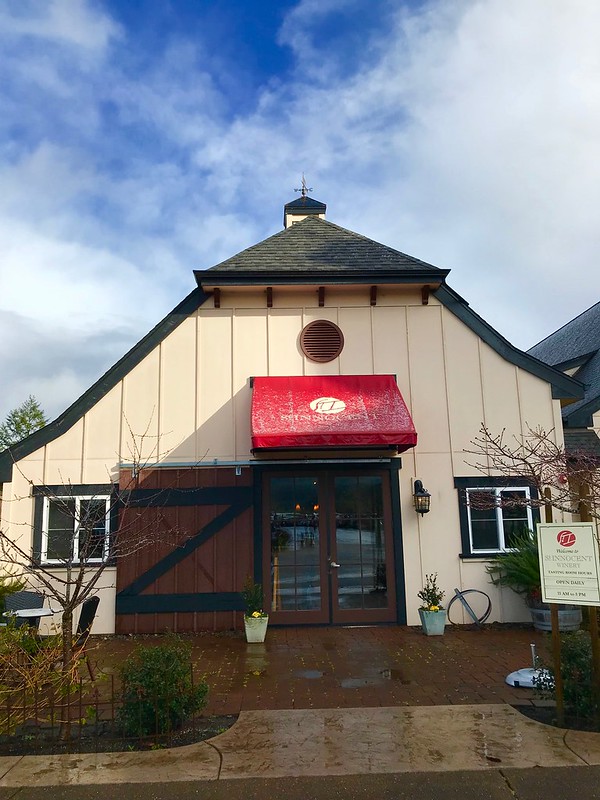 Once runners pinnacled around mile 7.5, the final two miles were a consistent downhill to the finish. I actually liked this a lot better, as downhills aren’t my knee’s favorites and I knew that I wouldn’t have to hold anything back, as I would have had to in previous years. That meant, I was gonna just gonna fly as best as I could back to the winery.

After the race, there was warm gluten-free food options from West Salem’s newest restaurant and an opportunity to sample some fine wines. There was also an awesome raffle giveaway as well – a coffee can of quarters! This running event was founded by Chuck Bowles, and the first ever event cost just a quarter to enter. Everyone was asked to toss a quarter in the bucket, and one lucky winner won the whole can – an homage back to 50 years ago!

While I obviously did not run the shorter distances, I heard from some of those who did and it seemed that this year’s event was much more difficult than in years passed. 3-mile and 6-mile runners went west out of the winery for an out-and-back, while 9 milers headed east for the loop. The first half of both the 3 and 6-mile races were essentially a significant uphill climb with minimal leveling off. I can attest to this, as it was the portion at the end of the 9-mile race that we were cruising down. I was thrilled I didn’t have to run up that! But if you made it half way, it was all quick and smooth sailing downhill back to the finish!

Overall, I was thrilled with the modifications to Zena Road Runs. I have run this a handful of times over the past 6-7 years, and always lamented the fact that the wineries in the area weren’t more involved. I hope Zenith or another one of the local wineries, continue to be involved and push this forward into the next 50 years! I highly recommend keeping this on your radar for 2019 – as it is a fun, challenging, and cheap option to add some miles and races to your log!