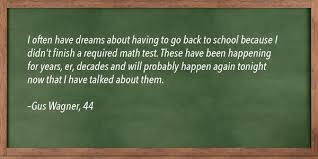 You know that common nightmare of waking up on the day of a college final exam after it’s already started? I don’t get that nightmare, although it’s possible that I’ve been the source of it for others given my day job. However, the other night, I had a variation involving – not surprisingly – running.

In my dream, I found myself at a bed and breakfast in some kind of coastal town. I knew that the race had already started, but for some reason, I wasn’t in a rush to get there. Maybe there were wave starts and I had a late wave (although I haven’t actually run in any races with so many participants as to need waves spread out over 30 minutes).

Anyway, I wasn’t worried as I waltzed down the wooden boardwalk toward the start of the race. But as I got near the start (and it was a dream, so the details about the starting area are pretty fuzzy, though it was Uberthons), I realized with horror that I had left my racing bib behind at the bed and breakfast!

Although it had seemingly taken me only a few minutes to get where I was from the bed and breakfast, the return trip now was going to take over 20 minutes! (Who can explain dream physics?)

I raced back to the bed and breakfast. The restaurant next door was advertising its dinner menu through the weird approach of putting out a dozen or so plates with those translucent cafeteria covers over the entrees. Eeewwww, I think it was a seafood restaurant!

And then I woke up….