“Daddy, are you going running today?” asked my son with excitement.

Was it that he wanted to go running with me?

Nope. You see, he has a Pokemon Go account but no smartphone, so mostly it’s my phone that gets used to catch Pokemon, battle in gyms, etc. Lately, on some occasions, I’ve gone running with the app on instead of listening to audiobooks, and I come back from those runs with a whole bunch of loot.

For those who aren’t familiar with it, Pokemon Go is an augmented reality app for your smartphone. It uses the GPS/map function to identify your location, and then it overlays various Pokemons (creatures), Poke stops (caches for items), and Poke gyms (arenas worth in-game currency). As you move around, you encounter different Pokemons, which you can catch using Poke balls. You add the Pokemons to your collection, and eventually you can power them up (increase their combat ability) or, sometimes, evolve them into more powerful creatures.* To get the Poke balls and other items like raspberries, which help increase your chances of catching Pokemons, you go to Poke stops. These are located at landmarks – many churches, notable points of interest, all Starbucks cafes, and so on. You can collect at a single Poke stop every 5 minutes.

* You have to avoid thinking too much about the morality of the situation, as it’s kind of like capturing wild animals, sending them off to be experimented on by the Professor, and making them fight one another in the gyms. 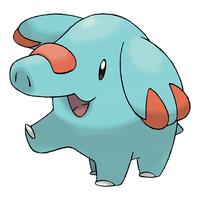 My favorite Pokemon: the Phanpy

In addition, you also can collect Pokemons by hatching them. Occasionally at a Poke stop, you will get an egg. These are labeled either 2K, 5K, or 10K eggs, which denote how far you have to walk to hatch them. The 2K eggs produce the weakest Pokemon, while the 10K ones produce the more powerful ones. This requirement of walking eggs to hatch them is one of the features of Pokemon Go that has some health/medical professionals calling it a game that’s good for your health.

Running, of course, is more time-efficient than walking, so that’s what got me to try running with the app.

Not so fast – limitations on running with Pokemon Go

The last thing Pokemon Go wants to do is to encourage people to drive to hatch their eggs. That would be too easy, and not health-conscious at all. So if you are moving too fast, the app will realize that you are not on foot, and it will warn you that you should not play Pokemon Go while driving. You can tap “I’m a passenger,” and it will then let you play, but it will not count that distance traveled toward egg hatching. (Even as a passenger, there are limitations on what you can do, though; at speeds above 30 mph, you really can’t even collect at Poke stops.)

That limitation doesn’t really affect runners, because other than sprinters, you aren’t going to be running at a pace fast enough to trigger that warning. However, Pokemon Go has a second limitation on how fast you can move for the distance to count toward egg hatching, and that is somewhere around 6.5 mph. Casual walkers will be well below 6.5 mph, but that’s a 9:15 minute/mile pace, which is well within reach of many runners.

I didn’t know about this second limitation one night when I did a tempo run at a 7:45 minute/mile pace, and felt ripped off when my 6+ mile run should have hatched a 10K egg, but seemed to add only 0.5 miles(!). Then I discovered that limitation. Now I only run with Pokemon Go for long slow distance runs or recovery runs.

Another thing to watch out for when trying to hatch eggs: Pokemon Go calculates distance traveled by measuring the distance between point A and point B, with points A and B measured two minutes apart. If you are running a loop that takes you two minutes each time, the app won’t think you’ve moved at all. For maximum distance traveled, you need to run in a straight line.

Pokemon Go overrides everything else

Before I downloaded the app, I thought I could leave it on in the background, get credit for the mileage run, and still listen to audiobooks. Then I discovered that the app overrides everything. If you’re running with Pokemon Go, you’re not listening to audiobooks or music (other than the Pokemon Go music).

Planning your run based on Poke stops

Since I can’t listen to anything else with the app running, I’ve taken to planning my routes with Poke stops in mind. (The Pokemons themselves spawn somewhat randomly.) On a recent 5.5 mile run, I managed to collect at 17 Poke stops and 6 gyms. That works out to approximately one Poke stop or gym every quarter of a mile, so there’s plenty of action to look forward to.

Expect to slow down and take, um, breaks

I’m generally able to collect at the Poke stops and gyms without breaking stride, but the same is not necessarily true for catching Pokemon that spawn along the way. The easiest thing to do is to leave them and continue on, but there will be times when you see a Pokemon that you’ve never caught before. The game encourages you to complete your “Pokedex,” which is a listing of all creatures that you’ve caught.

The Obsessed Fortysomething Runner: 2016 in Review

The Obsessed Fortysomething Runner: Six ways in which running has warped my thinking

The Obsessed Fortysomething Runner: The 8 stages of a 5K, through songs

Council Crest is always worth the climb. 📸 by

Whether you are tackling a 5k or 26 miles, your ru

Took in a little #salttherapy at the brand new @my

Put a little color in your Black Friday with the n

You know it’s true. Have a great #turkeytrot eve

Been enjoying these runs with no puddles lately.

A little winter running in the Gorge. 📸 by @r

The Waterfront Loop may just be our favorite “ci

A little trail work morning at the Forest Park Rak

Who is still enjoying this sunny, chilly autumn we

What an epic weekend at @alpine.running Run the Ro

Harkening back to our weekend #runcation in #South

The @mizunorunningusa Wave Neo Wind is a beautiful