Remember when Pokemon Go was a big thing? Wait, it’s still a big thing? I may be revealing signs of my age again. Oh well. But that’s kind of how trail running shoes are right now. They have been super hot and popular over the past several years and are showing no signs of slowing down in popularity. Several brands have worked really hard to provide solid choices when it comes to trail shoes, and Topo Athletic is no exception. While I certainly did not set out to become a Topo shoe expert, I am currently testing my 11th pair of their shoes with their new Runventure 2 trail runner. I have put 5 solid runs together that range in distance, elevation, technical nature of the trail and weather. After nearly 50 miles, I am ready to share some feedback. 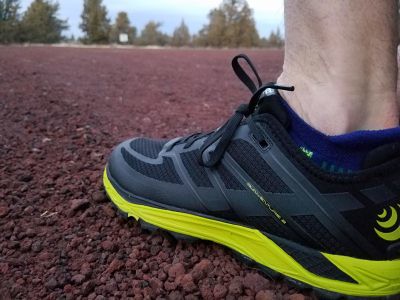 Out of the box: Compared to the majority of trail shoes out there right now (pick your brand), the Runventure 2’s are lighter than most. This is a definite plus for a solid trainer and even as a race shoe. I’m testing the Black/Green color combo which look good, but more importantly, fit well. I wear a 9.5 in most shoes and these fit true to size. But where I differ from some is in the width of my toe box, which is an E. This is where Topo really shines because they have put an emphasis on the toe box in every shoe they make.

First run: My first run was a short one on gravel/dirt road. Because it was a fairly flat route I didn’t have any issues with traction or control. I really enjoyed the heel cushion, the roomy toe box and the zero-drop platform (I typically run in zero-drop). After 5 quick miles, it was time to really kick in my new kicks.

Second run: I live in Central Oregon and am fortunate enough to be 5 minutes away from the mecca known as Smith Rock. The elevation gains/losses and technical nature of the trails up there are a great place to truly test out a pair of shoes. Knowing that I wanted to get a good read on the Runventure 2’s, I ventured out for 14 miles on a cool but clear day. My first thought was how thankful I was for the weight of these shoes, but if I’m being honest, I was not real thrilled with the traction. In nearly every steep climb I found myself slipping and sliding. And while this only occurred on the steep climbs, it was still a bit of a red flag. To be fair, the trail dust up there can be tough, but that’s why we test stuff out, right? The overall feel of the shoe remained absolutely solid, especially on the downhills, where I pushed the toe box extremely hard. The flats and rolling hills were more than manageable, as the Runventure 2’s remained strong and agile. 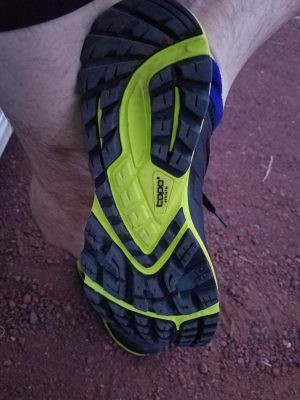 Runs 3, 4 & 5: My next couple of runs found me on more flat to rolling trails where the heavy lifting of hill climbs was not as hardcore. Run #5 was really fun as I ventured into an inch of fresh snow over 9 miles. In the case of that last run, the Runventure 2’s were stellar in maintaining traction in the fresh white stuff. This was a nice bonus after being a little concerned with how they did on steep climbs.

Overall grade: I am excited about the Runventure 2 as a solid addition to my trail running gear. While I remain concerned about the traction on steep climbs, I am thrilled with how they handle and wear in every other condition. I would give the Topo Runventure 2 a solid A-.