I love trail running shoes and for the past ten years, I have specifically loved one specific trail running shoe.  I have approximately 20 pairs of said shoe and although I have tried several others, nothing has ever come close to my tried and true. But then…I tried the Hoka One One Challenger ATR 4 and my trail running shoe world was rocked.

I have heard a lot about Hokas and how much people love them but I am a runner stuck in my ways.  I know what shoes I like and I don’t stray from that.  Slowly, I started to see my family and friends change to the Hokas and my curiosity peaked even more.  My dad, who has been a runner his whole life and swears by what he wears, suddenly switched to these shoes that just looked so different to me. So, I was excited and apprehensive when I received the Challenger ATR 4 to try. 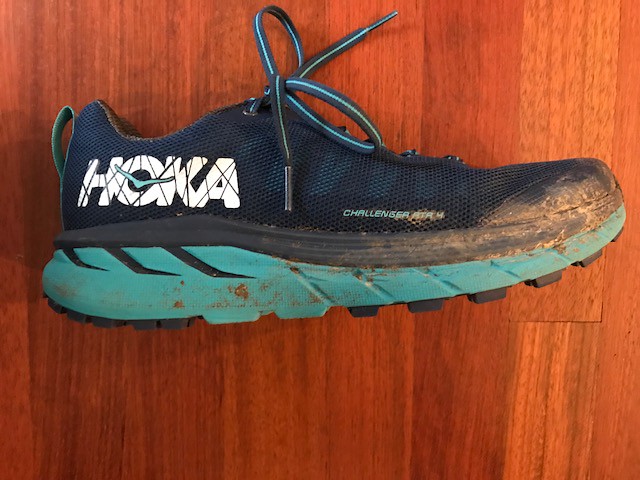 I pulled them out of the box with anticipation when they arrived and looked at them in a bit of bewilderment.  They are thick-soled and look like nothing I have seen on the market, ever.  The base of the shoe isn’t what I was used to either.  Instead of narrowing in by the foot, the arch, the Hoka has a small narrowing from the toe box but then stays even in width with the heel of the foot, creating a nice solid base.

The first day I strapped them on, not going to lie, I was a little wierded out. 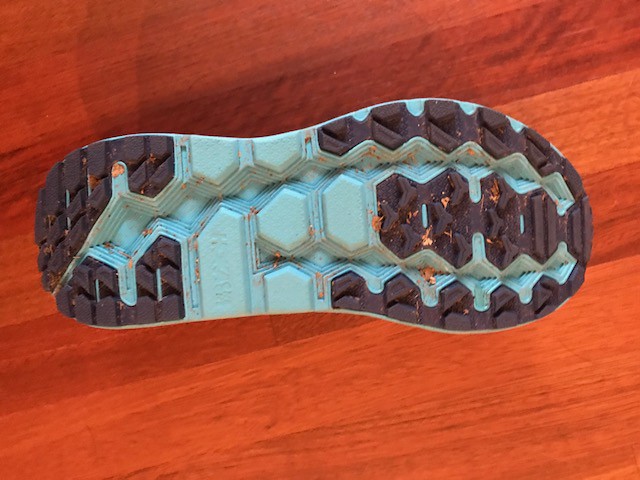 They feel completely different than any other shoe. They are soft, yet solid, and most distinctive is they give you a sort of “rocking” motion as you move through your stride. With the larger base and thicker sole, you immediately think the shoes are going to be heavy but they are extremely light. They felt, as I like to describe only my favorite running shoes, like little pillows on my feet. Only these pillows rocked and propelled me forward, almost enticing me to start my run.

I first wore these shoes to teach my boot camp class, knowing I was going to hit the trails right after class and wanting to get a sense for how the shoes felt. They felt different, but great. The one thing I noticed while teaching is the upper comes up to my ankle a lot closer than I am used to. I am super sensitive to the way shoes press on my feet so I was a little worried about how much this would bug me during my run. However, I understood that they were trail shoes and this design makes complete sense to keep out the trail debris. 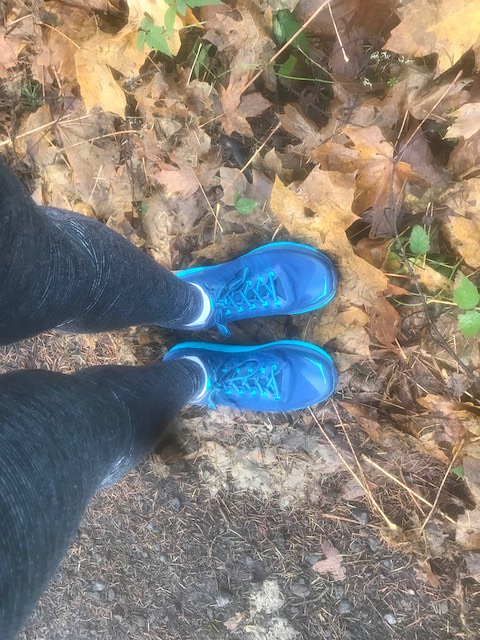 blue shoes. I stepped out onto the trail and could immediately tell the grip was unlike anything I had felt on a trail shoe. For one, I couldn’t feel the tread grips pressing into my feet, which I appreciate. Secondly, the grip was phenomenal.  I felt like I could fly down slippery, wet Oregon trails and these shows would hold me. And, well, as I found out on my run, they did in fact hold me. And they held me on every terrain. I hit cement, rocky paths, muddy paths, wood bridges, stairs and more. I even tried to tromp through the grossest parts of the trail to see if they would let me down.

And by the end of my run, I also realized that the higher upper did not bother me one bit. One of my biggest apprehensions with trail shoes in the past and even with my tried and true trail shoes, is that due to the uneven terrain my foot is often pushed and rocked onto weaker parts of my foot, including a broken bone in my toe that gets flared up quite easily if I am pushed onto it. The Hoka is the first trail shoe that I felt even across the soles of my feet for the entire run. I walked away with zero toe pain or any other pain, which is pretty unheard of for my trail-unfriendly feet. 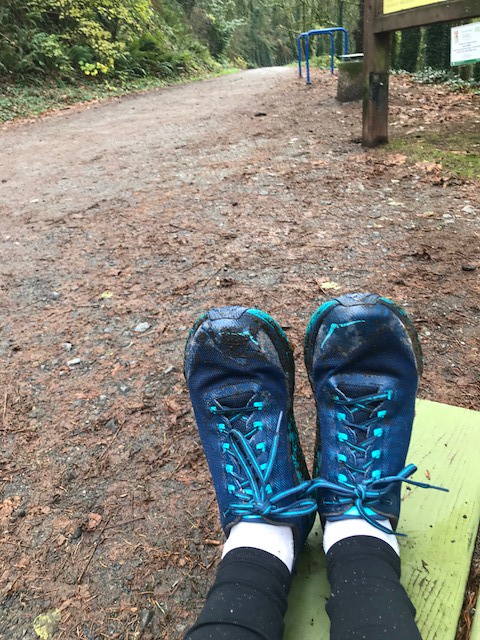 A few days later I hit the slowly inclining, muddy, rocky, and uneven trails of Leif Erickson in Portland. I love this trail, it is probably my favorite. But it is rocky and you can, quite frankly, feel every rock under your feet as you run up the trail. Again, I hit the sloppiest parts of the trail and tried to challenge these shoes to let me down. And again, they did not. They held solid and propelled me up the trail steady, soft, and supportive. When I finished, I was converted. I knew then that I had officially become one of those crazed Hoka fans. These were the shoe for me.

So, I am officially converted. It happened. My former trail running shoes that I have sworn by for ten years have now been replaced with the Challenger ATR 4 and I am excited about it! I am finally excited to hit the trails again, knowing that I won’t have to deal with residual pain or any other issues. Not only that, but I was incredibly impressed by the technology of the Hoka. It is extremely innovative and intelligent.  It is exactly what I think the running community needed. I was so impressed with it, that I am also including their road shoes in my rotation now. If you haven’t tried these shoes yet, look past the funny look of them and just try them. I promise you won’t regret it.

Company: Hoka One One

More about Hoka One One:

While the minimalist trend was in full frenzy, we were winning mountain trail races and ultra marathons in our crazy-looking shoes. The smirks at midsoles twice the thickness of other running shoes soon turned to “ahas”, as runners tried HOKA ONE ONE and felt the difference. Light and surefooted during a race, with more cushioning at the end, HOKA makes runners feel like they’re gliding over the ground.