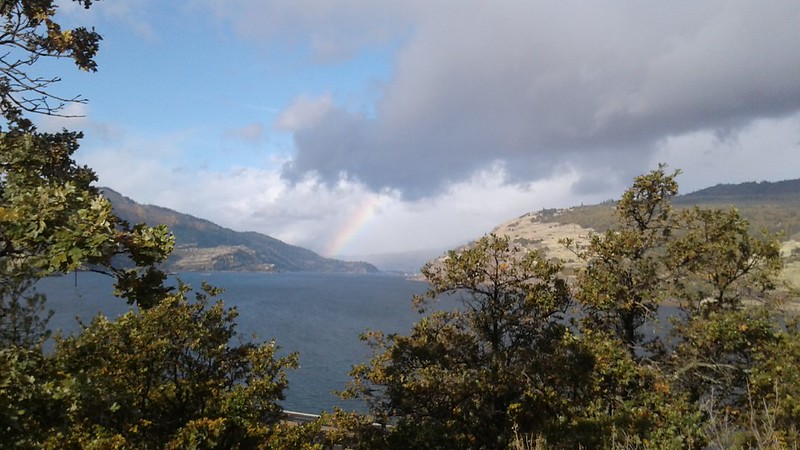 A photo from the Historic Columbia River Highway Trail, part of the course for both distances at the Columbia Gorge Marathon and Half Marathon.

I didn’t decide to run a Marathon until about six weeks before I toed the line for the race. I’d been having a great training cycle and my long runs felt easier than they have in years, so I knew I’d regret it if I didn’t run a Marathon this season.

I set about finding the perfect race. Unfortunately, this year proved difficult to run a fall marathon without having to leave town … after the drama with the Portland Marathon and the cancellation of the Vancouver USA Marathon, I knew I’d have to look a little further away. Fortunately, there were two races that fit into my schedule: the Columbia Gorge Marathon and the Tri-Cities Marathon. It came down to asking myself whether having a certified, faster course and BQ at Tri-Cities outweighed all the positives of the Gorge Marathon. In the end, I decided that a shorter drive and scenic course were more important than earning a BQ. The 2017 Columbia Gorge Marathon was run on Sunday, October 22.

During the week prior to the race, the folks at Breakaway Promotions emailed all participants the Competitor’s Guide (a 4-page PDF) which outlined everything we needed to know about the race logistics. My family and I left Tigard around 1:30p on Saturday in order to swing by Shortt Supply in Hood River for packet pickup. We arrived in Hood River right when packet pickup opened at 3p. It may be wise to show up later if you’re doing this race in the future, because it seemed that everyone had the exact same plan I did, and the line to pick up my packet stretched out the door and into the rain. Luckily it wasn’t too cold – I just didn’t have a raincoat or an umbrella with me. Fortunately those waiting in line were all very patient, and the volunteers inside the store were friendly and efficient. It took about 45 minutes before I was back in the car and heading to our hotel in The Dalles. Another pro tip, if possible, book your Hood River hotel early. By the time I registered for this race in early September, every hotel room in Hood River was already sold out.

Kelly and I left our hotel room in The Dalles around 7:45a and made our way to the start line 30 minutes away. The plan was for her to drop me off at the start line and head on to Mosier, where she’d meet me at miles 5 and 18 to check in and see if I needed any aid or wanted anything else. She’d get her run in while waiting for me. Those without someone willing to drop them off could use the shuttle to get from the parking/finish line to the Marathon start.

I arrived at the start line about 45 minutes before the 9:00a start. The nature center was open at the Mark O. Hatfield Trailhead, so all runners had a warm place to relax before starting. The big question looming in everyone’s mind was, “Will the rain hold off?” Saturday saw record-setting rain, and the forecast for Sunday was supposed to be better but still wet. I was resigned to the fact that I’d get rained on and would be battling a 10 MPH head wind in the second half. I made my peace with this earlier in the week. However, making your peace with something isn’t quite the same as wanting it, and everyone around was giddy with the thought that the next 26.2 miles might not be as bad as they thought.

The race took off right at 9:00a after a few instructions and not much fan fare. The course really is the highlight of this race. The marathon is never flat and has two major climbs with some rollers in between, along with three pretty substantial declines. Brian Bernier did a great job of describing the beauty of this course after he ran the half in 2015 – read his 2015 post here and his 2016 recap here. I agree with everything he said about the beauty of the course. I will say that the bald eagle flying over my head in the 2nd mile was a nice touch. He landed on a cliff above my head and watched me run by. 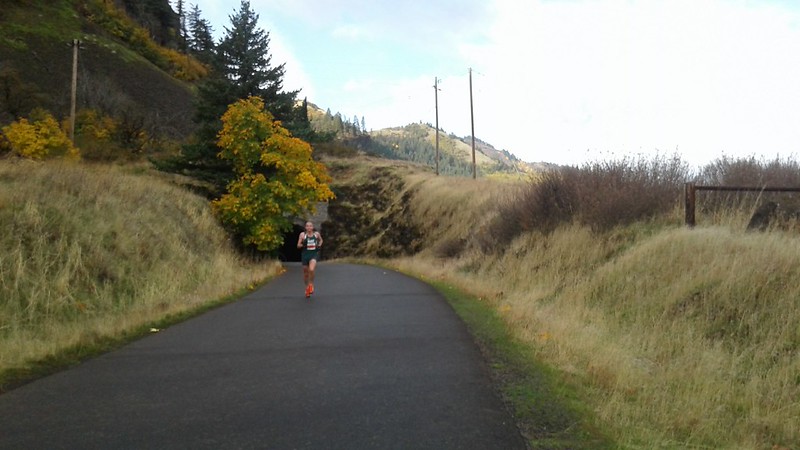 Eric Barten just after passing through the Twin Tunnels near mile 4 of the Marathon.

My race went pretty much according to plan for the first 20 miles. I had a tail wind pushing me on the way out and felt great. Kelly was there to cheer for me at miles 5 and 18 and there were aid stations every 2-3 miles. I took my Gu and water at the normal intervals. By the time I started the final climb around mile 18, I could feel things coming apart at the seams. I made it up the final ascent (mile 18-20) just fine, and started heading downhill for about a mile, but there’s one more short uphill before continuing the final descent into Hood River for the finish. That little hill around mile 21 was where the wheels came off for me. As soon as I went from downhill to uphill running, my muscles revolted and the calves started cramping. Even though I was running downhill, my pace slowed down to what felt like a crawl for the remaining miles into Hood River.

At the finish, I was greeted with a cheering crowd for the final quarter mile – many half marathoners were finishing their race and the support was definitely nice even though most of it wasn’t for me at all. As soon as I crossed the line, I was able to stop running and walk into a giant warm tent. The runners are able to help themselves to a taco bar and soup. Kelly and I stuck around for the award ceremony at 2:30p to get my 1st place award and headed back home. We arrived in Tigard just a little over 26 hours after we left the day before.

This race was exactly what I needed after a four-year layoff from running marathons. I was able to get a feel for the distance again without spending multiple days traveling. And I got to run a scenic course at a race put on by local organizers – all in all, a great weekend trip for an excellent race. 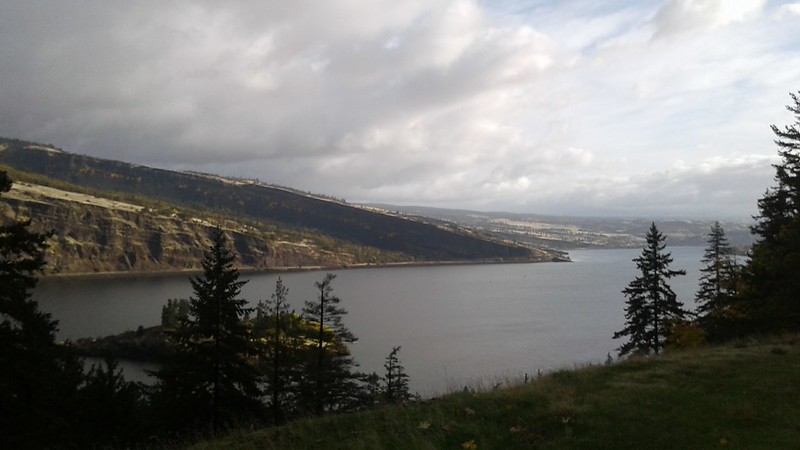