The inaugural Oakridge Triple Summit Challenge was a 3-day stage race (3 different trails/summits, 12-13 miles each day, all out and back). Each race was held on a different trail near Oakridge and runners had the option to of entering a single race or completing all 3 races to attempt the Triple Summit Challenge. The final day also had a 5k run. Oakridge is a trail runner’s paradise, with hundreds of miles of forested trails, all turning bright orange and red with fall colors. Each day had awards for 1st, 2nd, and 3rd, male/female, as well as a king/queen of the mountain for the first male/female to reach the top.  There were also awards for the top 3 male and female Triple Summit finishers, with the combined times for all 3 races. I decided to sign up for the Triple Summit, because who doesn’t love a good challenge?

Day 1 was an ascent up the Alpine Trail, 13 miles and 3,900’ elevation gain, though my watch said it wasn’t quite so far or steep. This day was pouring rain and 45 degrees- not quite the weather you hope for on a trail run! There were only 10 runners that laced up the first day. The race director did a wonderful job ensuring that everything went smoothly and started on time, even with the challenges of the rain (and a stolen aid station tent from the previous night!). I was dreading stepping out from the shelter to begin the ascent and envisioning cold wet feet.

The camaraderie at the starting line between all the dedicated runners helped to get motivated. The race started near the parking lot of the Alpine trailhead and began climbing almost immediately. The trail was beautiful, wooded singletrack with moderately graded switchbacks and two aid stations that you hit on the way up and back as well as one at the top. My legs were grateful for a short flat section at mile 1.5 and again at mile 3 before the last long ascent to the turnaround. The rain never let up (and turned to snow at the top!), the trail was literal rivers of water, but once I crested the summit and started downhill I was feeling wonderful. The trail was perfect for bombing down, not too rocky, just the right slope, and with already soaking feet you didn’t mind if you landed in puddles! Before I knew it my feet were warm and I was grinning and passing the last aid station only 1 mile from the finish. 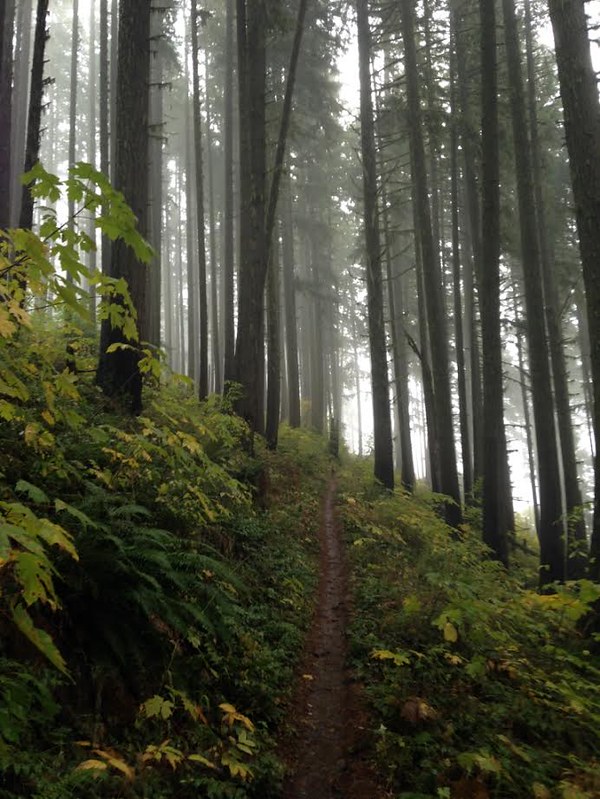 There were snacks and drinks provided after the race, but due to the pouring rain (and being soaking wet), everyone scattered pretty quickly. I headed to the closest diner for a nice big breakfast and then to the laundromat since I would be camping out all weekend. I also knew about one other benefit to running near Oakridge…McCredie Hot Springs! I have to admit I took advantage of these springs, just 10 minutes outside Oakridge, every afternoon after running.

On day 2 I woke up stiff, but ready. The rain had finally stopped though it was still overcast and cold. The day’s ascent was Dead Mountain, which I quickly realized was a fitting name since I wanted to die by the end of the race. Things started innocently enough with just 9 runners at the Flat Creek Trailhead (this name was not fitting). The first half mile was fast and flat, following the river through beautiful fall foliage. Then we crossed a road and started up some mellow switchbacks that gradually became steeper. We passed the first aid station at 4.5 miles, and already my energy was flagging.

Then the trail was filled with mountain bike rollers and banked turns, which killed your stride as your pace decreased and increased cresting the hump. The last 500 yards were practically stairs before topping out on a forest service road and following the road around to loop back to the same trail back down. For me, the descent was really rough – the forest service road was so steep that I had to check my speed, and the rollers were even harder going down than they were going up. My knees and hamstrings were screaming all 6 miles, and the last half-mile to the finish seemed to stretch on forever. Total mileage was 12.4, with 2,650’ elevation gain. I was definitely not expecting to feel so bad on day 2! 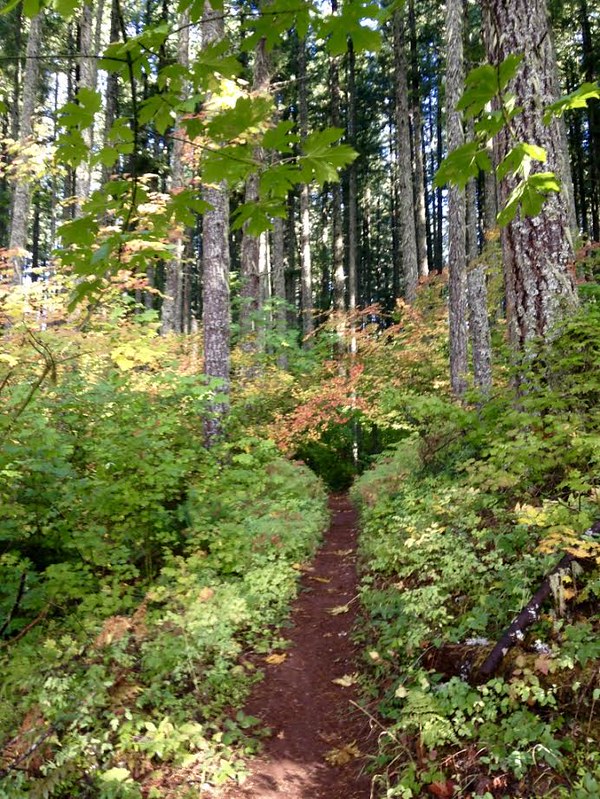 I hobbled out of my tent on day 3, grateful for a perfect sunny day. The last race started an hour later because there was also a 5k race held through Green Waters Park. Sunday’s trail was an ascent of Larison Rock for 12.4 miles and 2,500’ elevation gain (my watch read 11 miles and 2,600’ ascent). This day was by far the most fun with the best trail, view from the top, and weather. We ran through the park and over the bridge across the river, then followed a road slightly descending for a mile until the trail veered into the woods.

The ascent was gradual but constant and it’s the weirdest thing, but my legs felt as though I’d already run a marathon! Sunlight streamed through the trees as we ran along a ridge before hitting the aid station and the final switchbacks up to the summit. Once there, we had to scramble up a short section then tag the rock on top before heading down. The view is expansive from the top, looking out over National Forest as far as you can see. Unfortunately I didn’t take the time to soak it in before turning and heading down. 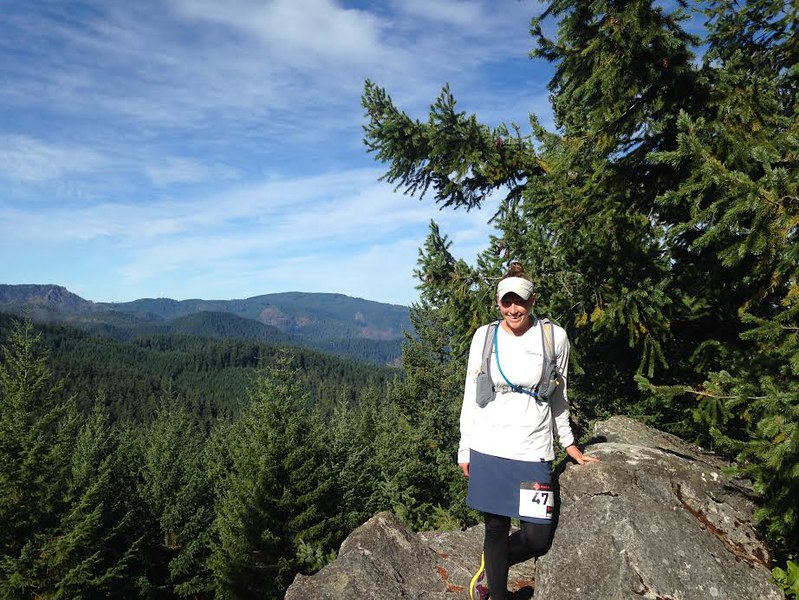 The descent was so fast and so fun that I didn’t even notice my legs. The trail couldn’t have been more perfect to race downhill at max speed. Reaching the final stretch along the road, now slightly uphill, was tough but knowing you are so close to the finish made it bearable. Everyone stuck around the finish for the awards ceremony and it felt good to come in to cheers. Overall, I ended up second out of the women for the Triple Summit Challenge (okay, it was a small field, but still!). The first place male/female received a new pair of shoes from RunHub, and second and third place also received a prize, as well as medals for each day’s race. 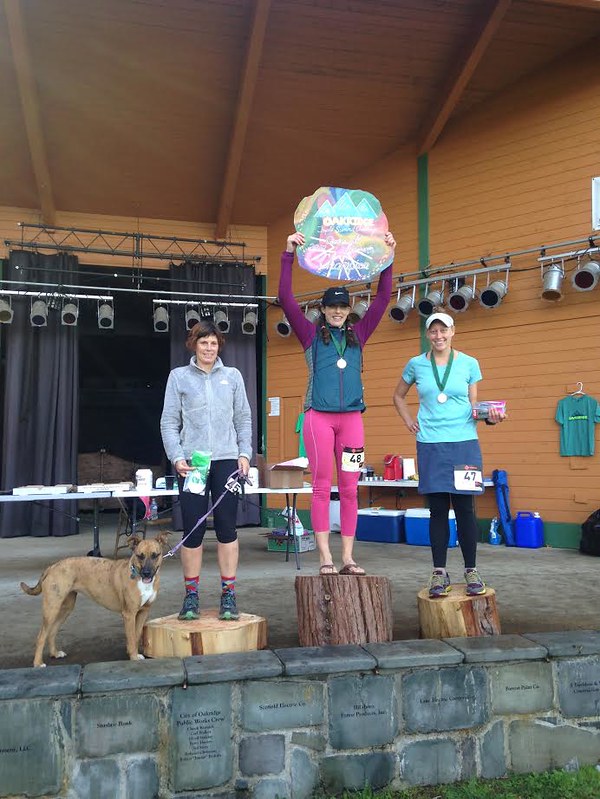 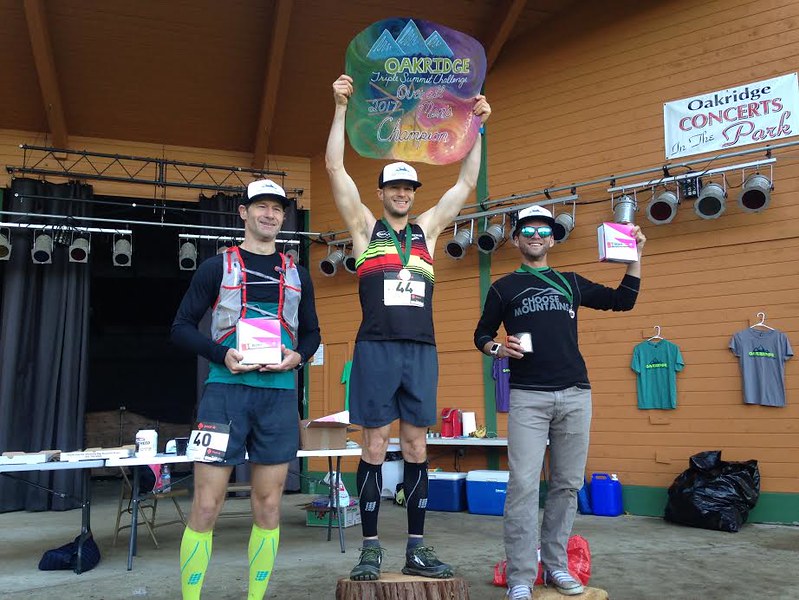 When I think stage race, I think ‘logistical nightmare,’ and I was very impressed with how smoothly everything went, especially since this was race director Devin’s first experience as RD. The course was well-marked with flags or baking flour, aid stations were frequent and stocked, the trails were well-chosen, and the overall experience was extremely enjoyable. I can’t imagine the time and effort that went into setting up a new course 3 mornings in a row and I am so appreciative of the hard work that went into it. This race has something for everyone – the endurance challenge of an ultra with the shorter distances and faster times preferred by non-ultra runners. I hope the Triple Summit Challenge tradition continues next year – and I highly recommend taking advantage of this unique race experience.

Click here for results and more details on this event! 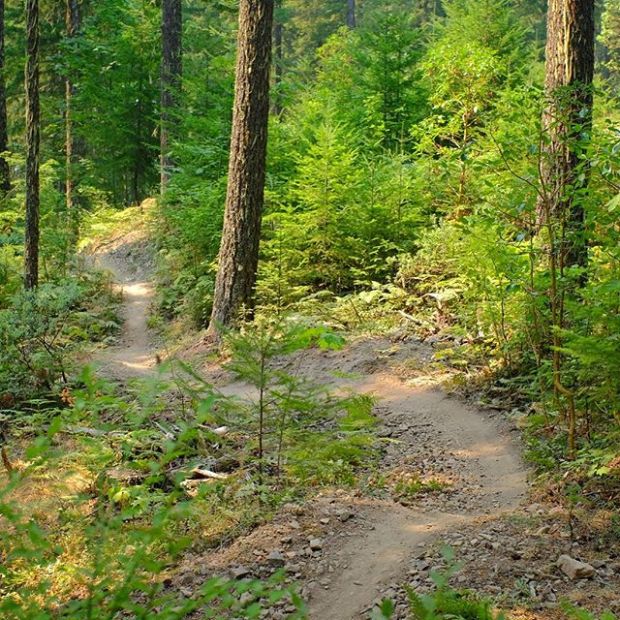