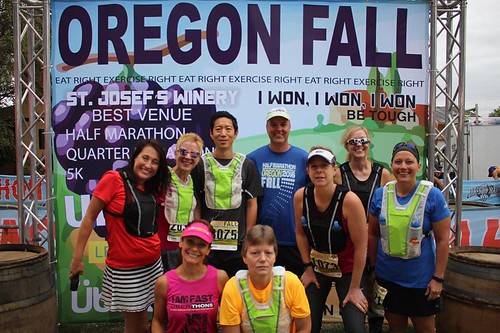 The event may have been named Oregon Fall, but it still felt more like summer than fall. Still, that the race was able to take place was reason itself to rejoice, considering that the air in the Willamette Valley during the past week looked and smelled like something out of Dante’s Inferno due to the out-of-control wildfires in the Columbia Gorge area. Seriously, who can forget the apocalyptic warnings that our air quality was worse than Beijing’s?

For much of the preceding week, I had a sore throat and a hacking cough, and I hadn’t even spent that much time outside. Uberthons sent several updates to registered racers, with links to the air quality reports and a “Plan B” in the event that it would have been unhealthy to run. Plan B was to show up at St. Josef’s Winery (the race location), enjoy the Qdoba catering, and have a party. I have to admit, part of me was kind of hoping for Plan B. Between the bad air quality and a developing bout of tendinitis that I was trying to head off, I’d run only three times in the past eight days for a total of 17 miles.

But starting the day before, the winds shifted eastward, blowing the nasty smoke and ashes away from the Willamette Valley. That meant no Plan B, which despite my earlier moment of weakness, was a good thing.

The half marathon start time was 8 a.m., with the quarter marathon following at 8:30 a.m., and the 5K waiting until 8:45 a.m. to get underway. All of the participating Uberthons Ambassadors (including me) had been asked to arrive at 7:30 a.m. for a group picture with everyone outfitted in the Road Noise safety vest/sound system, which creator Rob Stout had generously provided for us to test.*

* I’ll provide a separate review of the Road Noise vest after I’ve had more of a chance to test it out. I don’t listen to music when I race, and I don’t carry water for races, so it would have just been extra weight if I’d worn it on that day.

I had a lot of time to kill between that photo opp and the start of the quarter marathon. It was a shame that there was only one Pokemon Go poke stop in the area, and it was at the entrance to St. Josef’s Winery; otherwise, I would have made use of the time to gather some supplies. But really, there was nothing to complain about. It was a perfect morning: mild, clean air(!), and a fun atmosphere.

At 8 o’clock, we cheered the 275 half marathoners as they started in waves led by the various pacing groups.

Around 8:20 or so, announcer Margo Glass called for the quarter marathoners (~70 of us) to start lining up. Race director Darwin Rasmussen reminded everyone of the Uberthons’ credo, which is (of course) “fast people in the front, good-looking people in the back.” Apparently, this race was populated with the latter and none of the former, because there was a big empty spot in the front of the staging area. No one wanted to be not-good-looking….

Margo then called on me to line up in front. (At that point, I was still off to the side, chatting with some other runners.) Race director Darwin Rasmussen, perhaps concerned that I felt lonely up front, asked, “Does anyone think they can keep up with Tung?” I think the audience must have misunderstood the question, because no one stepped forward. I could have pointed out Joe Dudman and Paul Braghero, two guys who I would not have kept up with, but they were both running the 5K. 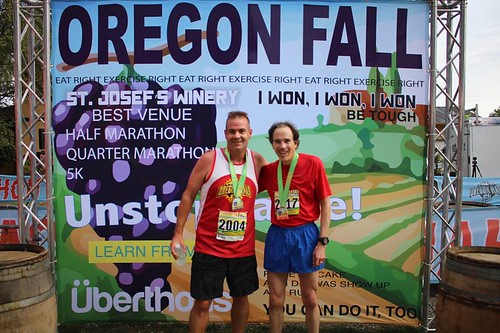 Two guys (Paul Braghero and Joe Dudman) who are faster than I am. Which means, in Uberthons terms, they are less good looking. 🙂

So when it was time to start, I found myself at the front of the pack. This probably worked out well in general for the race (not so much for me, as I tend to like starting a little behind the frontrunners) because I had run this course enough times to be well familiar with it, and thus I could lead the pack. (Only the half marathoners had a pace car leading them.)

All three race distances started the same way: back out the entrance driveway, right turn on Barrows Road, and right turn on Zimmerman Road. The 5K turnaround was just before the junction of Zimmerman and Needy Road; the quarter and half marathons made a right turn on Needy, and then a left on Heinz Road. The 10K turnaround came just after the intersection of Heinz Road and the Canby-Marquam Highway. The half marathon continued along Heinz Road to make what Darwin Rasmussen described as “lollipop top” loop before sending those runners back.

That’s the spatial description of the course. Altitude-wise it was mostly a flat course. I say mostly because it began – and ended with a tough little hill. Going out was not so bad with fresh legs and all that bottled-up pre-race energy. Coming back after 45+ minutes of hard effort, that was much harder….

Scenically, the course ran through a lot of wide open farmland. One location had a giant squash on the side of the road with a sign marked “Free.” Free is always great, but that thing was gigantic – carrying it would have been like running with a dumbbell!

I stayed in the front of the pack all the way through the quarter marathon turnaround, but shortly after that, Jonathan Seibert (#3061) passed me. Apparently I eased up once I was no longer in the lead (not intentionally, mind you) – my first mile was a little too fast, miles 2-4 were fairly consistent, and miles 5-6 were the slowest.

Speaking of mile 4, it was around that mileage marker that half marathoner Paul Rottich (#1284) came blowing past me. You know how sometimes you’re driving at the speed limit in the middle lane of the 5 and some car rockets past in the fast lane? Yeah, that’s what it was like. Soon after, half marathoners Zach Steele (#1307) and Dennis Brand (#1135) gave chase. Let’s do some math…. Those guys started about 30 minutes before I did. I figured on finishing in about 48 minutes, so if they were going to finish the half marathon in 1:18ish or better, they would be expected to pass me at some point. But when I still had more than a third of the quarter marathon left…?

After lollygagging miles 5 and 6 (relatively speaking), I sped up for the last rump 0.55 miles. Of course, that’s also where I re-encountered the dip that started us off. The longer, gentler slope was downhill on the return, leaving the shorter, steeper ascent. With a decent push, I managed to sprint to the finish line in a time of 47:20, in second place. In third was William Woerner (#3074), who had also finished just behind me in the Summer Quarter Marathon. (Not too bad for a couple of fortysomething guys!)

The reward for finishing consisted of a nice finisher’s medal and entry to the Qdoba chow line. (Remember Plan B? I could’ve just skipped straight ahead to this part of the recap!) The picture of my bowl loaded with vegetables and chicken might give the impression that I follow a Paleo or low-carb(?) diet, but there’s actually a bed of rice underneath. 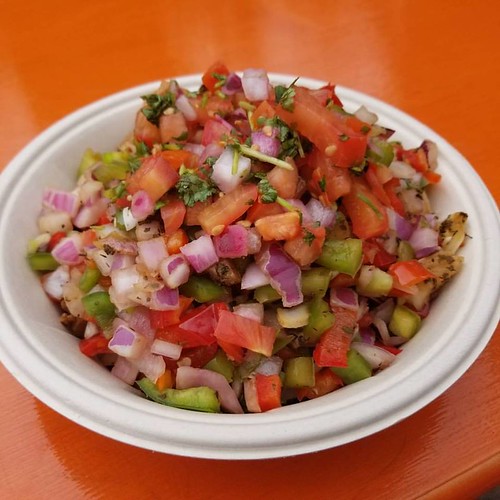 Overall, it was such a joy to be able to run a well-managed race in clean air! This was the fourth and last in the Uberthons seasonal events, and it was a perfect way to cap off the series. The people who ran all four half marathons were treated a couple of weeks later to a meal at the Old Spaghetti Factory, so keep that in mind for 2018. But that’s not the end of the year for Uberthons events – the Halloweenathon and the Turkeython are still to come.