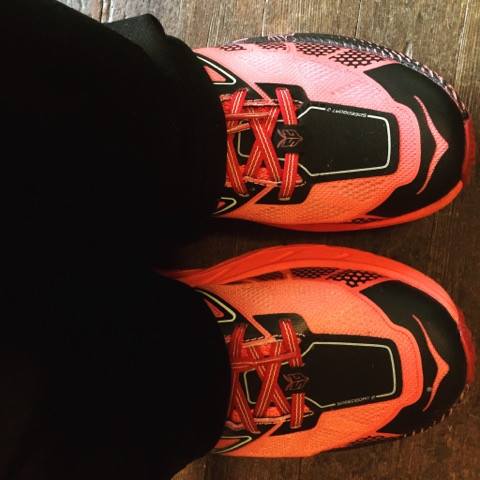 Over the last year I’ve found myself enjoying running trails more and more, especially during hot summer days. Escaping to the cool and woodsy areas in the metro area allow me to log miles a lot more comfortably. However, I have never worn a pair of trail shoe, partly because I don’t run on many trails and also because I didn’t think it made much of a difference as I mostly run on smooth trails. In Oregon though, it doesn’t matter if the trail is smooth or rough. Add in our notorious moisture and any trail can become technical and a bit dangerous. After ruining a pair of beloved road shoes with mud that I just couldn’t rinse off and a few *almost* twisted ankles later, I decided it was time to try out a trail shoe and see what all of the hype was about.

The Speed Goat 2 is named after ultra-marathoner Karl “Speed Goat” Metzler and his rugged 50K race in Utah. Metzler, (as described by fans and several of his sponsors websites) could be defined as a human capable of traversing switchbacks laden with various sedimentary, metamorphic and igneous rocks just like a goat. This shoe is definitely capable of handling all types of terrain. I tested the Speed Goat 2 on a wet and muddy trail, on asphalt and running stairs at the local high school track. These shoes are pretty awesome on all three different surfaces, but it’s intended surface (trail) was really what mattered for my review. 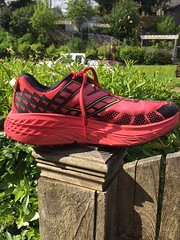 Comfort: Having a wide foot doesn’t bode well for a lot of choices when it comes to picking out running shoes. After reading the reviews of the Speed Goat 1, I was a bit skeptical that this shoe would work for me. I talked to a friend who wears Hoka’s and she told me that she often has to go down a size because Hoka’s are a bit too wide for her. After mulling it over for a bit, I went with my gut and ordered my normal size and hoped for the best. Luckily, I was rewarded with a shoe that fit amazingly well. The Speed Goat 2 has a roomy toe box* is surprisingly light and very supportive without being stiff or restrictive as stability can often be. I found it to wear more as a neutral shoe which made me like it a lot.

Durability / Support: Mesh design coupled with water-resistant material make it easy to keep them cleaner than most shoes of a similar material I’ve worn. However, I’m not sure how breathable the shoe will be come summer and early fall.

Style:  The shoe is rugged and looks hardcore without being too bulky. For a trail shoe, it is pretty streamlined. There are reflective tabs on the back that are a nice safety feature. While I wouldn’t describe it as a sexy looking shoe, apparently there will be two more color schemes to choose from when they become available for purchase next month. 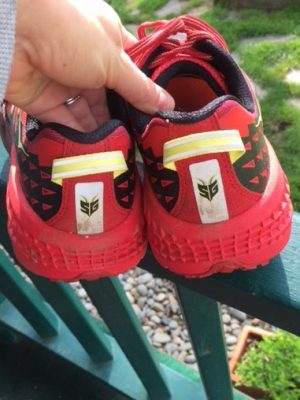 While I don’t plan on running any ultras (ever) this shoe is for the casual trail runner as well as the ultra athlete. The fact it can handle different types of terrain makes it an all-around fantastic shoe that provides as much neutrality as a trail shoe can. If you couldn’t tell, I’m a fan.

I’m looking forward to trying out more trails this summer in my Hoka One One Speed Goat 2. Want to try a pair for youself? You can purchase them starting in June with a retail MSRP of $140. Visit www.hokaoneone.com for more information on the release of the Speed Goat 2.

*one of the main complaints of the Speed Goat 1 was a toe box that was a bit narrower and could often pinch when their foot swelled after several miles. The redesign of the toe box on version 2 aims to remedy this complaint.

Abby was raised in Tigard, Oregon and moved to Denver, Colorado in 2007. While in Colorado she ran her first 5K, which led to a 10K, which led to a half-marathon. Abby moved back to her native Oregon in mid- 2015 and has since completed more 5K's, 10K's and more half-marathons. Abby's favorite distances are the 10K and the half marathon.