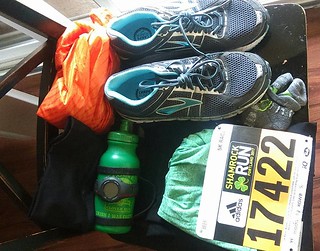 The race expo for the Shamrock Run was so much fun. The expo, by the way, is open to the public so go check it out next year. My oldest offspring, sporting her new buff with a running mantra printed directly on it at the expo, be-bopped up and down the isles, looking at all the goodies. We got to the car, picked up some dinner and early to bed. The next day, was quiet and relaxing and just general “day before the race” routines where I frantically look for my Garmin and then quiz everyone if they have seen the charging cable (why can’t all charging cables be universal on everything?!) Once I had my nice and neat pile of shoes, clothes, ID and running bib, we had another early night and went to bed.

Both my kids started to get sick in the middle of the night. Nightmarish, horror flick (think of that famous scene from the 1970’s “Exorcist”) type of sick. As I stuck to being a nurse, comforter, janitor and generally exhausted mother, I still held on to my overly optimistic high hopes that I’d make my race in a few hours. When the sun kissed the horizon and the damage on the battle field was assessed, I watched my hopes to compete in the race fly out the window as quickly as this virus had settled in.

We recovered. We persevered. I held out hope that with several, glorious, days of no sickness, I would get to participate in the Couve Clover Run. I had, after all, all my pre race packing done from the weekend before. I did this race last year, and loved it so much. Since my birthday is in March, this could easily become my “birthday tradition”. If… you know, life would work with me a little.

But no. If this was the season of “luck”, mine had ran out. A few short miles from packet pickup, I pulled the car over and cursed myself for not bringing a tub of Clorox bleach wipes with me. My youngest little sprite lamented, “Don’t worry Mama.  Only I’ll get sick.” My husband echoed her optimism as we pulled into the parking spot for packet pickup. My optimism was not so high.  Poor babe. This really was no one’s fault. I was, however,  still reeling from the memories of having been through the trenches last weekend. I grabbed my bib, held on to a fringe of hope as I smiled to the kind packet pickup volunteers and sped home. I watched as my oldest got sick and my youngest recovered and my stomach began to “not feel so good” at the stress of it all. With this all said and done, I have to confess I was a bit mad about it. I mean, it’s no one’s fault at all to get sick and I don’t fault my sweet kids. I don’t fault my husband’s crazy work schedule that I dealt with the first round of horror solo. You can’t really plan for it.  Maybe that’s what made me mad.  You can’t plan for it. Any control I ever felt I had on any situation was clearly tested here.

As I sat on the couch with sleeping kids in my lap, scrolling through happy faces on facebook with their race photos, I was mad. The icing on the cake? Some stupid running meme about “never being too busy” popped up on my facebook “memories” from one year ago. Pffff. Please. Who posted that?!  Oh.  Me.

Reflecting on it and trying not to move so the kids would stay asleep, I decided my anger was that something I had worked towards with training, something I had enjoyed anticipating the arrival of, some “me time” to escape a little of my home responsibilities… all of that was gone. But, you know what? Nothing is ever promised to us.  Even with hard work (and a bit of luck). It was a good reminder for me to look at the things I take for granted.

So, here’s to health, time to train, enjoying “the moment”, having a great race, and having fun with friends and family at the finish line.

At least I’m all packed and ready to go for my next race. (Just kidding.  I’ve bleached everything I own and could have breathed on.  I’ll have to keep an eye out for that Garmin charger.)